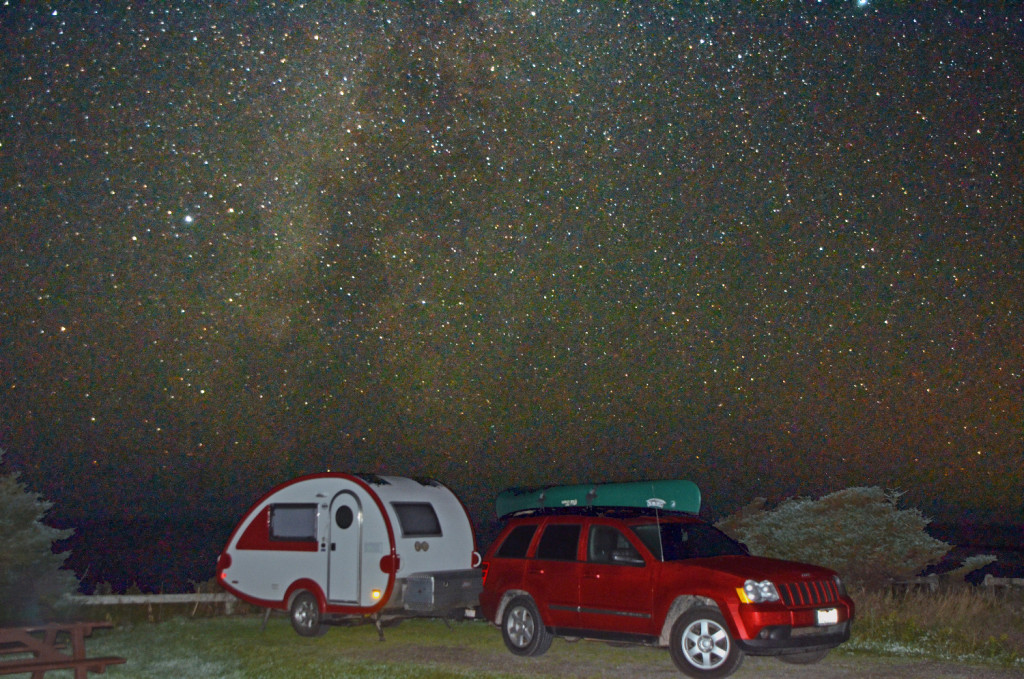 This page is for the folks who ask “How do you like that little trailer?”  My impressions of it and the various systems, as well as the upgrades that I’ve done.  The unique overall design, and the feel of the décor, made it feel special.  The smallish size, rounded ceiling, round portals and rounded top of the door made me think of a hobbit hole.  Warm and cozy, unique but not over the top.  Funny that it matched the color of the Jeep so well that they look like a matched pair.

The trailer is a T@B M@X “Q” model, plus the front window and side portal window.  They pronounce the @ as an A, so say Tab Max Q.  Nice kitchen, big bed, no toilet to clean (other models have a toilet).  I had the trailer raised a bit on the suspension, added skid plates, and the front shroud changed to a diamond plate truck box.  This last so I can carry an extra battery for the 200 watts of solar panels on the roof to charge and a generator for dry camping in the winter or forest.  I added a backup camera, sawed the business end off of a speed wrench for the stabilizers and chucked that up in a drill.  I’m using a device that lifts one of the tires off the ground to level it side to side when that really matters to me.

The trailer is plenty cozy in the rain and wind.  I am just short enough that without my shoes on I don’t hit my head standing up in the middle.  It feels like a little apartment, not like camping.  Good as a place to work on the computer or read a book.  I didn’t cook as much as I might have, but when I did it was nice to have the control of gas.  The sink is nice for doing dishes, but I’m still hopeful that I can get rid of the plastic taste in the water system.  The refrigerator was mostly home to a supply of tasty water in refillable bottles, a few eggs, a little milk, bread, lunch meat and some condiments.  The A/C was a gift when temperature and humidity were both high.  Of course that really relies on shore power, so that means an RV park.  When I did cook it was often a meal on the road, pulled over at some viewpoint along the way.

Given that I was traveling solo and not too tall, I was able to sleep sideways on the rear couch rather than rely on the table to complete the bed.  With no table set up, the trailer feels quite roomy.  The stock table is very sturdy as it forms the base for much of the bed when folded down.  But the surface is as large as the space between the benches, so it really fills the room.  When folded down it is about the size of a suitcase, but heavy and unwieldy.  So even folded down it takes up a lot of space.  When traveling it sits on the floor without any mount or strap or anything, so it would slide back and forth and vibrate or bounce around during travel on rough roads.  So I left the stock table home and brought a smaller folding table that I could strap down.  Folded flat it doesn’t take up much space.  Now, that said, even it was probably more table than I needed.  So I may be looking for a yet smaller table.  For the times when I need the stock table I have mounted a Velcro strap on the front of the bench to keep it from roaming around too much.  I’m guessing that if you plan to leave the unit configured with the bed laid out during travel that would keep the table in place just fine.  I really wanted a solution where I could get in an lounge around at a moment’s notice.  I didn’t do this often, but that was the plan as I was getting ready for the trip.

Being light as trailers go it was pretty easy to manage when unhooked.  It has solid handles on each corner, and on level pavement and smoother hard ground I was able to adjust its position in a spot by hand.  So this meant I could be less accurate aligning the hitch when hooking up, and one less time starting the car and moving it when unhooking.  But in softer ground the nose wheel will dig in, probably a little more so with the couple hundred extra pounds on the tongue from my changes. That extra weight forward seems to help stabilize the trailer so it bucks front to back less. It is stock 1670 pounds, but add ten gallons of water, the truck box, skid plates, generator, second battery and we’re probably just shy of 2000 pounds, not including my clothes, cooking stuff, food, and other gear.  Well shy of the 3500 pound rating of the rubber torsion box axle, and a third or half less than slightly larger trailers I looked at.  It didn’t take long to get the electric brakes dialed in, and you can definitely tell when they aren’t engaging.  One day I was in too much of a hurry and didn’t do my final walk around, and drove across the campground without the electrical plugged in.  I recognized this because I could sense the difference in stopping even at five miles per hour.

Seeing the curved front edge you might think that it doesn’t catch much wind.  Well it doesn’t catch as much as a flat front would, but it is still like driving with a parachute behind you.  I had serious head winds in a lot of places for hundreds of miles and it meant lower top speeds and worse fuel economy.  But this is the price you pay for being able to stand up without any sort of set up (popping up).  Now, on a really long driving trip I think that you might want to choose the pop up for less wind resistance.  But the day that I left my wallet in the trailer and needed to get it while in line for a toll booth, I was glad that I didn’t have to set it up on the shoulder to get money for the toll.  That said, at 45 miles per hour, or faster with a tail wind, the effect wasn’t so noticeable.  So if you aren’t in a hurry, you are set.

The Jeep was a pretty good tow vehicle, the 5.7 Hemi has plenty of power for most scenarios.  But I didn’t push it too hard on days when there were strong head winds, or steep grades.  Most of the places I decided to drive slower than the speed limit there were trucks doing the same speed or much slower. So in an 80 zone I might drive 70 instead, or more like 60-65 with a 20 mile per hour head wind. The motor has a variable displacement feature, that turns off half the cylinders when the load is light.  Without a load this activates on the flat quite a bit of the time and almost all the time going downhill.  With the trailer, this didn’t happen as much, and if the tow/haul mode is activated it was locked out.  So there were times when I was switching into tow/haul to go up a short hill, and out at the top to coast down.  Mileage really depended on external factors like terrain, wind and road surface.  Average overall on the trip was something close to 13 mpg (which does include a few non-towing days).  But I saw days when it was 9.

I like technology and that requires electrical power, plus I use a CPAP to sleep, so I already had some experience with bring power into the woods.  I have a lithium polymer battery and flexible 62 watt panel I use for boating and hiking.  From that experience I knew that you only charge your battery during the best part of a sunny day when you are planning to spend time around camp.  You aren’t going to leave an expensive panel just laying around, and you need to keep turning it to point at the sun.  I knew I would be driving during most of these days, and away exploring when the trailer was parked.  Having panels on the roof means they will never be as efficient, but they are always deployed, and I don’t have to worry about locking them down against theft.  During the long summer days in Alaska, the batteries never got much of a discharge because the panels were constantly feeding them.  Of course they are less useful in the depth of winter or in the deep forest.  If will be driving a lot, and you don’t end up doing solar, remember that the car’s alternator also charges the system some.  I had Apache Camping in Everett install the solar panels and a second battery before I picked it up from them.

I wanted a second battery for power storage, and at first we just mounted this on the tongue in a plastic battery box.  But then I decided I wanted to carry a small generator too.  This is when I decided to add the diamond plate truck box and put all this stuff inside.  We had hoped to install the generator such that it could run in the box, but things were just too tight in the box with its beveled edges.  In the end, I only ran the generator once as a test.  I never needed it otherwise because I didn’t do the extended dry camping I was expecting.  It contains both batteries, the propane tank and regulator, plus the generator.  This plus electrical cables, water hose, and some assorted tools.  I wanted gas cans to go in the box but there wasn’t space.

I was planning to take my trailer on gravel roads, and as such wanted to avoid damaging the underside with rocks that might kick up.  So I had a couple of skid plates built and installed. I don’t know how much this helped or didn’t, but there are a few scars on the front plate. From the mud I washed off the front of the trailer I’m pretty sure that this saved me from some messy cleaning up underneath as well. But that quarter inch diamond plate is almost like another floor, as it covers better than half of the bottom of the trailer. So likely more than 50 pounds of added weight for this peace of mind.

I also had the axle lowered on the frame, which means the frame and trailer are a couple inches higher off the ground.  This definitely kept the spare from scraping on the ground when getting on and off of small ferries and in step driveways.  The low point ended up being the bottom of the hitch and I think I should have installed air shocks on the Jeep to have fixed this.  Being raised up it helped the trailer look more at home behind the Jeep. I had the folks at Truck Trails in Everett do the under trailer work and box install.

That’s the general stuff, now I should talk about each of the systems in the trailer.