The trip was from June to December of 2015, and I filled this blog with stories and pictures of the trip as internet and time permitted.  Alas in late November the database went missing at the host company, and the backups were all corrupted.  So this is the recreation of about 130 posts, containing about 3,500 images and 110,000 words (mid-length novel) . Check out the Trailer Page, the interactive map of blog posts, and the more detailed Maps Page too. 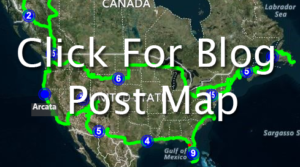 I worked at Microsoft for about 20 years, but one day I got some rather abrupt news that my job had been cut.  Yes for the first hour I was a little shaken, but no worries.  It was easier to say this primarily because as soon as I let the word out my inbox filled up.  Filled up with lots of kind words, some shock and worry, but also with offers to look at new jobs.

There was also a severance package.  Even so, going back before about six months would have meant giving back some of it.  As I thought about it, I decided that my reaction could optimize for time, for money or for adventure.  Optimizing for time meant staying home, extending how long I could stay away from work, playing it safe.  The pitfall was that I might just waste that time.  Optimizing for money meant taking a new job away from Microsoft and effectively getting paid double for those six months.  But the thought kept passing through my head “when do you get time, money and health at the same time?”  So I chose to optimize for adventure and never looked back.

Adventure sounded like Alaska, the only state you can drive to where I hadn’t set foot.  Granted I did most of my traveling in the back of the family station wagon following along in the Rand-McNally atlas.  But I had read a lot of Jack London stories about Alaska, and I used to imagine I was in those stories when I was hiking in the Cascades as a youth one weekend a month in Boy Scouts.  So Alaska was first on the list.

I hadn’t been planning to go on a trip, so I hadn’t done any research, and time was wasting, so mostly I was planning a few days in advance.  There were a few keystones here and there, but mostly not so much.  I hadn’t been as far south as Key West in Florida, so it that was on list, but as I looked at the timing I realized that I should wait for hurricanes to blow over, and see some fall colors up in Maine.  Fall colors were late this year and I arrived early, and I decided Maine wasn’t far enough east.  So I decided to go “all the way” east to Cape Spear in Newfoundland Canada.  So, that’s how it becomes just One Long Drive.

I am a software guy, and I can easily spend a couple of weeks without talking to anyone and not really notice.  That said, I love to tell a story.  If you’ve met me you know, I get sort of excited about telling a story.  But If I had made any other choice in vehicles, I may never have spoken to anyone for the entire six months.  The trailer was different, and the way it matched the Jeep made it all the more attractive.  Comments from “Oh, it is so cute” to “Dude, tell me about the solar panels”.  I gave out about 400 business cards for this blog while I was out.  Now you can get the whole story, and see it through the lens of my camera.

I’ve been getting wonderful feedback about the site.  Thanks for all the encouragement to keep this up!  I am happy that so many folks are enjoying it.