October 14th, 2015 – Mystic, CT – Mystic Seaport, in Connecticut is the largest maritime museum in the world.  It is host to many restored ships and boats as well the re-creation of a 19th century seafaring community.  The public is engaged with ongoing demonstrations of the arts and crafts that were unique to this era.  I spent the better part of a day here while I was in New London. 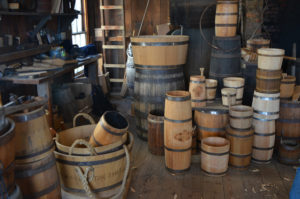 I had been to Mystic Seaport once before.  I believe it was when I was about ten years old.  The cooper’s demonstration is the thing that stuck with me.  I had done some wood working and understood a lot of the problems that they had solved with unique tools.  For example I was familiar with a spokeshave and with vices that you use to round square stock into a round dowel.  Here they were taking this to a new level.  They were making barrel staves that would fit together side by side and form a container that could hold liquid.  I so wanted to try to do this.  If there had been a cooper back home I would have gone down there day after day trying to learn how to do it.  But alas even though I explained the process to anyone who would listen for the next five or six years, I had to find other things to make out of wood.  On my visit I found the cooper shop at Mystic Seaport much the way I remember it.  I’m sure it has changed plenty, but it felt familiar nonetheless. 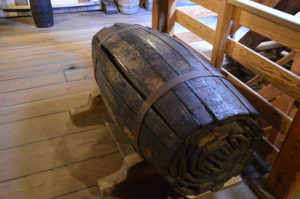 Barrels are interesting.  Because of their shape one man could tip one over and roll it along a floor or dock, then rock it and tip it back up when it arrived where it needs to go.  They are hand made, and even though may have been made from a pattern to a specific size their parts are not interchangeable.  So when you sail with a hold full of barrels, if planned to fill them while at sea (with Whale Oil), you would have a very hard time getting to any but the top barrels.  So they had to be able to be pulled apart.  To this end it was common practice to break down a pair of barrels and wrap the numbered staves into a bundle called a Shook. Much more compact in storage, it only required a cooper to reassemble them on board. 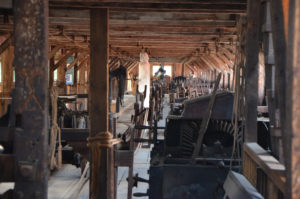 Many of the shops have museum staff there to demonstrate, explain and answer questions.  I took some time to chat with several of these folk, and enjoyed the conversations, each one.  A very interesting exhibit was entitled “The quest for longitude: Ships, Clocks, and Stars” and featured several reproductions of famous clock works that attempted to bring accurate time to ships at sea.  You can pretty easily find your location north and south (Latitude) if you know how high in the sky a given star is supposed to be as it passes overhead, or with tables and the date you can use the sun or moon as well.  But to know how far around the planet you have traveled requires you to know something about the place you want to measure from.  Typically this is the sun based time, back home.  If you can compare this to the sun based time here where you stand, then you can know how far around the globe you have come.  But accuracy is everything, and a ship is both constantly moving, and passing through weather.  To see these you will have to visit yourself, as photography was not allowed here (as in many museums).  I have many times considered building a wooden gear driven clock, so this was quite interesting.  I may yet build a wooden clock. 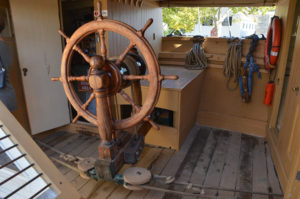 While touring the ships I was quite interested in how they converted the rotation of a ships wheel to the turn of her rudder.  On the Charles Morgan the wheel was mounted directly to the tiller, and rope ran up from one side around a drum on the wheel’s axle, then down to the other side around a pulley to direct it forward thence around another pulley to route it to the wall of the cabin, and back onto the pulley.  Both sides had this pulley arrangement and the crew would have to step over the ropes and the wheel would move right and left as the tiller moved.  On the Joseph Conrad the wheel was fixed in place and a set of metal gears transferred the work under the deck.

The weather was nice but dark rain clouds threatened off to the east.  This made for some dramatic images with purple skies, and crisp shadows.

Note the numbers, used in reassembly

Note the pulleys. This wheel is mounted on the end of the tiller, and turning the wheel operates ropes that pull it left or right

A pair of broken down barrels. On a whaling ship the barrels need to be out of the way until filled with oil.