Home / North To Alaska / Around Fairbanks 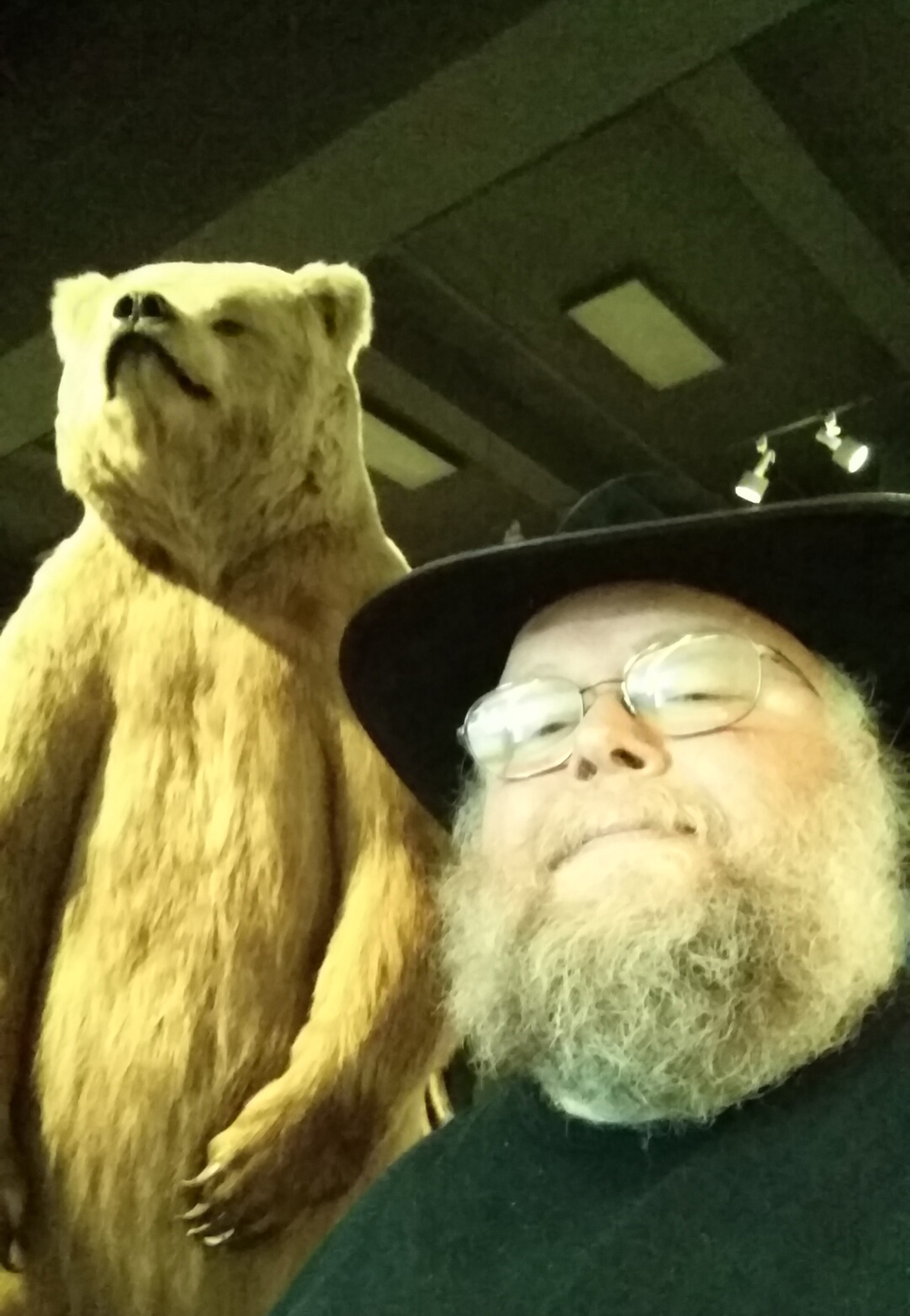 June 30 – July 10 – Fairbanks, AK – The grand hospitality of my high school friend Duncan and his wife Reanne made this stop in Fairbanks a highlight of exploration and unwinding.  A highlight was the laid back fourth of July celebration and getting caught up on decades of time passed. Having a friendly and safe place to park the trailer made it possible to take day trips north on the Dalton Highway, and on the train into Denali National Park.  I had time to get the sensor on my Nikon cleaned, so no more spots on my pictures, I tasted the cuisine, wandered the museums, and saw a couple of first run movies.  It didn’t hurt to have a place to do laundry or take a shower either.  They were just back from an epic tour and we certainly connected on that level as well.  So, to start, a big thanks to Duncan and Reanne.

The day trip on the Dalton Highway, and the Train into Denali will be the subject of their very own posts, and dinner at the Pump House will be yet another.  In this post I’ll talk about the rest of the Fairbanks experience. 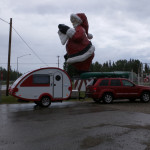 I felt obliged to check out the town of “North Pole“.  On one side of the freeway I stopped the small visitor’s center and said hello.  On the other side of the freeway is “Santa Claus House” where I took a photo of the very large Santa Claus, but declined to go inside.  Shopping not really my kind of thing, especially decorations.  Might also be that 20% Grinch, 20% Ebenezer lurking deep in my psyche. 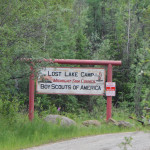 Now Duncan had mentioned that the local scout camp was on a lake that I would pass as I came towards Fairbanks. He also mentioned that he had a cabin on that same lake.  I thought I should see if I could find the lake, but really didn’t have much to go on.  But that is the fun of exploring.  So, I started looking for a spot to pull over where there might be some cell service, so I could do a little research.  I pulled over at a large turnout alongside a big lake.  I looked up the camp and found “Lost Lake Camp” listed on the local council’s web site.  I read the directions and then popped open a map to see how far it was away.  So, let’s see “Birch Lake”, milepost 306.  I looked in my rearview mirror and saw that there was a milepost, but I was looking at the back of it.  So I backed up (remember I have a trailer in tow) and, hmmm, milepost 306.  I looked at the map more closely and the lake I was sitting by was Birch Lake.  So by whatever coincidence in todays hundred mile day I had pulled over about a hundred yards before the left turn I needed to make. 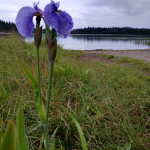 So I headed over to the camp and took a picture of their sign.  I stopped at the public boat ramp and marveled at the irises growing wild in the tall grass at the edge of the lake.  Also here at the boat ramp was a signboard with boating and other information and a rack with various sizes of personal floatation devices for folks to borrow.  I saw this many places in Alaska.  I do hope that helps keep some folks safe on the water.  I didn’t really have a clue where to look for Duncan’s cabin, and I had the trailer in tow, so I didn’t wander too far.  As it turns out I was a stone’s throw away. 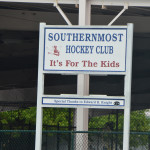 I met up with Duncan and his wife Reanne in Fairbanks, it felt good to reconnect after almost forty years, and meet Reanne for the first time.  It seemed that life had been good to us all, and we were celebrating it.  The place in the driveway was perfect, the time spent sharing stories about family and adventures was great.  Not to mention making many new friends, all of whom, young and old, ladies and gentlemen, seemed to play hockey… 🙂  Oh, and if your hockey teams are the furthest north… when I was in Key West I was wandering the back streets and found a building with a sign on it “Farthest South Hockey Team“.  Just wondering if you all are aware of one another, maybe you should work out some kind of exhibition/exchange event?

Pioneer Park is a city park opened in 1967 as part of the Alaska Centennial celebration.  Great place for a picnic, plenty of history to take in.  Many older buildings were moved here for preservation.  There are a couple of food concessions, gift shops and such, and several independent museums.  There is no admission fee for the park as a whole, but some small fees for some of the museums or their programs.  I took some time to soak up a bit more history here at the “Big Stampede” mural presentation. 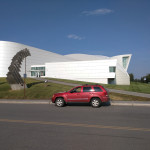 The “Museum of the North” on the University of Alaska Fairbanks campus is worth a visit.  I took in a couple of shows one of which gave me a lot more insight into the Aurora phenomenon.  While I knew that the colors were from electrons dropping from one quantum state to another I didn’t know that the northern and southern lights were the same thing.  Not just the same *kind* of thing, but literally mirror images in real time.

At the entrance to one of the museum’s exhibit halls you are greeted by an 8 foot 9 inch brown bear named “Otto”.  I submitted my photo to the museum’s exhibit.  They said they were making a large mosaic of the photos in a bear shape to explain about other hibernating animals. 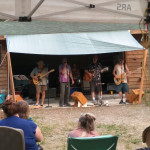 For the Fourth of July Independence day celebration I joined Duncan, family and friends back out at Lost Lake at his cabin.  We had an Interesting easy food recipe they call “walking tacos”.  It is based on the lunch size bags of Doritos corn chips.  Take a bag, and crunch up the chips.  Now open one side or end.  There is much debate on the best/right way to do this, personally I prefer to make a slit on the side and avoid dividing the packaging into more than one piece which makes chasing trash twice as hard.  Now that the bag is open, spoon in your choice of taco fillings.  Mix as desired and eat.  Apparently something they learned on the road in their own epic adventure.  We joined the local community in a small gathering near the lake with music by the “Skid Marks” who also live in the area.  When I finally headed back to town it was between one and two AM, but it was still light enough to wander in the forest without a flashlight, and the sky looked like a sunset.

I was able to do some research into other adventures in my down time, and booked the train trip to Denali.  I decided against the flights to the arctic ocean and to see bears up close on the basis of cost.  Those are things I will leave for another day.  But in between all that research and the other explorations I also took in a couple of movies, Jurassic World and Terminator Genisys.  Was nice to just relax and do whatever came to mind.

Of course there were a few errands that really required a bigger city’s resources, and I took care of these as well.  I dropped by Sears and bought a 3/8″ ratcheting socket handle, and a breaker bar to round out my traveling toolset.  One impression I took away from the visit about local roads.  There are a lot of expressway type roads with frontage roads accessible at intersections.  Both the GPS and the mapping software on my phone had trouble with this sort of arrangement, but once I got used to the roads it was pretty easy to figure out what to do to double back after you had passed.

I had noticed a lot of spots on my camera recently and after cleaning the things I was comfortable working on I decided I needed the help of a professional.  In the listings I found “Alaskan Photographic Repair Services” and decided I’d give them a shot.  Great choice.  It is a small shop on the upper floor in a small downtown row of shops.  The gentleman seemed a step ahead of me as I told my story, he confidently checked the camera and assessed the issue.  Turns out the mirror had oil splashed on it.  Sticky mess.  He had time to get to it that night so I left it and picked it up the next day.  Reasonable price, great service. Problem resolved.  Looking back I think this probably occurred on the first day of the trip.  I had the camera in its case as I was getting into the car, and dropped it nose first from about two feet up on the pavement.  The case is really well padded and it bounced back up almost as high as I dropped it and I caught it.  The camera appeared to be fine, but when using longer focal lengths, higher F-stops and longer exposures the spots were progressively more obvious.  He was able to show me images taken against an evenly lit white plastic surface from before and after.  So from here on out, much less retouching required on pics.

Wild? Iris growing at the edge of the lake. There were quite a few, scattered along the shore, and not just at this lake.

University of Alaska Fairbanks – Museum of the north

Me and Otto the bear

About the brown bear

Apparently the museum was crowd sourcing images to create a bear shaped mural?

Must be something to see there.

From Key West… maybe an opportunity for an exhibition game?

North End of the Alaska Highway
Next