Home / North To Alaska / Around Anchorage 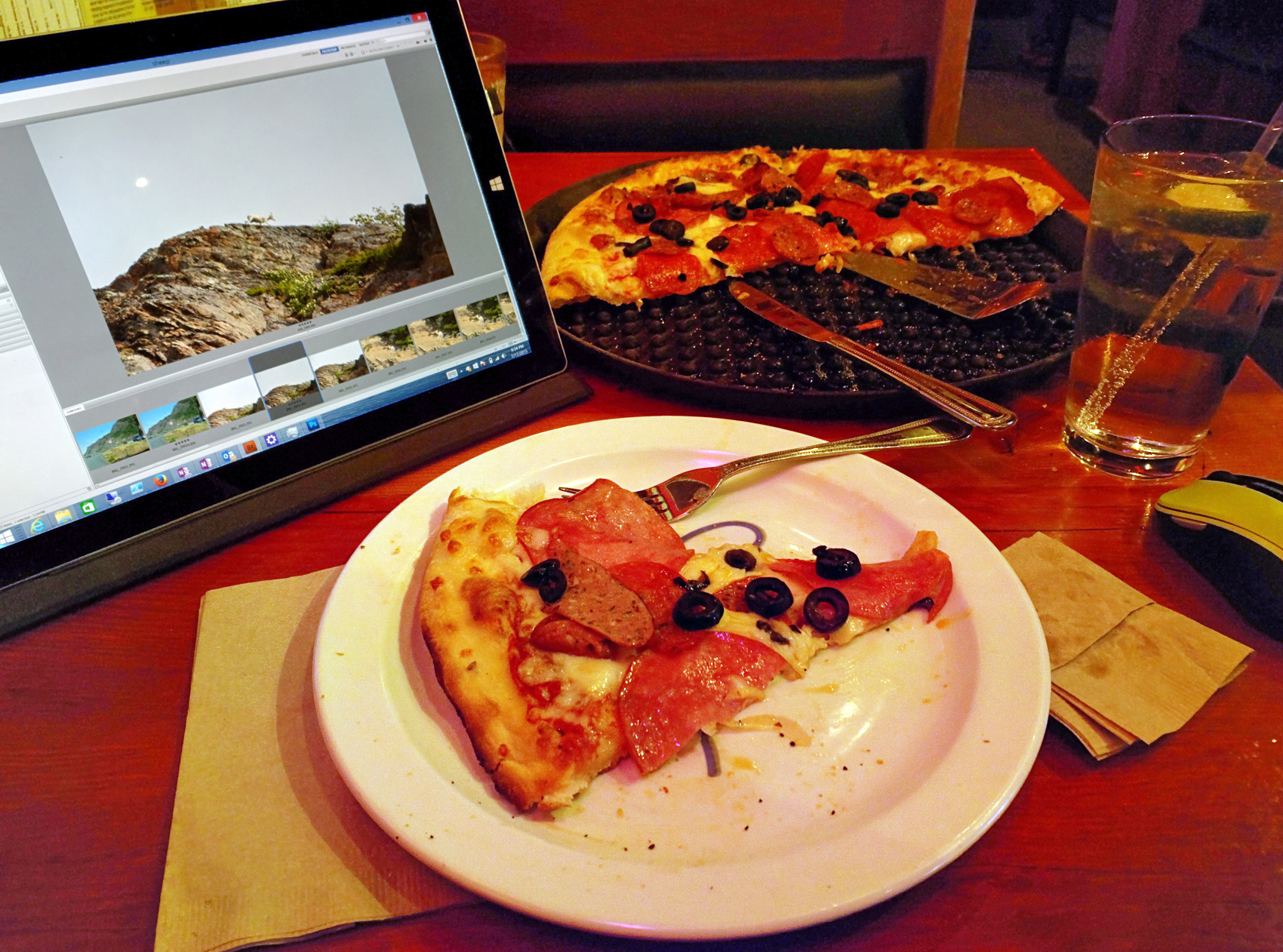 July 12-23, 2015 – Anchorage Alaska – A side trip to a trailhead above Anchorage, and to Earthquake Park.  Sampling food around town while I took care of some errands, including a couple of visits to Moose’s Tooth for great pizza.  I spent several days in Anchorage and passed back through a couple of times during my adventures in this part of the state.

The main road through Anchorage had the most amazing ruts in the asphalt pavement.  Each lane has two ruts where the pavement has been eroded under countless studded tires.  While this is noticeable enough driving along the highway, it is most notable when crossing the road at an intersection.  Crossing the eight lanes of the main highway at an intersecting parallel road is like driving over 16 closely spaced speed bumps.  This means that everyone drives ten miles per hour across the intersection rather than thirty-five.  Which in turn means that traffic backs up at each intersection because only about half as many cars as you might expect can pass through on each cycle of the light.  Either that or the car next to you starts shifting sideways in their lane and potentially into yours.  Apparently a professor at the local university has a potential solution, the video has a few clips that illustrate the ruts pretty well. 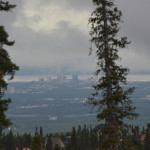 I was considering visiting the Alaska Zoo, but timing wasn’t really right when I was in the area.  So I ended up wandering up on the hill above southern Anchorage to the Upper Huffman Trailhead.  I was hoping maybe this could be a kind of place where I could sneak an overnight, but it turned out not so much.  A great view from above Anchorage, and as usual I started up conversations with a few folks in the parking lot about the trailer. 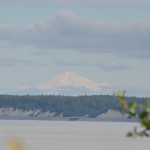 I stayed for a night at an RV park in the midst of Anchorage, Creekwood Inn and RV park, and the next day took a side trip out to Earthquake Park.  It was a very nice day and I got a great view of Mount Denali.  Many flowers in bloom and the level paved paths in the forest were dappled with sun.

Early in my visit to Anchorage I met up with a friend for a nice lunch at The Rock Wood Fired Kitchen, made even better by great conversation.  Sam and I are both adult Boy Scouts leaders, in particular we are advisors in the Order of the Arrow.  Our section is comprised of lodges from Western Washington and Alaska, a big and diverse territory.  Since this was my first trip to Alaska, we had only ever met up at events in Washington, so I made a point of us meeting up in his home town for once. 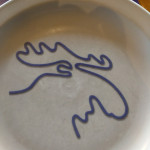 Everywhere I went pulling the trailer I ended up chatting with people, and when I talked to locals I often asked about where to eat, and if they seemed like they were into pizza I would ask about that.  One place kept getting a rave recommendation, it was Moose’s Tooth Pub and Pizzeria.  The other thing everyone said about it “Be prepared to wait for a table”, and I can confirm that yes, you will likely wait and that it is worth the wait.  I ended up stopping here three times and will go back whenever I’m in the area.  Good service, clean and busy atmosphere, but not overly pretentious.  This is a well balanced medium crust pizza.  Sauce followed by cheese and ingredients on top.  Nothing in excess, but not sparse.  Lots of well considered non-traditional combinations.  I expect that if you like beer you’ll like the place even more, but they know what soda water is, and that made me happy.  They also have WiFi, but when it is busy the network is really slow, and it is always pretty busy.  I did however manage to do a little blogging here one afternoon.  If you are good for takeout, that is an easy way to avoid some of the waiting.

At this point in the trip I was still very focused on being online to backup my photos and write blog posts.  So I spent a lot of time looking for likely places to hunt for strong and fast WiFi, and doing this at hours when I wasn’t sharing those connections with other people.  So I wandered around Anchorage a lot, and gave my business to places that had WiFi. 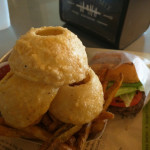 Several times I ended up at the “Mall at Sears“.  I came here first to visit Sears for a random tool.  While hanging out using their WiFi in the mall I saw a lady come out of BurgerFi with something on her plate that I couldn’t identify at a distance.  It was only after I decided to get food there that I realized these were huge onion rings.  Pretty good, definitely worth experiencing once. 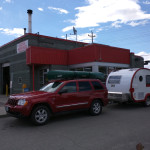 One of my errands was getting the oil changed in the Jeep.  The folks at light speed lube were friendly and professional, and as usual we talked about the trailer and my trip.  I asked if they could recommend a place within walking distance where I could get lunch and they pointed me to the Firetap Alehouse, just across the parking lot.  The manager at the lube shop had recently tried the blackened halibut wrap and was quite impressed, so he recommended it.  They worked on the Jeep while I ate lunch, and pulled the Jeep and trailer around and parked it along side the building until I got back. 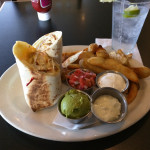 Lunch at Firetap was very good.  This is another place for beer lovers, but they certainly know what soda water is, and how to keep it full.  The service was exceptional.  Their menu is quite diverse and the Blackened Halibut Wrap was indeed an impressive and tasty change of pace.   Described as “Blackened Alaskan halibut  fillet, with oven roasted peppers, onions, mozzarella & cheddar cheeses in a warm flour tortilla.”  They serve it with four sides: sour cream, pico de gallo, guacamole and tartar sauce, and fries.  You won’t be hungry, and it didn’t have any kind of unpleasant fishy taste.

At one outdoor mall a security person came by the trailer and formally asked me to leave.  It was about 11pm and the sun was just going down.  All the window shades were open save the one behind me on the driver’s side, because the low sun was causing glare.  When the uploads were done I was planning to head out of town to the north and find a place to pull over along the road. 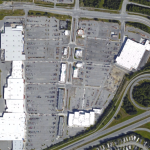 Also important to the story is that that this is a large, modern mall. Almost a half mile end to end, with a parking lot capacity of at least 3000 cars.  And, there’s another lot just like it on the other side of a row of stores.  Looking at the satellite view where the lot is less than a quarter full there are a couple of large trailers unhooked and left sideways across several parking spots, a couple of large trucks or RVs and a half dozen vehicles with trailers.  Keep that picture in mind… 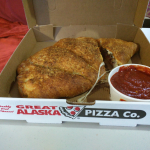 The Great Alaska Pizza Company store where I had picked up dinner was just closed and the employees had headed home.  I was eating pizza in the trailer parked in the now nearly empty lot.  I had sorted several network and software issues, and was poking at slow loading web sites to check on bills while the uploading process proceeded.  That’s when I heard a scratching noise on the wall right behind me.

Startled, I jumped.  Then I quietly turned and listened, and it happened again.  I got up and turned around, opened the shade, bent down and looked out to see a young man in a uniform trying to slide a piece of paper under the edge of the window.  I said hello and that startled him.  The glare from the sunset on the window probably hid the fact that the shade was now open.  He stammered and said he couldn’t find the door of the trailer.  I told him to come around the other side.  I popped the door open and waited for him to come around, wondering who would not have thought to look on the other side of the trailer for the door.  When he came around he nervously handed me the paper and said shakily “ah, um, this is for you…”

I took the paper and saw it was a ticket-like printed form of some kind, narrow and clearly a carbonless copy from a little book that he was holding.  As I was looking at it he said “you can’t park a trailer in this parking lot”.  I figured he meant “you can’t park any vehicle in this lot when the stores are closed” which I had expected.  So I explained that I was finishing my pizza and using the network to check my bills and would be gone in just a little bit.  But he sort of leaned into his statement and said “no, trailers just aren’t allowed in this mall at all, its only for cars.”  All I could think was um… what?

I was already pretty on edge from troubleshooting, endless waiting, and slowly loading pages, not to mention long day of driving and navigating.  So this odd statement put me into a probing question mode. Not loud or mean, but cold and clearly heading somewhere.  Prickly.

Of course that just took this young kid from “kind of nervous” to “really scared looking”.  I soon recognized that while this might make me feel good, it wasn’t going to help in the long run.  So I backed off a little and changed my approach.  I subtly changed the questions to ask about his day, how long he had been on this job and other things that were easy for him to answer.  Then I started weaving my story.  I told him about the blog, and about my trip and got him interested, smiling and laughing. So now that I knew what he *needed* to have happen, I could propose a solution that worked for both of us.  As long as I wasn’t here when his route brought him by again several hours later he didn’t much care what I did.  And yes, I left and spent the night out north along the highway.

View from Upper Huffman Trailhead out over the south part of Anchorage.

Magpie near the parking lot

These guys changed the oil and recommended a great place for lunch. (Light speed lube)

Grilled Halibut wrap at Firetap grill. Recommended by the guys at the oil change place nearby.

Sun through the forest at Earthquake park.

Moose’s Tooth, be ready to wait for a table.

This is how blogging should be done. – At Moose’s Tooth.

Not actually Pizza, this is a Calzone from Great Alaska Pizza Company, it was very good, and really cheap.

Not a little mall. I was parked in a spot that was just left of the middle of this image.