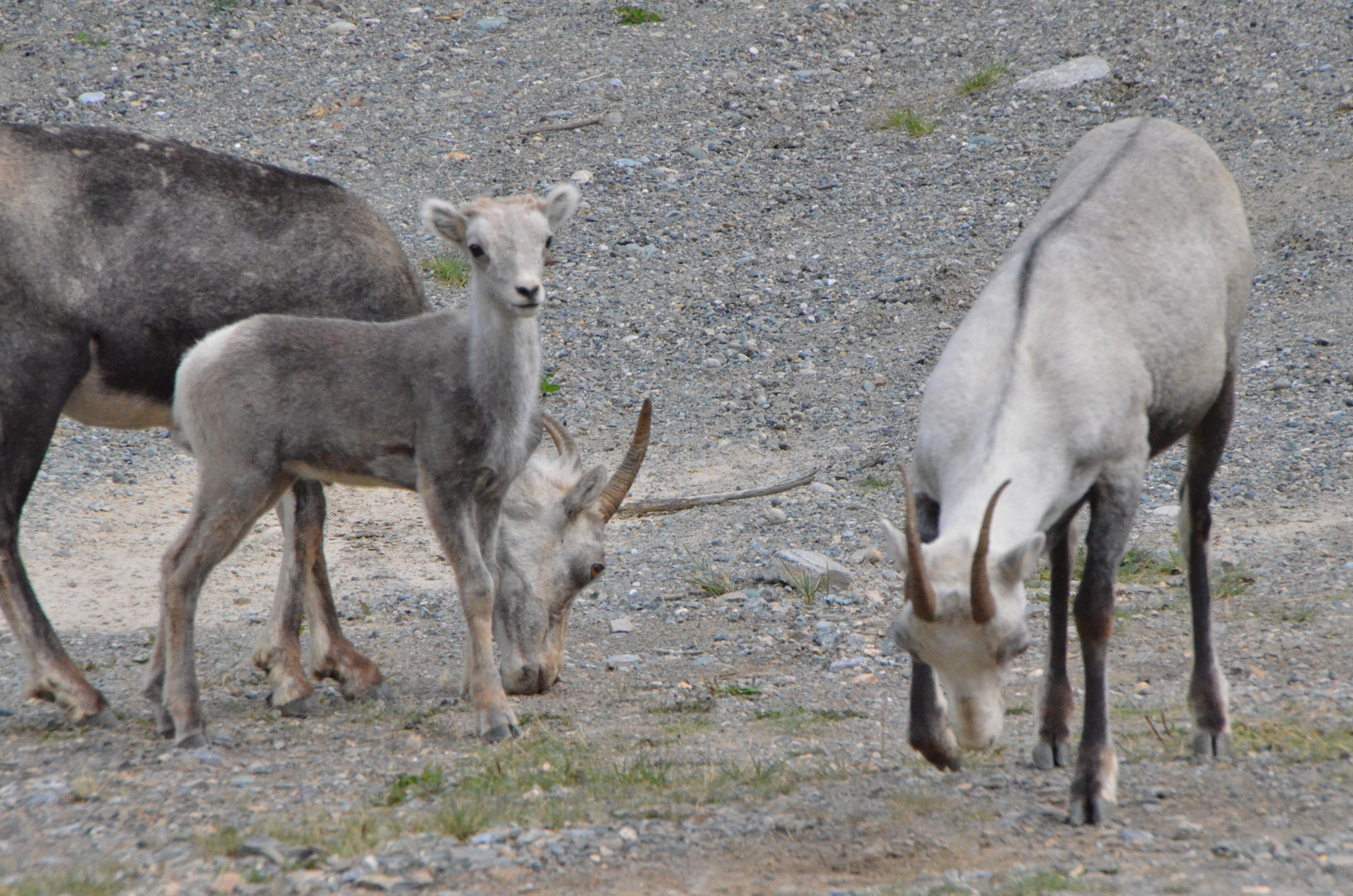 August 1st, 2015 – Cassiar Highway, BC – The road less traveled, this alternate is shorter, but not as fast, straight or smooth.  I spotted rabbits, Stone Sheep, Coyotes and black bears.  This route provided access to Boya Lake for a nice paddle, and Stewart/Hyder for Glaciers and more bears.

The travel down the Cassiar highway from Watson Lake to Prince George was several days, starting on the 1st.  I spent nights in Boya Lake, Stewart and Prince George.  Road construction was underway and had progressed to a point where I was treated to long sections of fresh blacktop in my lane.  The road was much slower going in the North, and lane/fog line markings were worn or missing on long sections there.  Speeds increased and road conditions improved as I traveled south.

Early on the trip I spotted a group of Stone Sheep licking minerals in a gravel lot along the road.  They are a southern variant of the Dall Sheep I had seen in Alaska. Slate gray by comparison with the bright white of the Dall sheep, they blend in to rocks very nicely.

I didn’t realize just how valuable the lane markings are until I had driven without them for a couple of days and then had them back.  Gravel roads have their own “markings” that show the path that others have taken, and warn of obstacles, but a crowned chipseal road is almost a blank slate by comparison.  I found that the road felt much narrower, made more notable by the need to keep corrections smooth while pulling the trailer.  When I got back to the lane markings I would guess that my overall speed was easily 10 mph higher with the same level of comfort.  Then at that same level of comfort I was able to notice much more alongside the road.

In the northern part of the trip the road passes through some recovering burn areas.  The grass is bright green under the silvery sticks of the former forest.  The openness let the sky show through, and I could see more of the terrain rather than just the first line of trees.  I saw several brown snowshoe rabbits with their long wide back feet hopping about in the undergrowth.  Too fast for a camera.

In one dip near a small lake I spotted a shadowy figure sneak across the road ahead.  As I approached it slipped into the brush on the left side.  I slowed as I passed by, looked into the brush, but couldn’t see anything.  I stopped just a bit further along where the visibility both directions was sufficient to avoid traffic complications and watched in my rear view mirror.  After a few minutes the figure reappeared on the road further down.  I got out of the car and took a couple of photos before it disappeared again.  At the time I thought it was a wolf by the way it carried itself and its size, but from the photos I think its ears give it away as a large coyote.

In the north the road winds through mountains

These are females and this year’s young

They are licking minerals.

Some light rains passed through

Large Coyote (thought it may have been a wolf)

Happy to find that they were paving the southbound lanes first.