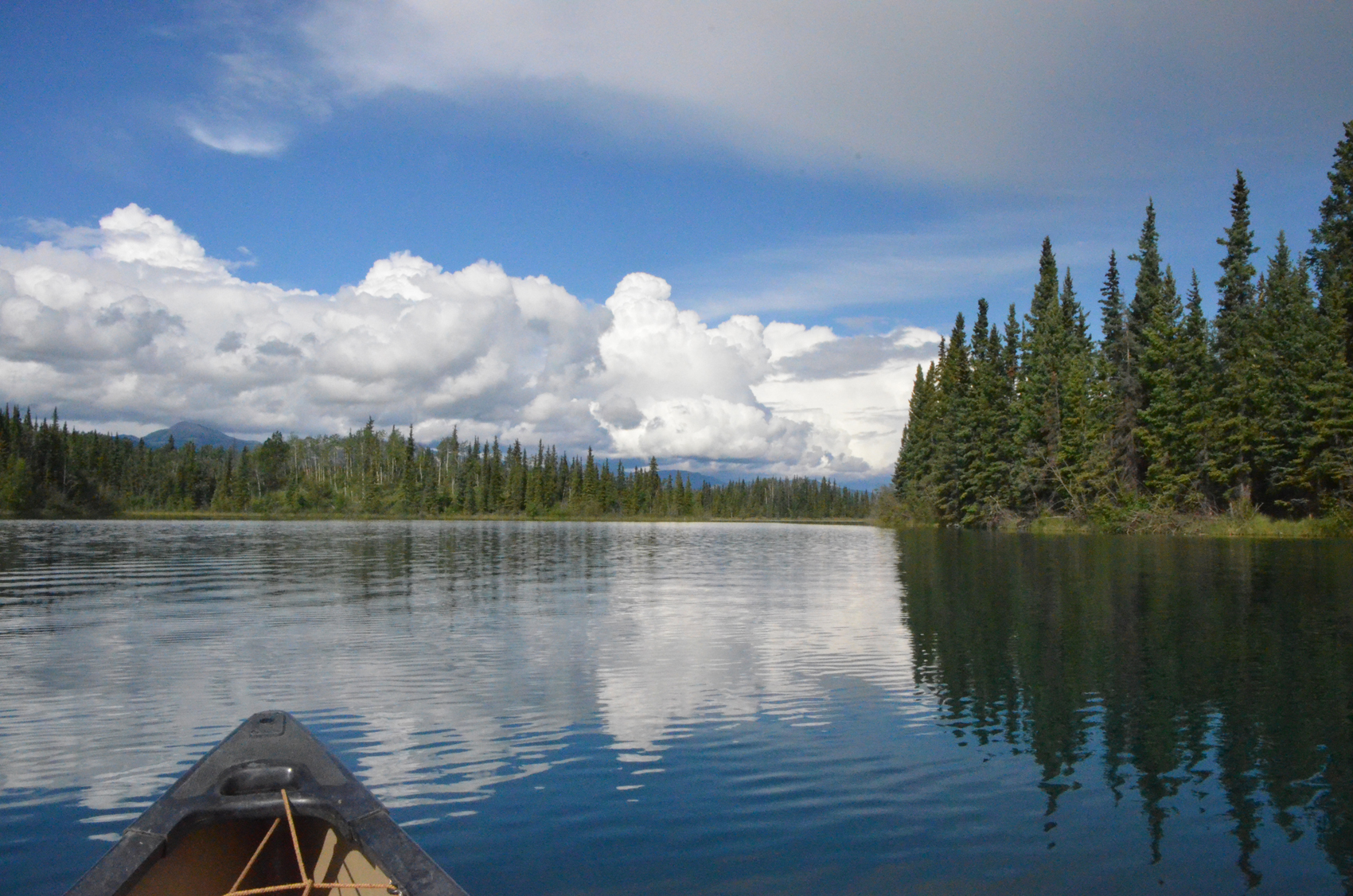 August 2nd, 2015 – Boya Lake, BC – The white marl bottom gives the impression of a swimming pool, while the interlocking depressions that form the lake provide plenty of shoreline to explore.  Beaver dams and lodges, a variety of birds, flowers and trees.  Against a backdrop of varied dramatic weather.

I had arrived at Boya Lake in late afternoon the day before.  I drove through the loop once then parked and walked a few sites before choosing one.  The site had been recently graded and graveled, and the whole campground was very well maintained.  I talked with the caretaker as he came around to collect the small camping fee and mentioned that I’d like to get some boating in the next day but was concerned about being out by checkout.  He assured me that a couple of hours wouldn’t be an issue, so I relaxed and planned to get on the lake the next morning.  As usual I talked with a few folks as I walked around the campground.  A couple next door, and some folks biking their way down the highway, here from Switzerland.

The next day I spent several hours paddling around the lake exploring the nooks and crannies.  The bottom of the lake here is covered with a white mud or “marl” that makes it very easy to see the details on the bottom or fish and the like in the water.  It gives shallow spots a look akin to a swimming pool.  The lake is made up of many smaller depressions, so it is not just an oval shape, but rather many interlocking oval shapes.  Where these intersect the bottom rises and in two places Beavers had built dams.

One of these dams was about four or five feet tall and I could hear water trickling down as it crested the top.  There is a trail that comes out to this dam, and I met my next door neighbors here.  They on the trail, and I in my canoe.  I wasn’t able to see over the dam, but they told me the water was right up to the top on the other side.  The dam was wide and tall, and very solid.  The sticks were clearly a structural component but rocks and mud were doing the work of holding back a lot of water.

Just around the corner from here was a huge mound of sticks and mud, clearly the beaver lodge.  It was about six or seven feet high in the middle and more than twice that in width where it met the water.

Further out, and through several smaller parts of the lake I came to a shallow beginning of a dam.  About eight inches high the water here was lower on the other side so I could look over the dam from behind it.  All along the banks I found evidence that the beavers were felling trees into the lake for transport to the work site.  Some recently felled trees were in place where they fell.  I’m guessing that if I had come at a different time of day I would have seen work in progress.

There were several loons on the lake.  At least one pair that I observed for a while and eventually got close to.  As diving birds they don’t fly away when you approach, and so a little drifting allowed me to get some good shots.  The trick was to approach from a side where the lighting was good.  Their calls were the main sound to be heard on the lake which was otherwise quite still.

In a more open part of the lake I heard some young birds high in a tree.  As I approached an adult red tailed hawk flew up out of the tree and made quite a show of noise and flapping to land on the very tip of a tree several hundred feet away and continued to make a fuss trying to draw my attention away from the nest.

I drifted for a bit and the wind was pushing me towards shore, so the bird was getting more upset.  Finally I felt I was getting too close so I put the camera away and paddled off.  The show continued until I was quite a distance away.  From a distance I happened to see a second, slightly larger red tail a bit of a distance the other direction from the nest as it flew off over the forest.  I assume the smaller nosier was the male guarding the nest and the larger the female heading off looking for food.

I had spotted several King Fishers on the paddle, but late in the trip I got a good opportunity to drift close and get a good picture or two.

At one of the narrow junctures of the small depressions of the lake the water was particularly shallow.  Here I was able to see an underwater streambed where the water must pass when the lake is less full.

The weather was quite varied on the trip and I watched several small squalls pass by.  This made for some very dramatic skies.  Back at the shore I packed up and got back on the road heading south, short drive to Sawmill Point tonight.  Short travel is the price you pay for mixing in recreation in the same day.  But I wanted to keep moving south, I am starting to think I have a lot more places to go.

The scenery changed by the minute under varied skies.

Mountains, forest and a Loon.

Drifting in the canoe with the camera poised, scanning for where the loon would surface next.

Getting a good light angle wasn’t a given with the loon popping up here and there.

White marl bottom made the shallows look like a swimming pool

And you could see the bottom features clearly.

Sometimes rocks were the order of the day.

This beaver lodge is about six or seven feet at the center.

Beaver dam is about four or five feet tall. Water is right up to and trickling over the top of the dam.

An island in the lake

Another beaver dam, smaller and newer, it seemed to be under construction.

This time I am on the higher water here.

Rough water above, and still below.

Recently felled tree along the bank

Flowers along the shore

A pair of felled trees

This hawk was drawing my attention away from the nearby nest.

The youngsters were making a lot of noise but this guy was making even more of a fuss.

Note the white cut in the bottom, it appears that flowing water has cleaned out a path.

Several squalls passed by in the distance.

This one came closest to getting me wet.

Behind me is broken blue sky.