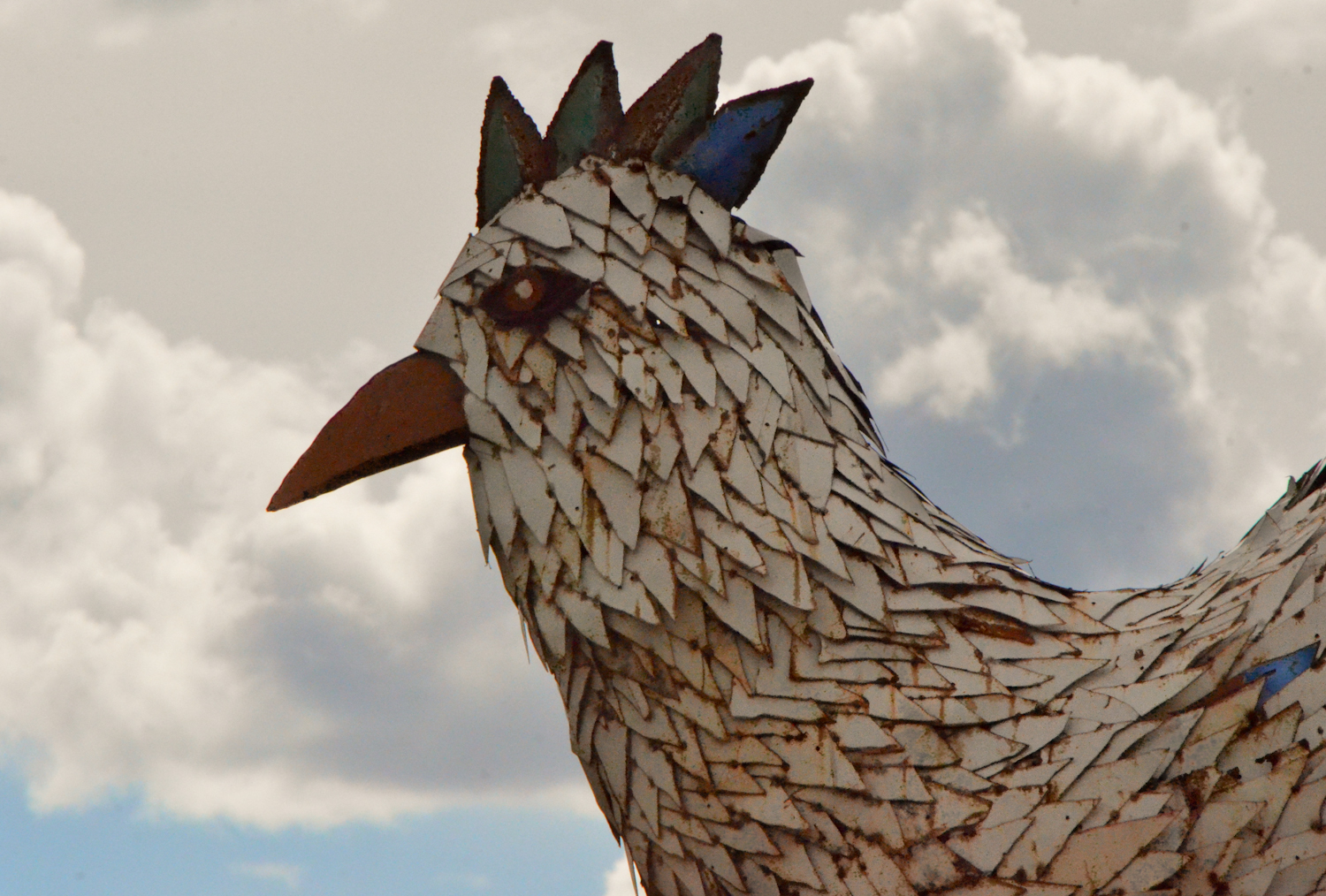 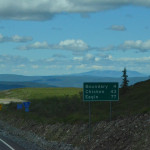 June 28, 2015 – Yukon/Alaska Border to Chicken Alaska – The crossing into Alaska was simple and the officer was quite pleasant.  Smooth fresh asphalt for the next ten miles along the rest of the ridge road, then gravel as the road winds down alongside the river.  I saw several antique cars in the mix of oncoming traffic. Arrived in Chicken late in the day.  Campy gifts with chickens and chicken jokes, check, giant metal chicken, check.

The Canadian section came to an end with the border station.  The station appeared to have been recently rebuilt with plenty of high tech, and pavement was smooth dark asphalt.  The officer was quite pleasant, and she was interested in the trailer.  I pointed her at the blog, hoping this new tech would include an internet connection. 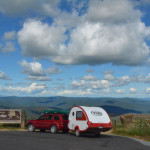 After sixty odd miles of freshly graded gravel, as nice as that was, the dark new asphalt was shockingly smooth.  I knew it was a small isolated stretch, so I was again torn between driving quickly and enjoying the traction and subtle flexing of sidewalls, versus driving slow and enjoying the smooth easy drive and scenery.  I chose slow.

Shortly along from the station is a small rest area pull out.  Here you will find the “Welcome to Alaska” sign and one describing the fortymile river area.  A small deck provides a great view of the valley below and off to the horizon.  Puffy clouds were the order of the day.  The meadowy slope rises up to a small knob as it passes to your right.  This is the opposite side of the ridge from where the road had passed as you drove here. 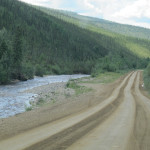 The road follows along ridges for a few more miles.  It turns to gravel again as it comes off the ridge to follow a river downstream.  The road surface was pretty smooth and had been worn by equal traffic coming and going into a triple track.  Cars going each direction share the center track for their left wheels and the right track on their side.  When oncoming traffic appears both move to the outer edge of the center track with the middle of this area serving as the center line.  Getting into the loose gravel suggests slowing a bit, and doing so avoids running head on into flung gravel as well.  Saves on paint and glass damage. 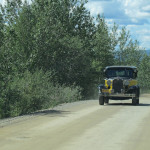 I believe there may have been an antique car event in Eagle, as I saw several old cars in the oncoming traffic after I passed that turn off.  A long rough road to get there, so it was a little surprising.  After a few had passed I prepared my camera and planned to stop if I saw others and take pictures.  I was rewarded a bit later as a group of four such cars came along.

Chicken itself is a mining town, with tourism based on the unique name. The story is that they planned to name the town for the abundant Ptarmigans in the area but settled on Chicken when they couldn’t agree on the correct spelling.  It is small and remote, with no public services.  So the only power here is what they generate, and no cell service.  I didn’t realize that the Gold camp offered internet until reading their web site later.

I enjoyed my stay at the RV park at Town of Chicken, but would probably have been similarly pleased with either of the others.  From the web sites of these businesses you would easily believe they were the single business in the area.  It took some effort to learn that this wasn’t so, and this left an unfortunate bit of a bad taste.  There are most definitely three (that I encountered), or shall I say three “centers”, as it seems there may be several small businesses within each of these. I reserved a spot via the web because I didn’t know how limited the sites would be.  I shouldn’t have worried, this was nothing like Dawson City, there were plenty of spots at all three places.  It might get busy when they have a festival or such, but it seems plenty of capacity otherwise. 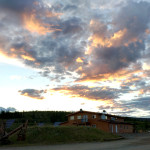 Right along the road (traveling from the Yukon/Alaska border) is “Town of Chicken“.  This area appears to be pretty new by the look of the buildings.  From their web site it feels like there may be several separate businesses here.  I had a nice burger and onion rings here.  Although I’m a little less interested in tempura batter. 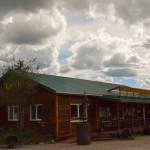 “Chicken Gold Camp and Outpost” is where you will find the big metal chicken and the Pedro Dredge among other attractions.  This is off the main road a short bit, these folks seem to be the most confident in their place in the scheme of things, they actually acknowledge there are other gas stations and restaurants in the area.  It appears they also sponsor a music festival in June (Chickenstock).  I went inside and took a look around.  I think this is where I would stay on a second visit. 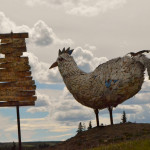 Worth a mention, the metal chicken sculpture was created in Homer by shop teacher Mr Bregge, and his class, and brought here for Chickenstock 2011.  That’s a 600 mile journey.  Here are some pictures of “Mr Eggee’s” construction and of the Chicken Sign Post from the Gold Camp’s Facebook page.

“Downtown Chicken” is a group of older buildings with rustic late 1800’s town feel on the outside.  I only went into the gift shop looking for interesting pint glasses for my son, but they have a bar and restaurant that I didn’t visit.  Oh, I never really found a suitable pint glass.  They were all either business specific or silly cartoonish things.

So, worth a quick visit along your way, get a photo of the metal chicken for sure.

Just after the Alaska border station, rest area ahead.

Looking north over the fortymile valley.

Panning to the east the valley floor rises to our level

Panning further and upward we look up the ridge that had blocked our view as we approached.

Isolated bit of smooth new asphalt in the middle of a wilderness.

Winding down the valley

I’m thinking there must have been an event in Eagle.

“Town of Chicken” aka “Goldpanner RV park”, not to be confused with either “Down*town*” Chicken” or “Chicken *Gold Camp* and Outpost” – but in fact quite confusing, hopefully not intentionally so.

Suspension foot bridge over the river.

I think this was the “40 mile steakhouse” – not the white table cloth, but counter service with indoor picnic tables and lawn chairs. Good food, but again with the pretentious naming.

Almost looks like it is getting ready for a takeoff

Top of the World Highway
Next

North End of the Alaska Highway