Home / North To Alaska / Top of the World Highway

Top of the World Highway

Top of the World HighwayFebruary 22, 2016 FrankLoWa
North To Alaska
0 Comment 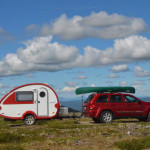 June 28, 2015 – Dawson City to Alaska Border – First order of business cross the Yukon, then up into the alpine meadows and along the ridges to the Alaska border.  This is the “Top of the World Highway” with sweeping views of wilderness in every direction.  Foxes and a grouse were sighted early in the day and dramatic skies were everywhere you looked.  The dirt road had been recently graded and was in excellent condition, still damp from yesterday’s storms there was very little dust and not enough mud to be kicked up by the tires.  If I hadn’t made a reservation further down the road I would have liked to have stayed here a couple of nights dry camping.  I would definitely drive this again, and plan to stay. 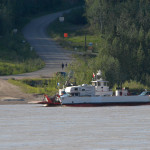 The Klondike loop connects to the Alaska highway at Whitehorse in the south and near Tok in the north.  This stage is between Dawson City and the Alaska border.  There is no bridge over the Yukon here, so the territorial government has provided a small ferry.  The ferry “George Black” is provided at no charge to travelers and is a key link in the loop.

The literature warned that wait times could be quite long when it was in high demand.  I decided I wanted to be on the road early both to avoid this and to take advantage of the early morning clear skies.  I can see how it would be easy for traffic to back up here, but I didn’t have to wait at all. On board as a driver you are asked to stay in your vehicle, so getting pictures was pretty much “out the windows”.  But I asked a deck hand to take a couple of shots and he was happy to do so.

The ferry’s loading ramp lowers directly onto the river bank, so the angle varies depending on river levels.  I didn’t have any trouble getting on board, but on the other side they had me take it slow.  The bottom of the hitch barely scrapped the pavement, and the back of the trailer was clear without any issues.  So I’ve arrived in West Dawson, and stopped to get a picture looking back. 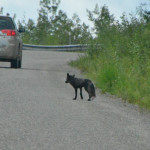 The road climbs quickly away from the river, and after a switchback or two I turned a corner to see a car stopped ahead and something in the road behind it.  As I came to a stop I saw that I was looking at a darkly colored fox.  This fox crossed the road slowly, looking back several times, and then another dark but more brown colored fox came trotting quickly across.  I’m guessing the first was a parent, the second an older child.  I was lucky to have a camera handy, but all the pictures were long shots through the windshield.  They were there and gone in a flash. 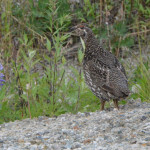 The road continues to climb, and on one turn I spotted something near the side of the road.  A grouse was standing still just at the side of the road watching me approach and hoping stillness would avoid attracting my attention.  I stopped for the photo and got one off before it decided it wasn’t interested in posing any longer. 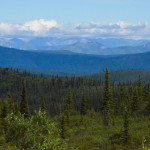 Unlike other roads in the area this one follows ridge lines rather than rivers.  It stays high on the sides of mountains slipping back and forth through minor low spots on the ridge.  So as the road winds back and forth you get a variety of views in every direction.  While the views are sweeping, they also reach to the horizon.  It may take a moment to remember that in all that land you can see there is very little human activity.  Perhaps a little mining claim here or there, and maybe someone exploring, but not a road or a town or power or a house, all the way to the horizon and in some cases for hundreds of miles beyond.

There are two kinds of Tundra, Arctic and Alpine, and I visited both on my trip.  Both have frozen subsoil and cold nights, but the alpine tundra is well drained because it is high on the mountain tops.  So here, high on this ridge we have alpine tundra, with so little “live” soil above the permafrost that mostly all the grows are very small plants, lichens and mosses.  Below these meadow like hill tops short trees grow slowly and sparsely, and further downslope the trees are able to put down deeper roots and grow taller.

I am torn between enjoying the smooth road at speed and making the short 65 mile road last.  It was tempting to get a little slide in the corners and vertical acceleration in dips and over rises, but for the most part I let the car nearly coast along the road. 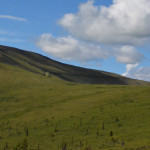 I stopped a couple of times and went for a short walk.  Took some pictures of the small plants and scenery.  More traffic this morning, plenty of RVs heading up and over.  Early in the day the sky is bluer and clouds are puffy and white.  These clouds pass over slowly and paint the hills with sunlight and shadow, never the same view for more than a moment.  On a couple of steeper north facing slopes a few patches of snow remain. 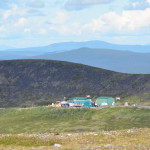 As the road approaches the Alaska border it reaches a high point overlooking the border stations.  There is a large pullout here and some small roads heading off in along the ridges.  There are a couple of areas near the parking lot where people have built small and large cairnes of stones.  It wasn’t clear to me just what their purpose was, but they were everywhere.

The tundra here is mostly lichens and mosses, a deep spongy mass on top of the frozen soil below.  I wanted some pictures of my vehicles here in the tundra, but the roads were very narrow and without any visible place to turn around along the path that I could see.  So I backed the trailer along one of the roads for a quarter mile or so.  This provided just the setting I was looking for.

From here I will head down and cross into Alaska and on to Chicken.

Approaching the Ferry on foot along the path at the top of the dike.

The ferry just leaving this shore

Heading across, looking down river

Starting their maneuver to land on the west side.

The road up the hill.

On the Ferry we were instructed to stay inside.

I asked this deck hand if he could take some photos and he was happy to do so.

Looking toward the east side

As you can see plenty of space behind for more cars

Looking back across the Yukon from the west side.

Darker colored, larger fox appeared to be the parent

Smaller brown and black fox seemed to be a youth

Closer shot of the youth as it trotted off the road

Backroads Behind Dawson City
Next