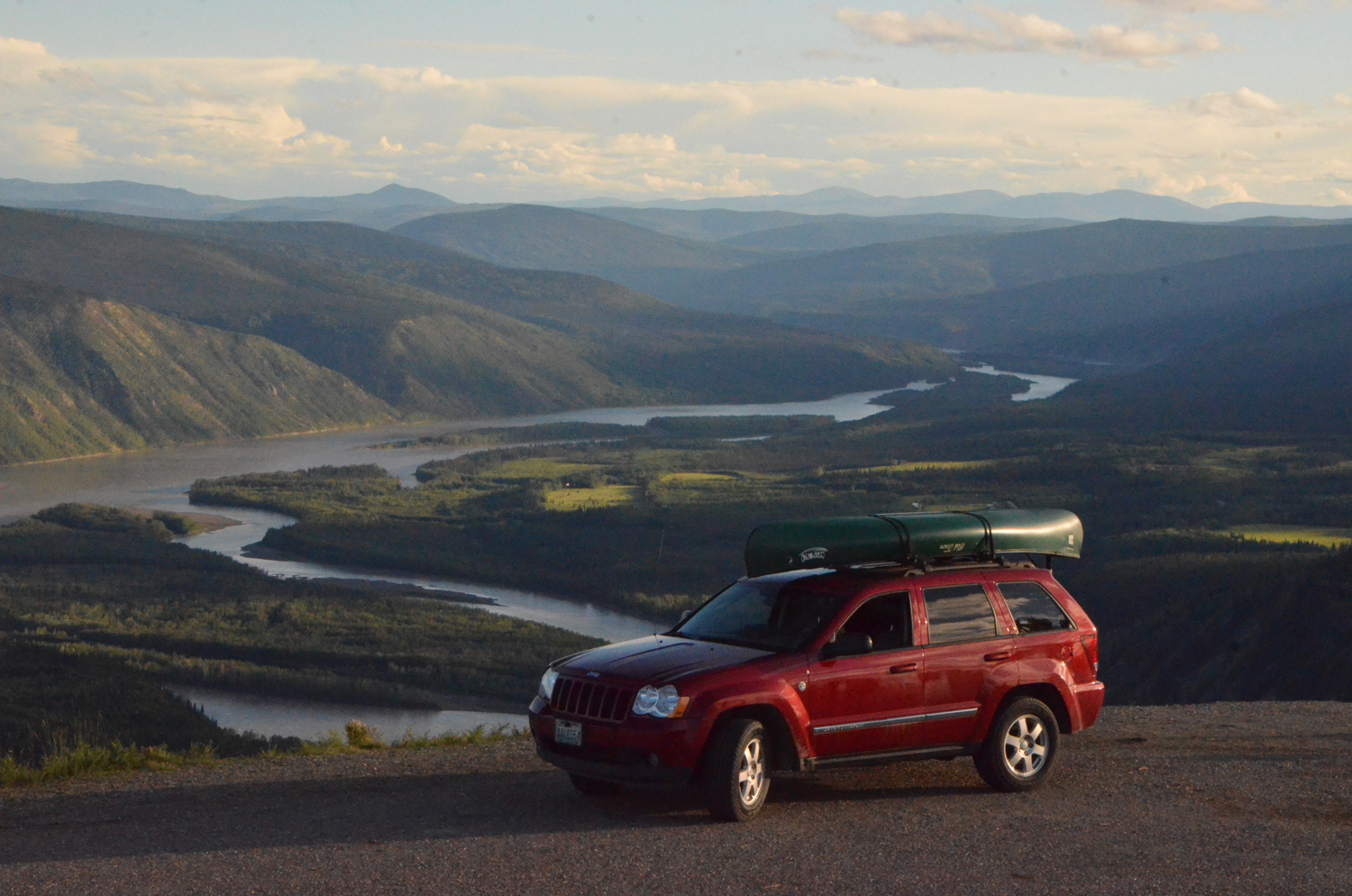 June 26-27 – Dawson City, Yukon Territory – Two days in Dawson City allowed me to do some wandering on foot and by vehicle, taste a bit of the local fare and relax a bit.  Downtown was only a few blocks away, with historic buildings along the route, and the waterfront is nicely developed for walking and sitting with interpretive signs to muse upon. For adventure I went driving on some of the local dirt roads in the mining districts.  Back near town don’t miss the paved road to the top of Midnight Dome for a view of Dawson City and the Yukon and Klondike valleys that is worth much more than the short drive.  There was much more to see than two full days would allow, but that’s a reason to return. 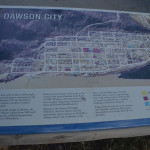 At the confluence of the Klondike and Yukon Rivers is a town that flared bright in the dark winter nights of the late 1890’s.  At its peak this was a city of 40,000 people, in the early 1900’s down to 500 and since the late 1900’s pretty stable at about 1,400.  Gold’s higher price has made placer mining profitable again, roads connecting it to Whitehorse and Alaska and it’s history have brought tourism as well. 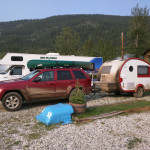 The city is perched on a flat spot and protected from the river by a dike.  This means there is limited space right in town.  Near the river is commercial property and residential begins about halfway back towards the hill.  I stayed at the Goldrush Campground and RV park. The close proximity to downtown worked out very nicely to get me out of the car.  I walked into town several times in the two days I was there.  Klondike Kate’s and Pan of Gold pizza were both just a couple of blocks away and both had good food.  Kate’s can be popular, and I might ask for extra sauce at Pan of Gold.

This was my first experience with highly limited internet. As I wandered the remote reaches of the north I learned that bandwidth is often quite limited for a community as a whole and sometimes you aren’t allowed to purchase more than a small portion of it even if you are willing to pay a lot.  Their WiFi was indeed limited and intended for pretty basic activities like email. 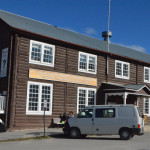 When you arrive in town head over to the Yukon Territory visitor center and get schedules for the attractions.  I wish I would have bought my Parks Canada Pass here rather than over on the East Coast.  Have a look at the Parks Canada site ahead of your visit too.  Talk with the folks there and have them help you sort out an efficient schedule for your visit.  Many of the attractions are only open for short hours and most require a small admission fee.  This will help ensure you don’t miss the things you really wanted to see, and I believe they have some discounts if you plan to see several things. 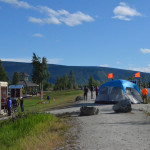 The waterfront is nicely developed for recreation.  A gravel walking trail has a few benches overlooking the river, and is in close proximity to drinks and snacks from the businesses along main street.  While I was in Whitehorse I heard some people at the restaurant talking about some sporting event that they were preparing for the following day.  I learned when I was in Dawson City that this was the Yukon River Quest, a canoe/kayak race.  Starting in Whitehorse, the finish line was here on the Dawson City river front, 444 miles downstream of Whitehorse. 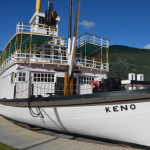 The restored river boat Keno is quite conspicuous, stationed on dry ground along main street on the waterfront side.  You can walk around the outside, and view it from the dike, while access on board is during specific hours for a small fee.   Ships like this would make that run to and from Whitehorse carrying people and supplies.  A working river boat, the Fishwheel is moored nearby, and offers cruises on the Yukon.  At the end of main street at the north end of town is the dock for the George Black Ferry.  The ferry provided by the Yukon Territory Government has no fee and is the continuation of the road to Alaska. 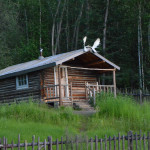 I wandered around town in the Jeep to be sure and see the things I wasn’t able to make time to visit in depth.  Among these are the Robert Service cabin and Jack London Center, both located on the hill at the back of town.  On the main road into town a few miles out is the airport.  As I was coming back from my drive on mining roads I spotted a commercial airliner that hadn’t been there earlier. 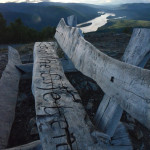 I had heard that one should visit “Midnight Dome”, but hadn’t really figured out how to get there.  On my way back into town I saw a road “Dome Road” and decided I would follow it.  Well that was it, and I got quite a nice view.  I met some nice folks there and helped them take group shots.  You could see all of the city, and both upstream and downstream on the Yukon, as well as up the Klondike a bit.  There is a huge bench there a short walk up the hill that gives a spectacular view.  It’s clever construction includes both a back and a foot rest.

I had planned on spending a full day here, hence two nights.  But I learned that the second day was going to be rainy, and the next stage of the trip is dirt road.  So I decided to take three nights.  My second day was wet, but I used it to venture deep into the mining districts, and had a great time.  But it wasn’t a day for pictures, but for enjoying puddles and mud.  My next post about dredge mining will have a few posts from here.

Sites at the RV park were divided by metal dredge buckets turned upside down and painted blue.

RV park and its office.

A little messy from the construction on the road from Whitehorse to Dawson City.

Here’s the trailer before yesterday’s drive in Whitehorse. I actually took this shot for comparison with the R-Pod parked directly behind. The R-Pod is about 1000 pounds heavier.

Just down from Third and King. Note dirt sidewalks and road.

With me near “Pan of Gold” Pizza.

Pizza was good, plenty of toppings, might ask for extra sauce however. I had a small “Mother Lode”

And they knew what soda water is. Second time got a table out in the screen porch.

Often it is a bit popular.

Yellow split pea soup was quite good. But as you can see that and the burger ended up being a lot of food.

Hostel building looked like it had settled in the middle a bit.

Yukon Territory Visitor Center. Friendly folks, lots of info, willing to take time to chat. Many of the local attractions have short specific hours by day. So stop in for a schedule and help planning an efficient visit.

Back of the Visitor Center. Not sure if the Building Inspector has an office here or if there is a chronic problem 🙂 (It is one of the nicer/newer buildings around)

Main street. The water front is on the right.

Had fish at Sourdough Joes. Breading was crumbly and required some effort to keep it under control. I’m not a fish connoisseur, might have been notable, but to me it was average.

Near the north end of town.

Jeep parked along the waterfront, right in front of the Keno stern wheeler. In the background see the remains of a prehistoric landslide. Local legends tell how this land was dropped on invaders.

Tours of the Keno are available for a small admission, at some specific hours.

Stern wheel of the Keno

Historical cabin on the waterfront.

The town is protected by a dike along the river. The top of the dike has a gravel trail for recreation. This is on the road coming into town.

Near downtown on the dike trail.

Looking at main street from the Dike.

Interpretive signs near the Keno along the waterfront.

On the other side of the path.

The day I left Whitehorse was the start of the Yukon River Quest Race. 444 miles on the water. This is the finish line.

Water from the Klondike river is not as silt laden as the Yukon, you can see the darker Klondike water mixing with the Yukon here from the dike trail.

The George Black car ferry in the distance.

Several spots with nice benches to sit and take in the view. Close proximity to main street makes having a bit of ice cream, a snack or a beverage pretty simple.

The small building up high is a “cache”. This is where you put things that you need to keep away from nosey wildlife.

One of two vehicle washes in town. I washed the Jeep here.

The other wash, at the other campground. I washed the trailer here before going back and riding the ferry north.

View from Midnight Dome, looking south along the Yukon. That’s upstream to Whitehorse (444 miles). Dawson city in the foreground.

Looking north, downstream of the Yukon. 1500 miles to the Bering Sea.

“Top of the Life Bench” quite comfortable with its foot rest. A view that may require a bench to soak it in.

Me in front of the north view (downstream Yukon)

Fellow travelers, I offered to take this shot from up on top with my long lens.

Only appropriate that there be a silly shot too.

View with the Jeep. Sun will be up a while longer, but it is low in the sky for a while.

The Klondike Trail
Next