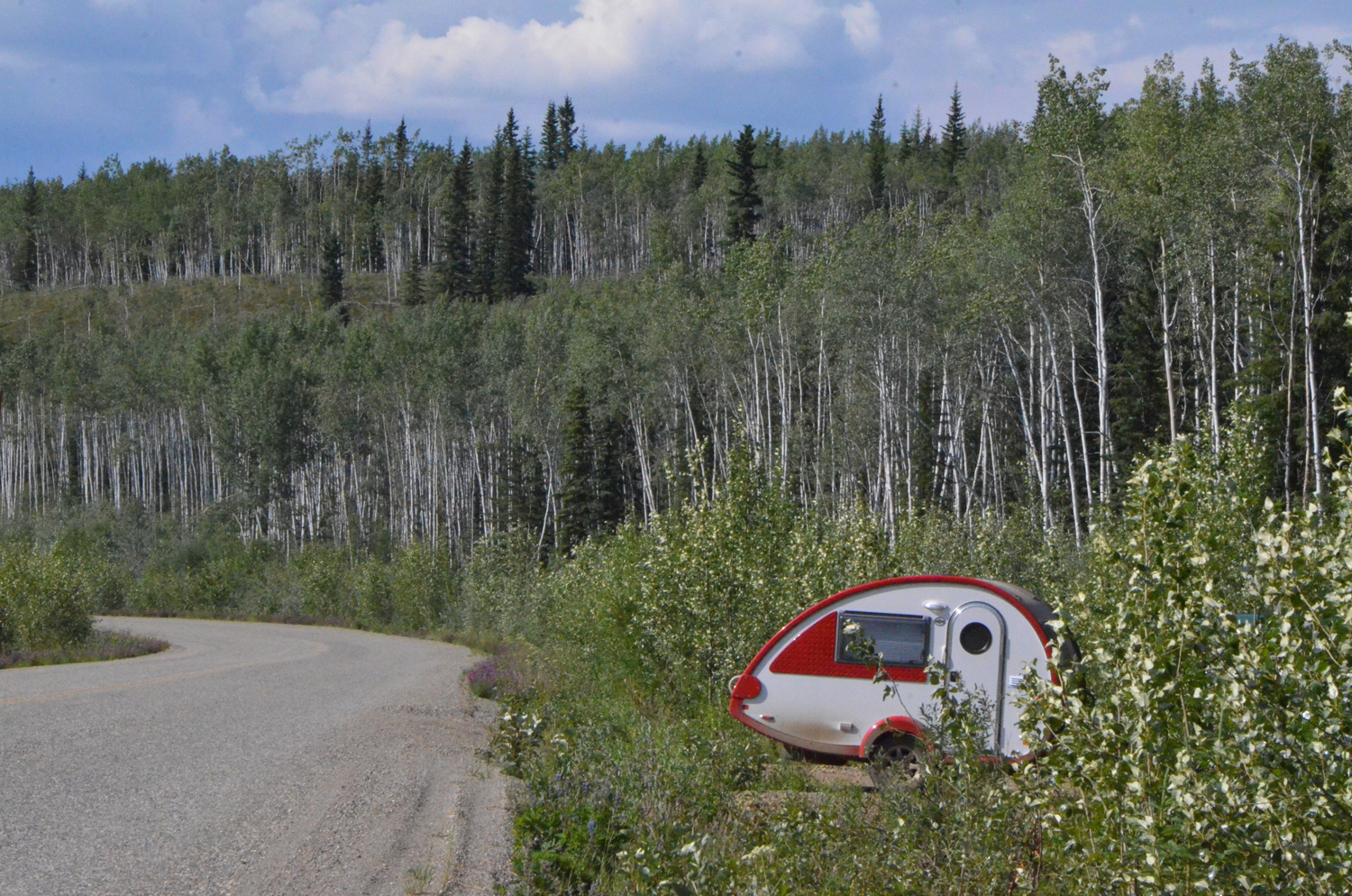 June 25, 2015 – Whitehorse to Dawson City YT – I’ve decided to take a long detour away from the Alaska highway to follow some history.  I will head north along the Yukon river to the confluence with the Klondike river and Dawson City.  Along the way I’ll stop at Lake Laberge, slog through some muddy construction, witness a huge thunderhead above a wildfire, and get up close with the wildflowers at kilometer post 582.

Reports are that construction is pretty gruesome on the next stretch of the Alaska highway headed north from Whitehorse.  Other reports say that that the alternate route over the “Top of the World” highway has been recently graded and is in its best state in years.  The alternate called the Klondike loop is really only an extra 100 miles, and not an uncommon choice.  I will drive the section of the Alaska Highway I bypass (Tok to Whitehorse) on the way south.  So I am heading north along the Yukon river to Dawson City.  Here the Yukon meets the Klondike river.  This is the historic Klondike Gold Rush Trail.

The rush came with news of gold in the Klondike, and people poured into the area.  They came up the Alaska coast as far as Haines and Skagway, 100 miles over the steep frozen passes and down the east side of the mountains to Whitehorse.  From here it was another 350 miles over the frozen rivers and lakes to Dawson City.  Today my route parallels this old trail, I’m not bringing a year’s worth of food as they were required to do, and in hours I’ll make the trip that took most of them a year or more. 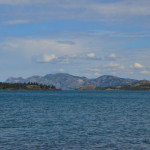 Just outside of Whitehorse the Yukon River widens into Lake Laberge.  This 30 mile long lake and others like it on the Yukon River formed most of the Klondike Trail.  As I stopped to see it for myself I recalled the first time I heard Robert Service’s “The Cremation of Sam McGee“, which refers to this lake as “Lebarge”.  I was sitting in the dark around a campfire in the snow and one of the parents recited the poem from memory with every bit of drama.  I had already been reading a lot of Jack London stories and this just threw fuel on the fire.  Of course today I’m seeing blue lake, green forest and purple mountains as far as the eye can see, but most of the year this is a land of white and very little color.

If I had more time I would have stayed at the campground here at the southern end, but I’m anxious to keep moving north.  A sign here indicates that the wreck of a gold rush stern wheeler, that sunk in 1901 was recently located in 2008.  Several other interpretive signs give some small glimpses of the area’s history. 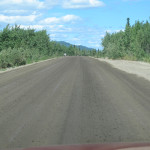 The road here is a two lane chip seal surface.  About five long sections of the road were torn up and in the process of being graded and repaved.  They water the road both to keep dust down and to prepare it for grading, so there is no escaping the muddy spray put up by your own tires.  The silty brown coating starts ever so light and dispersed, it can end up a thick coating on the bottom front of the trailer or in wheel wells.  So the color of the Jeep and Trailer fade under the air brushed covering.

I had this glorious idea that I would bring my own bucket, soap and washing tools to clean the trailer often.  In reality, there isn’t a place to do this on the road.  If the trailer park allowed this, the sites would be covered with mud and most unpleasant.  The few car washes are happy as long as you are using their equipment, but not when you use your own. 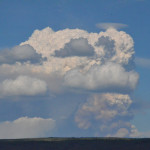 Along the way I spotted a huge billowing cloud prominent on the horizon ahead.  There were other clouds in the sky, but this one seemed to be roiling up from below. When I saw it from a high spot, it clearly reached all the way to the ground, it looked as if something below was pushing forward and leaving a trail of dark clouds along the ground behind.  I stopped to observe the cloud as the road came to high points.  Eventually I came to recognize that it was likely the smoke and heat rising from a wildfire below.  The road stayed to the upwind side of it, so I didn’t have to drive through this smoke, and I left it behind.  I would certainly get my share of smoke before my time in Alaska had expired. 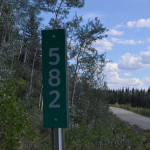 I have been in Boy Scouting for most of my life.  These days I am involved with a Troop number 582.  I had been looking for milepost 582 on the Alaska highway, so I could take a photo to send home.  Only a few historical “mile” posts exist, and not every Kilometer is marked.  As the two opportunities came and went along the Alaska Highway I met with disappointment.  But the Klondike Highway starts some 100 miles south of Whitehorse, so its Kilometer posts should hit 582 late in today’s drive.  I spotted the milepost, but this part of the road had very little shoulder.  I found a spot to pull off about a quarter mile beyond, so I parked and hiked back.

The roadside was brimming with wildflowers, many butterflies and insects flitting about.  Near where I parked there were large flies that were quite aggressive, but as I moved away they did not follow.  I spent some time taking photos of the flowers and the 582 post, and of the trailer as I returned.  Nice reason to stretch my legs and get a little closer to the land I’m driving through.  In the twenty minutes I was parked perhaps a dozen cars passed by.  The forest was silent save for the buzz of insect activity.

I had phoned ahead from the Whitehorse Visitor’s center (no cell phone for me in Canada) and made reservations at an RV park in the heart of Dawson City.  I arrived just before they closed, and got settled in.  There were a couple of spots left that night, but not more than two or three.  The park was close to downtown, and the river front, so I walked over to have a look.  But light as it was (June this far north) not much was open at this hour.

Let’s stop at Lake Laberge and have a look around. Can’t stay here tonight, its only a half hour out of Whitehorse

Park here and go for a walk.

A series of signs at the campground help put the experience in perspective.

The marge of Lake “LeBarge”. This is really only one little corner of the lake. Through that gap is another almost 30 miles of lake.

Muddy gravel, this road is close to being ready for pavement.

Several long sections of road like this with two way traffic. Pass oncoming traffic slowly and with a wide berth to keep rock damage to a minimum. They are marked no passing, so be patient if you get behind someone moving slowly.

Pelly River overlook, I just came over that bridge.

The Pelly flows west to join the Yukon.

My first view of the thunderhead on the horizon.

Telephoto from a highpoint shortly down the road

Further down the road at another high spot

Trailer needs to get in the pic

Reaches right to the ground.

This is about as close as the road came.

Trailer parked along the road as I hike back. Chip seal road with soft gravel shoulder.

Fireweed was quite common and added color everywhere.

Better shot of the butterfly (there were many, so maybe not the same one. :))

For hours, this is what the passing scenery looks like.

Or lined with purple fireweed.

or a distant mountain

and from time to time a nice view of the river.

Enter the Yukon
Next