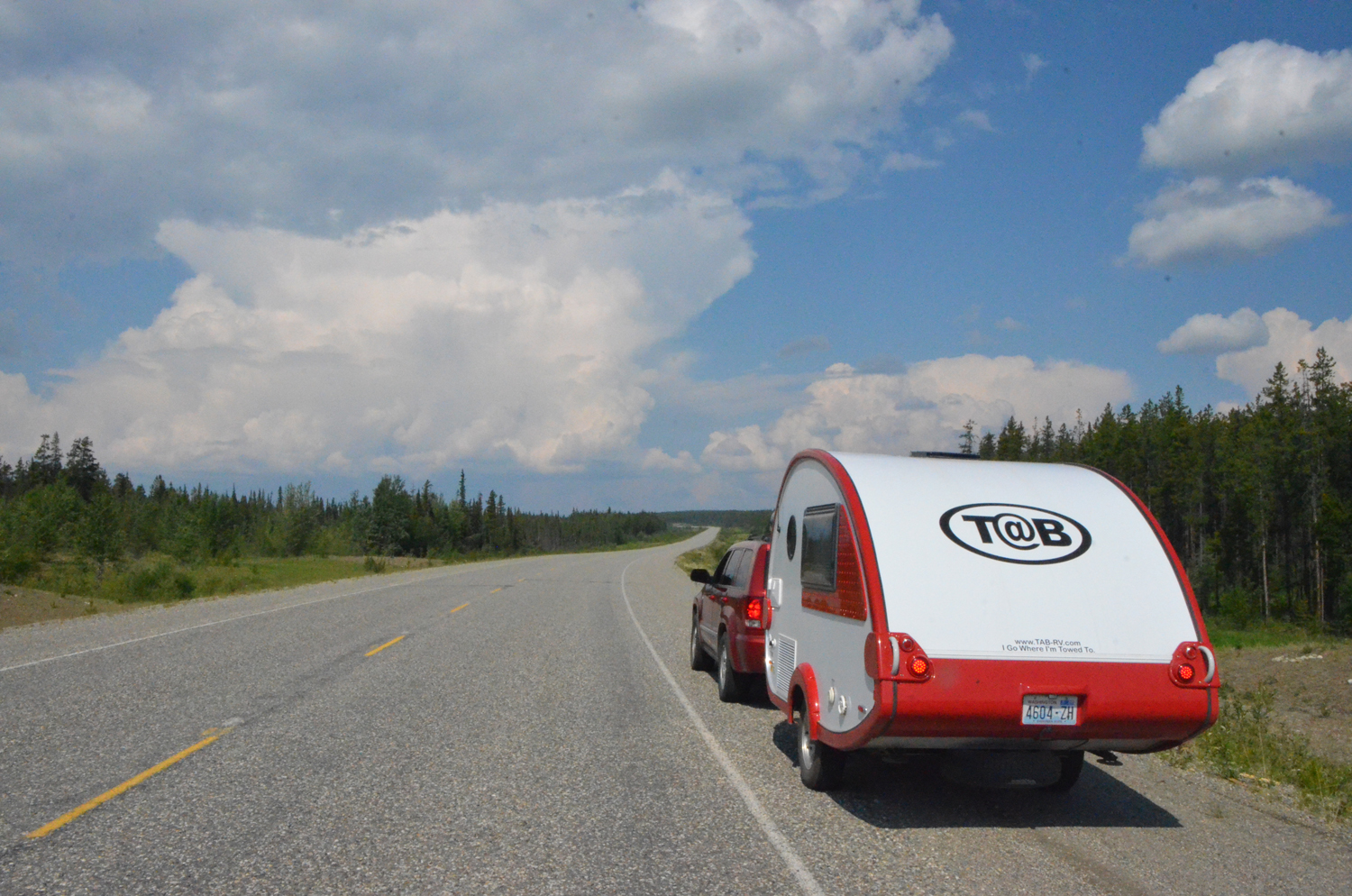 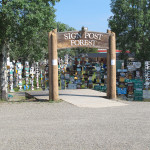 June 24, 2015 – Watson Lake to Whitehorse, Yukon Territory – The Yukon River, the original Alaska Highway.  Today I will enter its watershed and in the weeks to come drive thousands of miles following it, crossing and recrossing it.  Highlights today will be magpies, a porcupine, the continental divide, and arrival at the capitol of Yukon Territory, Whitehorse.
Late arrival last night translated into a late start today.  The RV park was pretty full last night, but this morning I arose to a nearly empty gravel parking lot.  I guess we were all just passing through.  Maybe listening to all the activity lulled me back to sleep.  Blue sky and bright sun until early afternoon when clouds started to puff up.

As I was leaving Watson Lake I could only afford a quick pass around the outside of the Signpost Forest.  I understand there are 75,000 and counting signs here, on posts snaking along trails through the trees. Started when an engineer fixing a sign added a sign pointing to his hometown far away, the tradition as been going as long as the Alaska Highway.  If you are headed this way you are invited to bring a sign of your own.

Shortly along the road is the junction to the north end of the Cassiar Highway.  This is an alternate route north from Prince George.  The route is similar in distance, more scenic and less traveled.  That will be my route home.  I believe I chose correctly as I wanted to head north quickly and spend more time heading back.  The Cassiar is a route you want to spend time exploring.  This route provides access to Stewart/Hyder a bear viewing opportunity that you can drive to.  It also provides the southernmost access to the Alaska Marine Highway ferries (aside from Bellingham Washington).  I also recommend a visit to ‘Ksan Historical Village, whence you will also drive over the Hagwiliet Canyon Bridge. 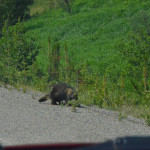 Today I saw a fair sized porcupine crossing the road and happily had my camera ready.  With little traffic it wasn’t a problem to come to stop and take a couple of shots as he ambled in front of the car.  But he moved fast enough that I didn’t have time to get out of the car.  Later I pulled off for a quick break and in the parking lot there were several magpies.  I watched them hopping around, very inquisitive hoping that one of the travelers would have dropped something tasty.  They didn’t let me get very close.  Along with afternoon clouds I also passed through a few areas of smoke from wildfires.  Not too bad today, certainly nothing compared to what I would experience inland around Fairbanks. 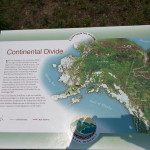 At about historical mile 699 the road leaves the upper reaches of the Mackenzie River watershed and crosses into the Yukon River watershed.  These are two of the largest drainage areas in North America and as such this is effectively a continental divide.  Much different from the tall sharp crests of the Rocky Mountains in the lower 48, without the sign you would like not take note.  Water flowing west from this point finds its way into the Yukon River and will travel some 2,300 miles north and then west to the Bering Sea.  To the west of here the upper reaches of the drainage are ice fields and glaciers that are only tens of miles from the fjiords that connect with the Gulf of Alaska, yet the water flows away to the east, then north on a grand journey.  From BC to Yukon and through central Alaska, the watershed is 25% larger than the state of Texas.

Today’s destination is Whitehorse the capitol of Yukon Territory and the largest city in “northern Canada”.  In a key geographic location, it provides every kind of service for locals and travelers alike.  The Walmart here has a designated area for campers, but they spill out a bit.  I get my spot and go for a walk to find some food.  Tomorrow I plan to leave the Alaska highway and take a loop detour.  I will head north along the Yukon to Dawson City, following the route of the Klondike gold rush.

Late arrival, it is still quite light at 11pm. I was at the end of a long row of RVs and there was a row of RV’s directly across as well.

Next morning at the RV park. Everyone else got a head start.

I didn’t have time to stop and walk through it

So I just drove around and took a couple of pictures

I had hoped to take the time to come back on my way south, but that didn’t work out either.

Dramatic sky was the order of the day.

Wide open spaces, this is a big place.

These lights were in a pair and switched traffic direction about every two minutes.

Stuck in behind that group of vehicles, I decided to give them some time to get further ahead.

I really liked the way the road snaked across the landscape

Why did the porcupine cross the road?

Not really sure, but he made it.

Magpie. They seemed to hop sideways a lot.

This was some of the first wildfire smoke I saw. This area is so large and sparsely populated, they can afford to let fires burn. Fire is a critical part of a healthy ecosystem.

Dinner will be in Boston tonight.

A New Territory
Next