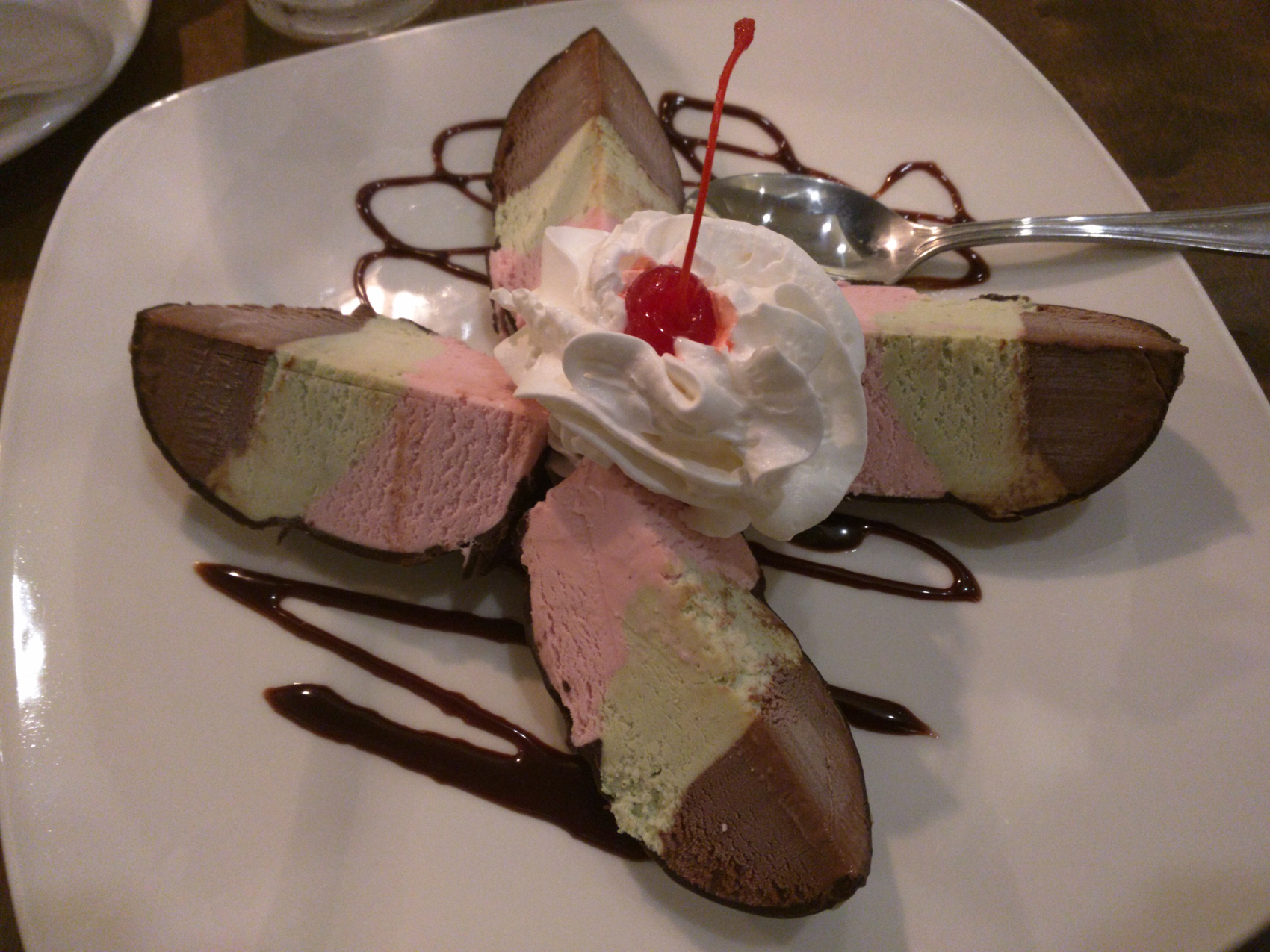 November 2015 – Florida –  This post is mostly stories that revolve around food in Florida.  From Macaroni and Cheese Pizza, to BBQ, to Cuban Pizza and well done Italian.  Top it off with a couple of deserts, one mundane the other not.  I’ve mostly held back on food related posts, but these fell together with a sort of theme. 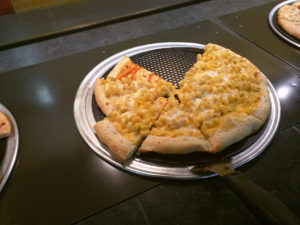 Over the Halloween weekend I couldn’t stay at Disney and had to move my trailer to a nearby park.  One night I was looking for dinner and had poked “Pizza” into a search engine.  It came up with a “Pizza Buffet“, so I decided to head out and give it a try.  Little did I know this was a nationwide chain and that it catered to young families.  The first clue was the Macaroni and Cheese Pizza, the second was the well maintained salad bar.  At first it seemed a bit of an odd juxtaposition.  But then I realized.  One is targeting the kids and the other the moms.  Keep them coming back for something they like.  Now I ran a pizza restaurant for five years when I was younger, and I’ve put some crazy stuff through an oven, but the Macaroni and Cheese was a first for me. 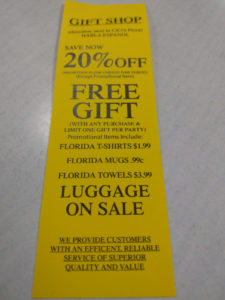 While I was at the pizza buffet I was treated to the other part of the Florida experience.  A guy came through the restaurant with a handful of narrow strips of yellow paper “20% Off” – “Free Gift”, right next door!  Indeed the super discounted souvenir place shared an open wall with the pizza place.  I read it as I listened to the screaming kids and the noise of the game machines and just chalked it up to “an experience”. 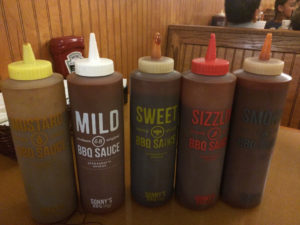 A week or so later, one night after visiting the Everglades out of my trailer near Miami I ran across what appeared to be a very popular BBQ restaurant.  It turns out this is a chain throughout the southeast, and I found the food and service very good for a chain.  I really enjoyed the variety of sauces they provided. 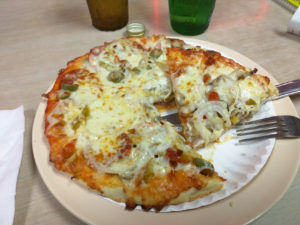 Another place I found while in the Miami area was Rey’s Pizza.  This was one of those experiences that reminds you the world isn’t all the same.  I had no idea how Cuban Pizza would be different, but I really needed to find out for myself.  I went in and sat down, and immediately noticed that every was speaking Spanish, and there was precious little English on signs and such.  The server, a pleasant lady about my age came by with a menu.  She spoke only a very little English, and I was pleased that I was able to ask for soda water (Agua Mineral) such that she could understand.  But short of ordering by pointing, I had to use the translation app on my phone to tell her anything more.  I managed to explain the trip a little and give her a business card for the website.  She was able to respond with a little English.  By the time I left I felt a little more comfortable. 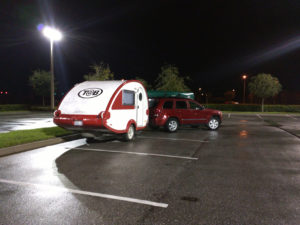 On my way north to Crystal Springs I stopped for food in Venice.  It was raining cats and dogs and I was pulling the trailer.  So I was looking for something with a big parking lot, which usually means a mall.  I spotted the sign of an Italian place in a strip mall and pulled the trailer in just hoping for something palatable, but ended up having one of my best meals in the state. 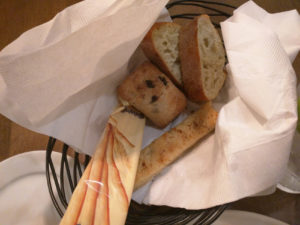 This was Asaro’s Pizzeria and Restaurant.  I had been seated near the kitchen and so I had an opportunity to see a lot of dishes go by before I ordered.  I also got a lot of good input from my server.  I ended up ordering more than I could eat just so I could try things.  A nice Salad, Baked Lasagna, a couple of meatballs.  They served a really wonderful assortment of breads. 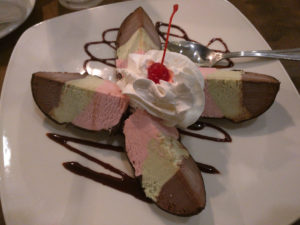 As I was asking for a box she asked about desert.  I was pretty stuffed but she said I should definitely try the Truffle Bomba.  I had no idea what that was but they had won my trust. It was a frozen egg of layered ice cream coated with chocolate.  But the presentation made it so much more.  They had quartered the egg lengthwise and spread it out like the petals of a flower, with whipped cream and a cherry in the center.  It was just right and the presentation was the perfect topping to the meal.

I walked out forgetting my box of leftovers, only realizing this when I got to my car.  When I came back, I saw through the window that my table had been cleared already.  I asked at the front about the box and my waitress came running, so very happy that I had come back.  A wonderful experience. 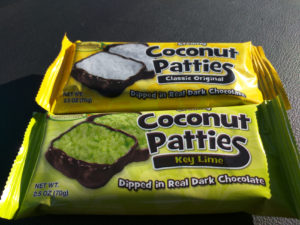 From beautiful presentation to mass produced confection.  I was instructed by a friend that I must seek out the famed “coconut patties” while in Florida.  He had fond memories of this from his childhood.  So along the interstate I found a tourist shop, one of those that advertises all sorts of citruses.  They did indeed have what I sought, in fact they had them in a bewildering variety of both flavors and sizes/packages.  In the end I choose two or three seemingly main stream flavors and small sizes and away I went.  Tasty enough, but the kind of thing you might choose once a year or longer.

I think I had heard of Macaroni and Cheese Pizza before, but had dismissed it as an urban legend.

This kind of thing is likely prevalent in any really big tourist town. Really clinched the experience here.

Now that is a fine BBQ meal.

A very nice assortment of breads

Dipped in real dark chocolate. “real” or “real dark” not sure.

Random photo at a rest area. Trailer included for scale.