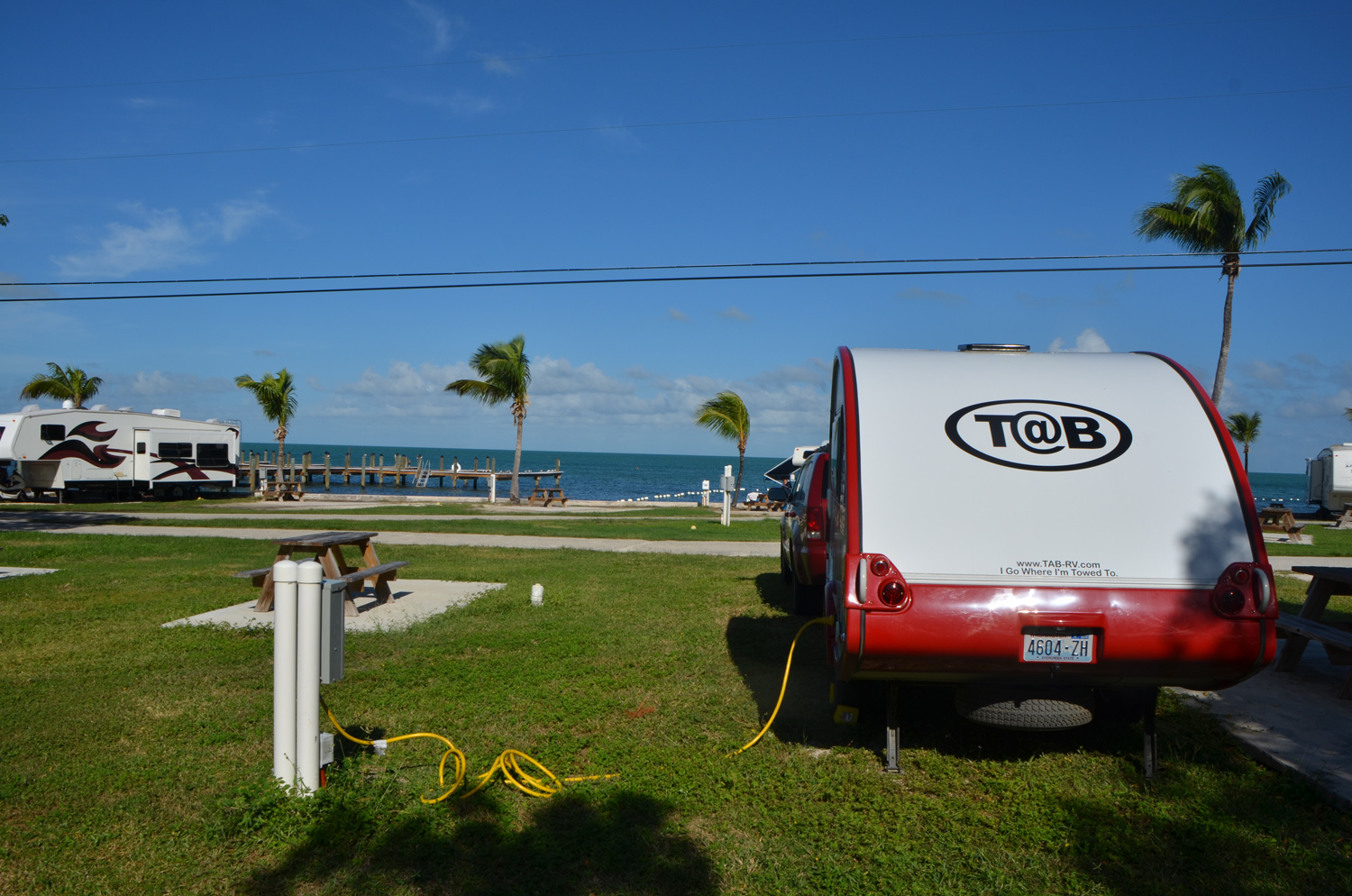 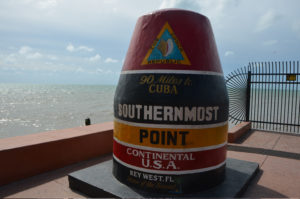 November 5th-7th, 2015 – Florida Keys – Having driven above the Arctic Circle out onto the North Slope Tundra, and to Cape Spear in Newfoundland, I figured that all the way south was another logical destination.  So I drove out about halfway, out to an RV Park at Grassy Key, and took a day trip the next day into Key West.

I have to say that Key West was a little too busy for my taste.  My taste of it was driving along the streets trying to avoid hitting the cruise ship tourists on bicycles wobbling down the street and the mopeds and motorcycles weaving around traffic, and the cars trying to follow maps along narrow streets half of which were either one way or dead ends.

I landed a parking spot near the “southernmost point buoy” and took my picture there.  Came back to my car and drove away just in time to see a pair of parking folks come around the corner on bikes.  The spot I had been parked in was marked as a residential permit spot, but in front of a house under construction, and the markings appeared to have been painted over.  But the rest of the parking was metered, and so I was probably asking for a parking ticket.  But that didn’t happen. 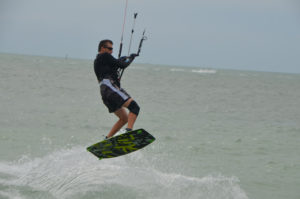 I stopped at a public “pier” a little further along the beach and watched folks kite boarding.  They were skipping along the water quickly leaving a nice wake and then hopping up and doing tricks.  They seemed to enjoy the audience. 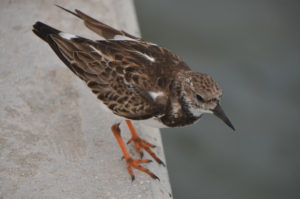 Lots of birds at the beach, plenty of Gulls fighting for the best perch.  A Great Egret stalking fish at the water’s edge.  A few shorebirds flitting around and hanging out on the railings.  Someone had put out some seed and there were a bunch of White Ibis’s enjoying that.  On the shore, there was a lot of seaweed, and a dozen chickens scratching for food there. 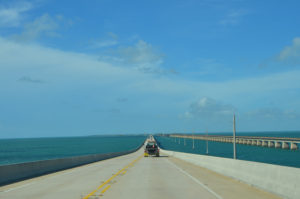 The road out through the keys is called the “overseas highway“.  From the most popular pictures you might get the idea that this was a four lane divided highway.  But those parallel viaducts are “new” and “old” not one direction and the other.  Most of the 100-mile road is two lanes, and perhaps two thirds of it has a 45 mph speed limit.  In short, pack your patience and just stay in line.  There’s too much traffic to allow much passing to take place, and you are just as likely to sit between the next two cars as get any open space to drive. 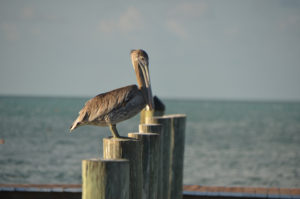 It was pretty warm while I was there and pretty humid.  So most of my activities were somewhere with A/C.  I had some Key Lime pie along the way, and was tempted by every other kind of product made with Key Limes: bars, ice cream, shakes, cookies, and on.

I accomplished my task of reaching the geographical milestone.  So ends chapter three of the adventure.

Scenic “Overseas Highway”, two lanes and low speed limits for most of it.

Ah, cool shade of the evening.

Nice concrete pad. But plenty of ants finding their way up the struts.

Brown Pelican on the pilings at the RV park’s beach.

Looking back at the park from their dock.

The pelican heads out.

Palms in the breeze

These signs are part of a project to lead bird watchers to easy to miss opportunities.

The highway. Note that the other set of piers is old and not in service.

Public Pier, was once set up for cars.

Looking along the beach from the pier

Wild chickens on the beach

Shorebird hanging out on the pier.

Looking back towards the beach from the pier.

As they saw me with the camera, they started coming closer to do their tricks.

Sliding along the water quite quickly

Then up in the air

And often some nice hang time.

For my friends in Fairbanks. Perhaps a northest vs. southest game?

More of the highway

The southernmost point buoy. Quite a line here.

My turn to take a pic.