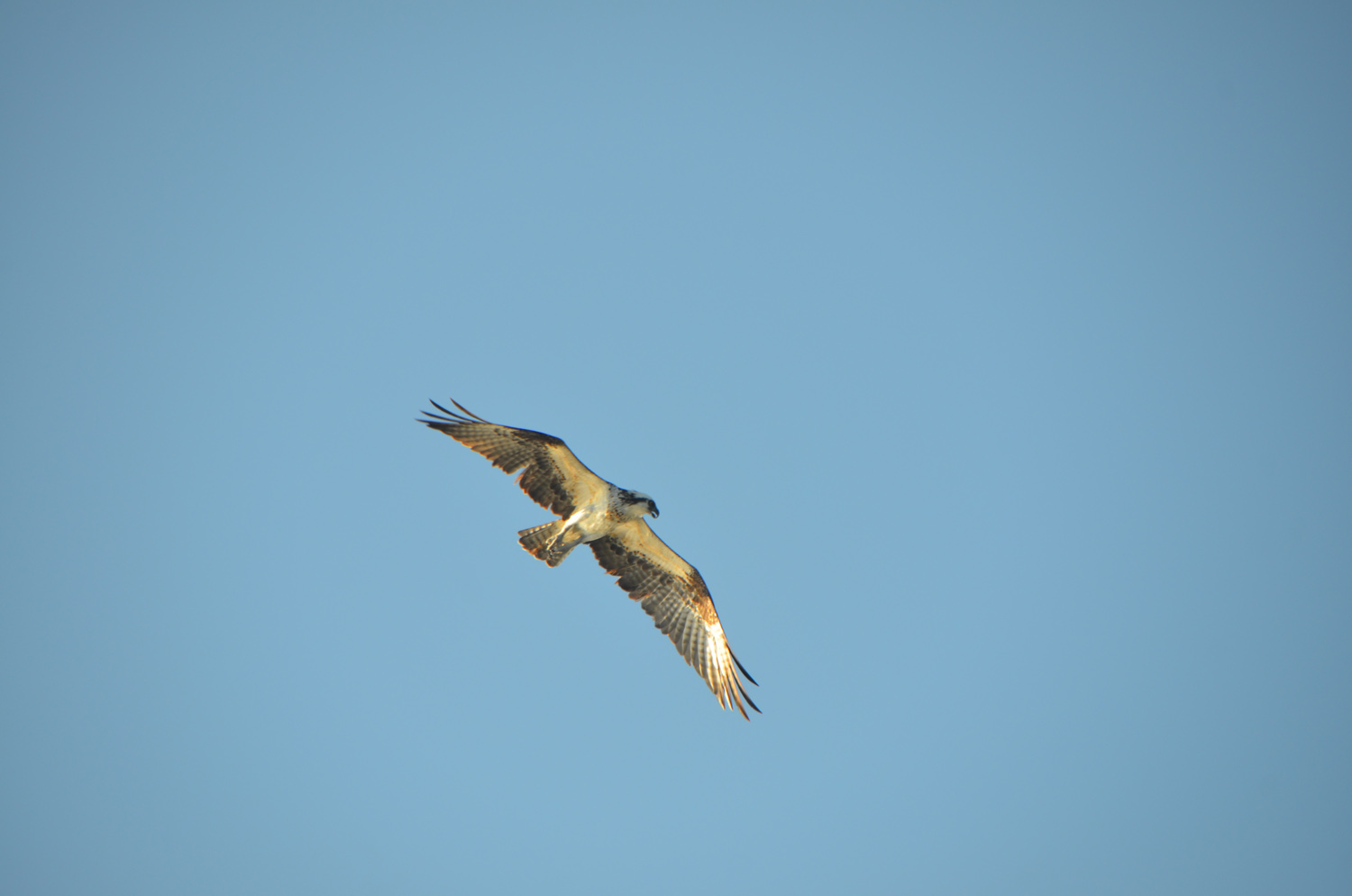 November 7th, 2015 – Everglades National Park, FL – This is Everglades post number one, day one in the park in the south.  I took two boat tours out of the Flamingo Visitor’s center located near the south tip of the park.  Highlights included American Crocodiles, watching an Osprey catch a fish, dolphins swimming under the boat and more wading birds than you can shake point a stick camera at.  Oh, sorry, don’t expect to see pictures of Flamingos, more about that later.  This is post one of three, the other two are about adventures near Everglades City and Shark Valley. 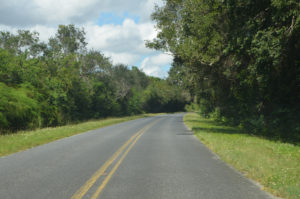 I arrived at the park midday coming in from the keys.  I was able to drop my trailer early at the park near Miami and head out in the Jeep without towing anything.  I stopped briefly at the Ernest Coe Visitor’s center, then drove down a couple of side roads before I headed south to the Flamingo Visitor’s Center.  The road is pretty good and speed limits are on the order of 55 mph most places.  Where the road is through forest, you can see that the Park Service has its hands full keeping the forest from overtaking the road.  But a lot of the trip is through open water soaked grasslands.  There are a number of short trails that I didn’t have time to walk.  Some of the signs remind you that this place is really flat, like “Rock Reef Pass” elevation three feet”. 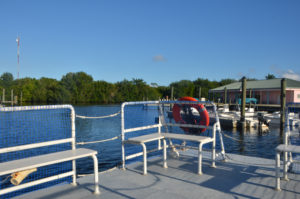 The Flamingo Visitor’s center is at the end of the road, there’s a campground here and a marina.  What you will see on a tour is very unpredictable. I caught the bay tour when tide was at its highest and we saw comparatively less, but two days before the bay was apparently full of dolphins.  So let’s focus on what we did see.

Oh, but first about the Flamingos.  Apparently Flamingos were never really “native” to south Florida, rather they were recent arrivals, some ancestors probably having been blown off course.  But the Europeans really liked Flamingo feathers.  At one point they were worth the same by weight as gold, $25 per ounce.  So, perhaps it goes without saying, there are no more Flamingos because they were hunted until there were none left. 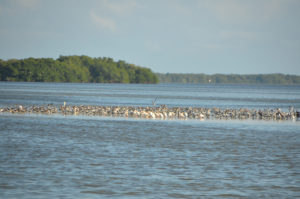 The narration for the trip out into the bay had a lot of history in it, such as the tidbit about the Flamingos.  The bay is very shallow, and much of it wouldn’t be navigable most of the time if it weren’t for dredged channels.  Elsewhere the darker areas are the deeper water, but here the dark areas are grass, and the lighter areas are where we are only seeing sediment in the water.  As to the murky color of the water, it is primarily due to the tidal flow which mixes the water a lot and stirs up the sediment.

There are parts of the bay where manatees frequent, and speed needs to be reduced considerably.  The crew keeps a sharp eye out for signs of these huge mammals.  We saw one come up after we passed, we heard the snort of the breath and saw a nose and that’s about all.  Happily I would get an opportunity to paddle my canoe with the manatees below a few days later. 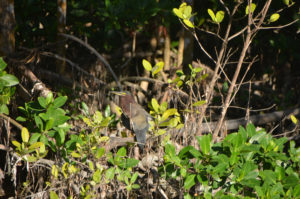 Near the marina were a large number of birds in the trees on a key and many more in the water.  At first it looked like they were all swimming in a tight group, but it turns out that they were wading on a very shallow piece of ground.  That is to say they were waiting for the rest of the mud to become exposed again as it was currently high tide and the water was receding. In the trees we saw Snowy and Great Egrets, and White Ibis, and probably plenty others but we couldn’t get closer due to the shallow water. 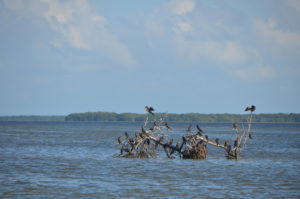 Not far from here we saw a tangle of roots with many Cormorants and Anhinga’s perched and drying the wings. This is “no name key”, a red mangrove tree had been growing here for about fifty years until a recent hurricane upturned it.  Eventually it will likely decay entirely and be swept away, but for now it is a favorite perch. 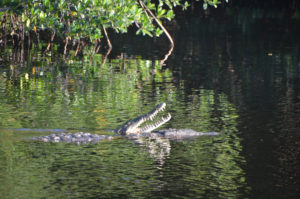 My second boat trip, this tour into the back country, started most auspiciously.  As we pulled out from the dock we spotted the resident crocodile swimming along the far shore of the canal.  So the captain headed that way, but we were in for more than just the normal swimming crocodile this time.  The reason for the swimming soon became apparent as we spotted another crocodile.  The guide recognized the swimming crocodile as the resident lady, and she was chasing this likely male interloper off.  She raised her snout and then opened her jaw, then a little wider and came up and nudged the other crocodile until he turned and left. 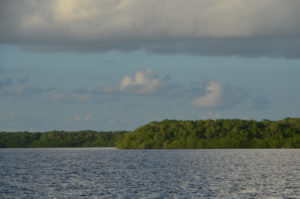 There are only a few thousand American Crocodiles in the wild in the US, so seeing them is quite a treat.  It is primarily a salt water creature, it wants at least brackish (mixed salt and fresh) water to live in, although it can live in fresh water for a week or so.  The American Alligator on the other hand is quite plentiful, with at least two million estimated.  They are fresh water creatures, they can venture into salt/brackish water for a week or so but need to get back to fresh water after this. 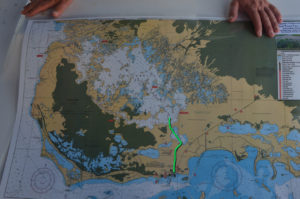 The first part of the trip was through a man-made channel, and the guides talked about the trees and critters, and about how the canal had been a bit of a bad thing until the addition of a dam to keep the salt water from rushing in where it hadn’t previously.  The canal opens into a Cool Bay and after crossing it we followed the natural Tarpon Creek into Whitewater Bay.

They explained that the small bit we were seeing was not the extent of the bay, but rather only perhaps 10 or 15% of it.  This huge inland waterway has a wilderness canoe trail running through it too.  All along the Wilderness Waterway there are sleeping platforms built on in the middle of the water away from bugs and up away from critters. Sounds like quite the potential for an adventure. Along our trip I was coerced into taking the helm for a few choice tourist shots.  I found that the steering on the boat required considerably more revolutions of the wheel to change course than I would have expected.  But while not as responsive, this gives you a lot of leverage and control. 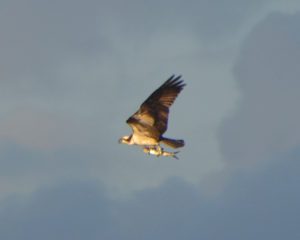 While in Whitewater Bay we came upon a bunch of fish jumping at the surface.  High above we saw an Osprey circling, looking like it was going to drop in for a meal, so we waited.  We saw it make one dive and come up empty.  After climbing high again, it dove a second time and came up with a fair sized bit of dinner. 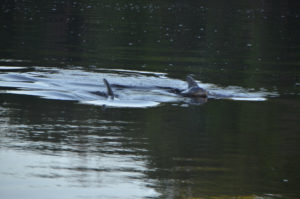 The trip was topped off as we were heading back through Tarpon Creek when we saw three dolphins swimming towards the boat.  One of these was very small, likely three or four weeks old.  They swam towards us and under the boat.  I got a few shots but the dark water up close gave the focusing mechanism on the camera fits and it failed to take the shot.  But we saw them up close as they went under.

In the park where there are trees, they appear to grow quickly.

Great Blue Heron on the Dock.

Leaving the dock on our pontoon boat

These birds are anxiously waiting for the tide to go out, and the mud flats to be exposed, for dinner.

More birds wait in the trees nearby.

This osprey has a view from overhead.

“no man’s key” – this sole mangrove tree got a foothhold then got tipped over in a storm.

On the left larger female crocodile is in her own territory

The smaller male on the right has wandered into her domain. First she shows her teeth and raises her snout.

And some pushing and the male swims away.

AirCam flies overhead. This photo for my Uncle Don.

Mangrove trees pull water up through their roots.

Floating debris fills in between the roots and creates an island.

Note the occasional bright yellow leaf. The roots do a pretty good job of reducing the salt content of the water they take up. But the tree will concentrate what remains in a leaf here and there, and effectively sacrifice it.

Snowy Egrets have just decided they’ve had enough of this boat.

Osprey sees its dinner and down it goes.

Into the water. They have a third eyelid that is semi-transparent and acts like goggles so they can see their prey underwater.

And away with its dinner, a small fish.

Flying off with its catch.

Closer shot, note that the fish is being held aerodynamically. The osprey’s toes are arranged two forward and two backward much like a parrot.

As the sun sets and we head back into the channel.

Two adult dolphins come swimming out of the channel with a very young little one. Probably no more than three weeks old.

As they pass under the boat. Camera was having fits trying to focus.

Our captain and guide.

A map of the Everglades Backcountry.

Our backcountry trip was approximately the green line. Just the beginning of a large expanse of wilderness.