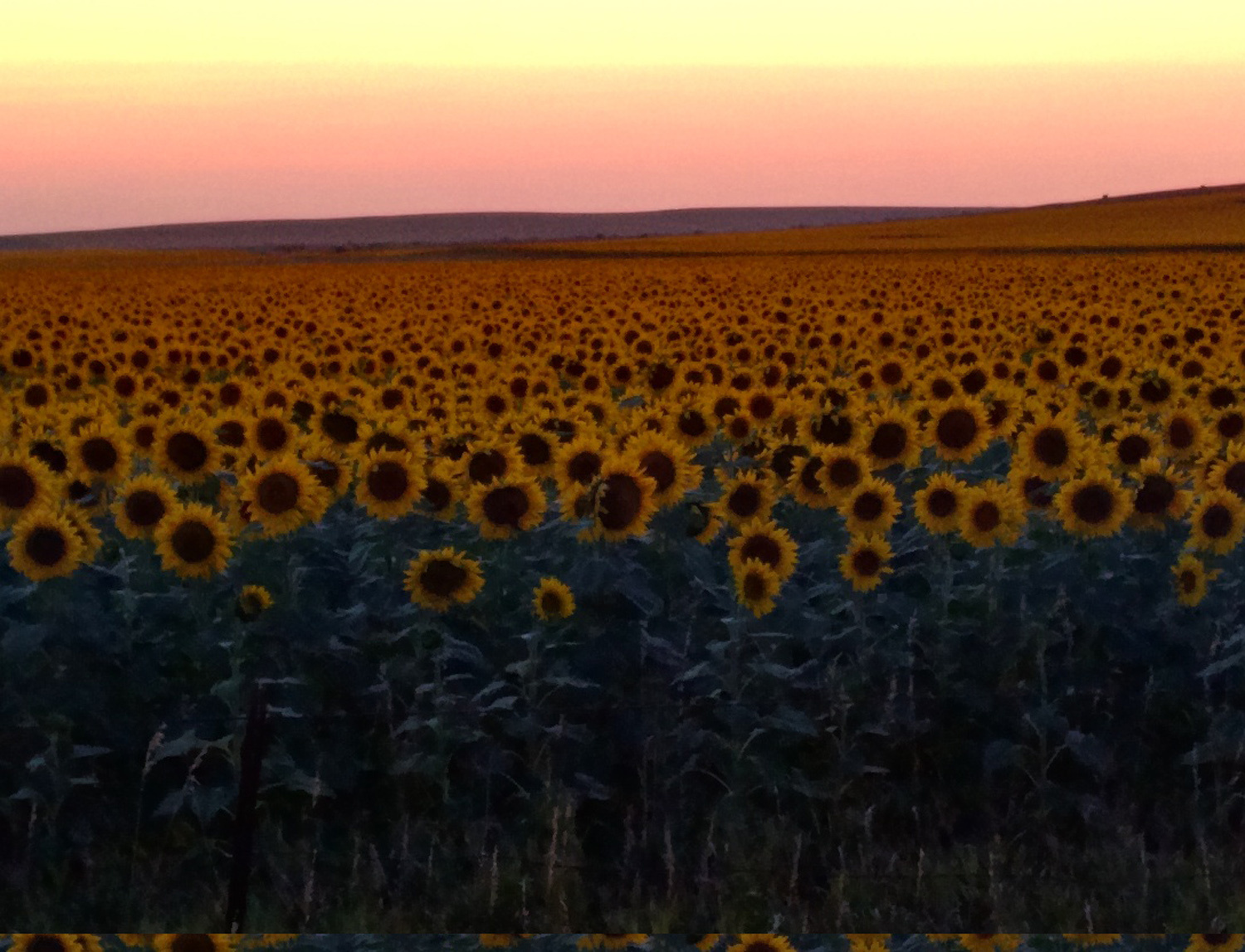 September 2nd, 2015 – Fort Pierre, SD –  Sunflower fields, foggy farmlands, and control over headlights were my rewards.  So far in my eastward trip I felt like I hadn’t been “camping” enough, just staying at developed campgrounds.  The web site for Fort Pierre National Grassland suggested that dispersed camping was allowed within 30 feet of any established roadway.  The reality was a little different, but I got a nice tour of farmlands as the sun went down, and finally found a place several hours after dark.  Having settled in a bit uneasily, I made it a short rest and was gone before the sun was up. 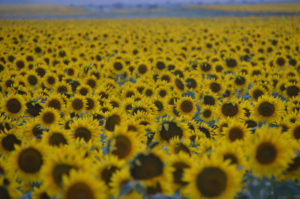 ”Dispersed Camping” the term that land managers use for recreation where the user just finds a place and sets up camp.  Sounded like just the ticket.  Problem is, the national grassland is apparently about 99% leased out to farmers.  Great place for watching birds and other wildlife, but the practicalities of camping were very slim.  “Camping is allowed within 30 feet of the established roadways” was a nice idea, but the areas I toured for an hour or so were narrow gravel roads with steep crowns and ditches on both sides.  The only places with level ground next to the road were also the entrance to some farmer’s field, either range for livestock or planted with a crop.

Well I enjoyed the drive, but got increasingly unhappy about not having anywhere to rest.  I explored at random the west side of the grassland from north to south, as the light was slowly fading and my chances of a successful camping experience with it.  However, the road was very nice, gravel and dirt but smooth and recently wetted by a light rain so not so much dust.  Very little wind and pleasant temperature.  The sunset was very colorful from the fires out west. 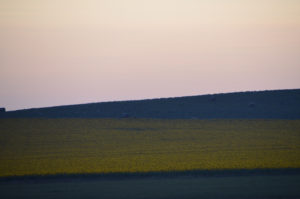 That’s when I came upon a field of something a little different from the others.  A huge field of sunflowers in their prime.  I had seen sunflowers earlier, but often they were still yet to bloom or well past.  They were all pointed east towards me and the sun was setting behind them.  The light was difficult but I got a couple of pictures at least to remind me of the sight.

From here I continued navigating the maze of roads out to the highway 248 on the south that runs parallel to I-90 and back east to highway 83 which is the main north south route through the center of the grasslands.  Here, near the intersection with I-90 I found a large parking area used at some other time for truck inspections but clearly either abandoned or closed this time of year.  I figured it could be a fallback position, but there was a lot of traffic and it felt like I would get a knock on the door.  So I moved on. Heading up the middle of the grassland along route 83. 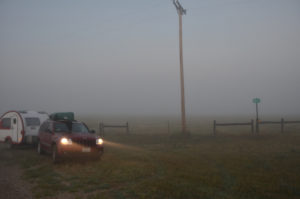 Now, let me tell you about the triumph of the day.  The trailer pushes down on the back of the Jeep a bit and compresses the suspension.  Not enough to need any additional help, but it does level the rake out so that the headlights point up a bit at oncoming traffic.  Not a problem at summer solstice in Alaska when it never gets dark, and not an issue if you are in camp before dark or driving in the dark without the trailer (as in Yellowstone).  But here, it was a problem.

I had inspected the adjustment options on the headlights many times but kept coming up with this paradox.  There is one screw on each assembly, the screw has “R<–>L” inscribed on the plastic that it runs into.  No second screw for up and down, and that’s what needed fixing. I had searched the internet repeatedly in the months before, and stopped on a side road in the grasslands (where I got LTE data!) and searched some more.  This time I hit upon the magic words.

No picture, no real description, but for Jeep Grand Cherokee’s 2005-2010, the WK series, the headlight adjustment is ONLY up and down.  This is because the headlamps have a very crisp vertical light cut off, and I can vouch that you can see that horizontal line clearly as you drive down the road.  So the side to side adjustment is only required for certain markets and is accessed via some hidden screw that requires a lot of disassembly. The only thing I can figure is that the designers used an already available part that is marked with R and L for adjustment and just figured that no one would ever care.

So, about ten minutes later the lights were adjusted.  I counted the turns so I could set it back quickly.  So two turns down with trailer on, two turns back up with trailer off.  Since then I’ve done this adjustment in less than a minute probably a dozen times.

As I was back on 83 heading north, thinking to abandon the grassland I saw a sign pointing to some recreation areas further east.  So I followed these.  One was a water access area, but at night it was hard to tell if I was really just a stone’s throw from someone’s front door.  The other pointed back into the grassland.

Now I was going south along the eastern most side.  But unlike the other side there were signs for trails and signs leading to trailheads.  So I turned down the gravel road with some hope.  But again most of the places I would pull off looked like I would be blocking access or the road or both.  Until I came to an intersection of several roads. 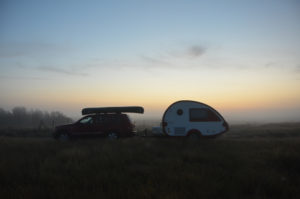 “Hey Emma, what’s the shape in the south field?”

The main road turned from east to north, and I found a wide level area off to the west of the intersection.  Here there was sufficient space alongside a minor road that I could be out of the way.  Not far out of the way, but some.  “Hey Emma, what’s that odd shape in the field?” is not something I wanted to the cute little teardrop trailer to evoke.  So I figured, now I need to rest and set an alarm for pre-sunrise.  Enough rest to get a clear head and then go north with the light.

I woke about a minute before the alarm.  I don’t use an alarm much, but I’m surprised how often I wake up and look at the clock and the alarm is only a minute or two away but not having gone off.  So I silenced it, and looked out the window just in time to see headlights come down the road, turn the corner, and disappear down the other road. 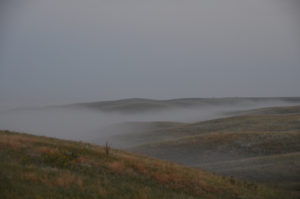 I got dressed and ready and stepped outside to a thick fog and eerie silence.  Heavy dew had soaked the plants and ground and was beaded up on the car and trailer.  I hadn’t bothered to lower the stabilizers or unhook, so I was ready to roll in a minute or two.  A couple of pictures and I was on my way.

Later in the morning, actually more like midday I pulled off the side of the road at a historical marker and made some scrambled eggs.  I was heading north into North Dakota, to catch Interstate 94 heading east.  I had decided I wanted to see all of the great lakes, so I was heading for the upper part of Michigan.

On I-94, now heading east again, I was pushing against a strong wind, and so I had to reduce speed a little.  At one of the rest areas I did some looking ahead for a place to stop and decided maybe a night at a motel would be good.  I found a discounted deal online and booked it.  So I landed in Jamestown at the Super 8, in a queen suite.  I had dinner at a Mexican restaurant within walking distance, and had a great long sound sleep.  Just a lot of adventure in the past few days.

The wide shot of the field

Morning fog in the grassland

“Hey Emma, what’s the shape in the south field?”

Facing northeast, main road comes south from the left, turns at a right angle and heads east to the right. There’s small private road that continues south marked with the street sign. Two dirt roads head off in less structured directions behind and to the right.

Another look at the intersection

Fog settled into the small draws

Where the Lakes Meet