Heading South with the Birds 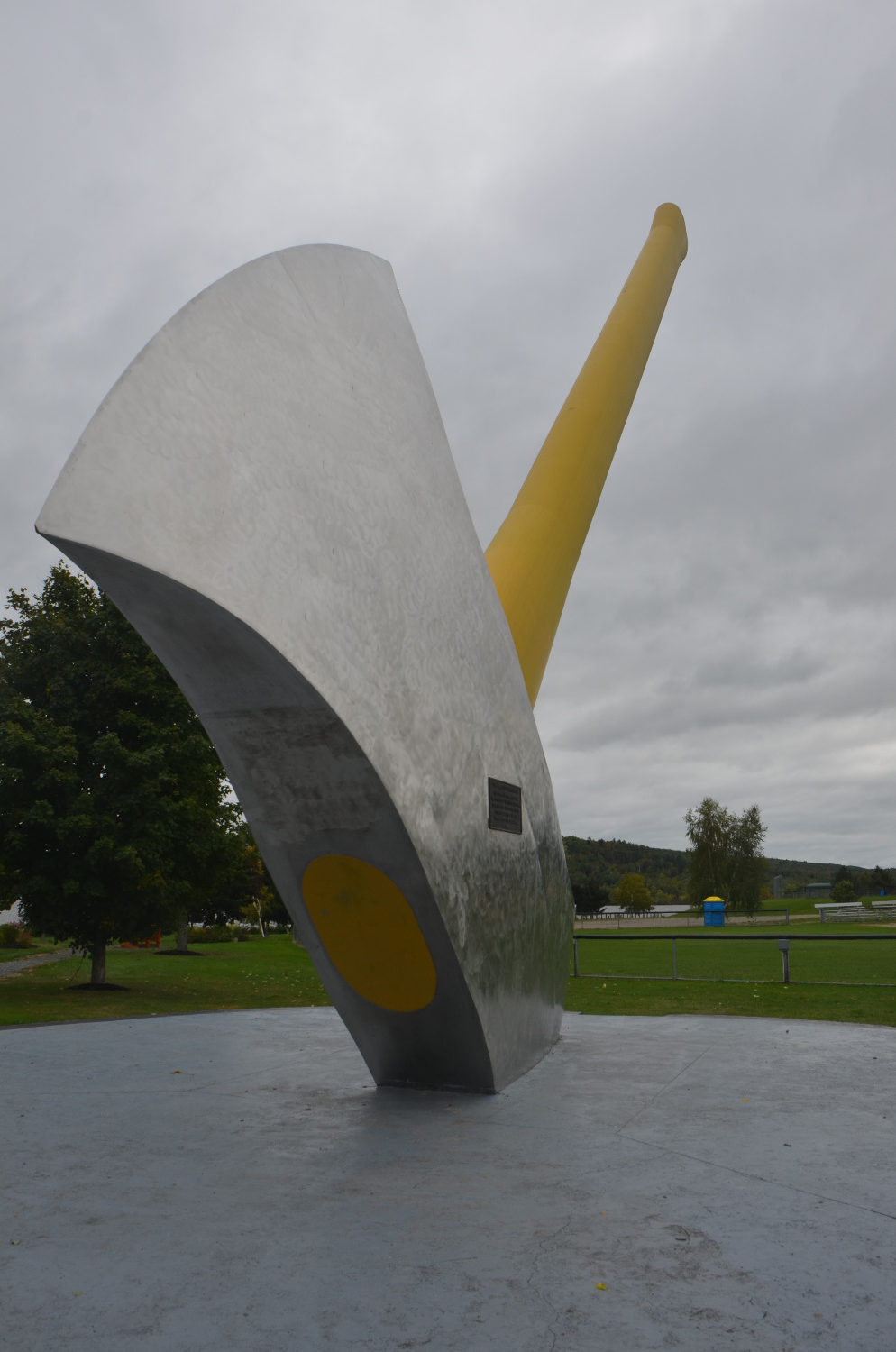 September 30th, 2015 – New Brunswick Canada – And so I’ve done “Eastest” in North America.  As the weather turns cooler I think I’ll take a cue from the migratory fowl and head south.  Not too fast as I don’t like being “swept up” in hurricane season.  So far I’ve been back across Newfoundland, back to Nova Scotia (and a little more exploration of the Cabot Trail), and back to New Brunswick.

Getting back to wide open four lane divided highways was somewhat of a pleasure in New Brunswick.  If there is no head wind, and the hills aren’t too steep, I find that driving at 65 mph is pretty steady and optimizes mileage and time on the road.  With a little wind or steeper hills, I drop down to 60 or 55.  I have found that when traffic is light that faster drivers are used to moving left and passing and most are pretty courteous as they come back to the right.  Most of the truck traffic is going this speed or slower, so it isn’t particularly unusual.

Going up hills I often end up passing heavily laden trucks. One time as I was passing a slower moving truck, I wanted to get back over sooner because there was a faster moving car approaching from a distance.  As I was looking back to gauge the distance to the truck the other car I heard a sound of my car and trailer driving over something in the road.  It sounded like light debris, and I looked in both my mirrors to see what it might have been.  But I didn’t see it, and I needed to get over to the right.  So I did, and the car passed and I drove on.   I was hoping it wasn’t a skunk or some other animal.  No flat tire warning and the car still felt nice and solid so I settled in.

A few minutes later there was an on ramp, and a white Cadillac coupe was coming up.   As I came closer, it accelerated but not fast enough to pass, then it dropped back, passed behind me and pulled up on the left.  The driver was pointing at my trailer like I had a flat or something, and so I slowed down.  He pulled ahead and over to the shoulder, so I followed.  He hopped out of the car and came back to tell me that “one of your jacks is down and throwing sparks all over the place”.  I thanked him and he headed off.

I headed back to examine the trailer, dreading what I would find.  Jack one… up and happy.  Jack two… yep all good.  Jack three and four just fine.   So… what did he see? 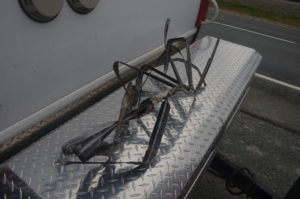 I squatted down and looked under the tongue area.  All good.  Around the back to look from behind?  Sure, there it is, something is on the driver’s side hanging down from the axle.  Of course right next to where the traffic is passing.

I managed to get under and grab it and it came off easily enough.  I’m still not exactly sure what it was.  But if nothing else it was pretty mangled.  It was aluminum, best I could tell it was two long strips like cross pieces spot welded at intervals like a ladder of sorts.  Not heavy enough to bear any weight, more like a thing that protects or retains something else.

The good news is that anything that it could have damaged under that part of the trailer was nicely protected by the custom diamond plate gravel guard.  Okay, so lucky break, but just how lucky?  Up until now it had been a nice day, a little overcast, but not wet.  So all this crawling on the ground was on dry ground.

So, then about fifteen minutes later it started to rain.  Not just some little sprinkle either.  It started to rain like you might be wishing you had an ark in your back yard.  Over the next six hours it rained two and a half inches where I ended up camping, and in some nearby places up to six inches.

As the rain started I was entering New Brunswick, and I was pretty sure I didn’t want to drive in this for another two or three hours to get to my intended destination.  So I stopped at the Visitor’s center and got a pointer to a campground much closer.

I stayed the night at Camper’s City in Mouncton and headed over to the local casino for a buffet dinner.  I joined the club, they saw I was over 50 and so dinner was $7.90 Canadian.  Roast Beef, Beef Ribs, Mussels, Shrimp Jambalya, etc. for the price of a “happy meal”. 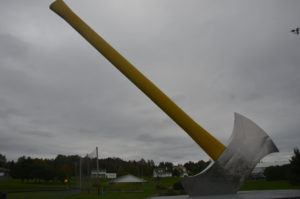 he next day I wandered off the beaten track near Fredericton hoping to see the campground I intended to stay at, but I ended up doing a GPS dance instead, and finally I gave up after enduring about as much country road as I could stand.  I couldn’t get a good match between an accurate address for the place and something I could locate on the GPS.  This primarily because I didn’t have internet here in Canada.

So, in any case my routed did take me through Nackiwic, NB, where I not only saw the worlds largest Axe, but I stopped and cooked a late breakfast in its shadow before I headed back to the four lane, out of Canada and back to the land of cellular internet coverage.