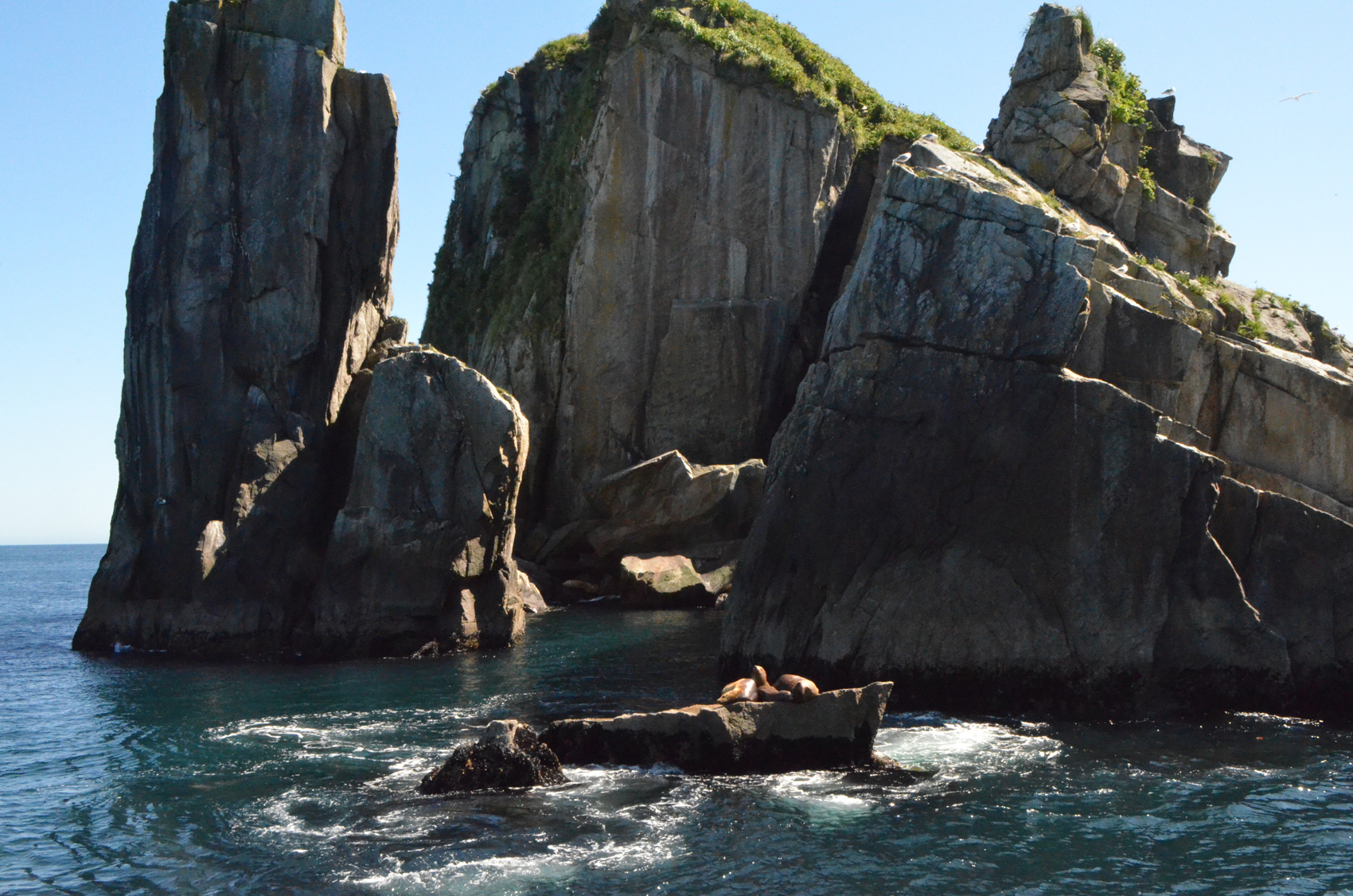 July 19, 2015 – Seward Alaska – Day trip by boat into Kenai Fjords National Park out of Seward Alaska.  This is a photo heavy post. One-in-a-million day, amazing skies, perfect temperature, calm water, lots of wildlife.  Whales, Orcas, Dolphins, Sea Lions, Fur Seals, Harbor Seals, Sea Otters, Puffins, Guillemots/Murres, Kittiwakes, Bald Eagles were all out and enjoying the sun too.  Fjords with forests down to the rocky edge, rocky islands with water lapping around their base.  Kayaks, sailboats, fishing boats, tour boats, cruise ships, everyone was out on the water.  Finished up with a nice dinner on a private island.

Here’s an overview map based on my GPS track.  It doesn’t start right at Seward because I forgot to turn on the GPS until late.

I think I’ll let the captions on the photos tell the story this time.  So start the slideshow…

Walking along the waterfront in Seward heading for the docks.

Boarding pass for my tour

Floating docks from on board the boat.

Cruise ship in port, so lots of people on the tours

Where the mountains meet the sea.

Looking through that gap, next stop is Asia.

Kayakers stopped for a break

The mountains drop right into the sea and are scoured clean where the waves wash.

The black lines on this Glacier are rocks. They were deposited along the outer edges of tributary glaicers as they flowed along smaller valleys.

Dolphin, we saw them at a distance, hard to get a well timed shot, and video was hard to aim because the screen was dim and the day bright.

Whale giving us a wave.

These whales are “logging”, what amounts to sleeping, where half of their brain shuts down while the other half keeps them breathing.

Hard to point the camera and not get a great shot on a day like today.

We spent a while watching a pod of Orcas.

Apparently this was quite a treat for the locals, Orcas aren’t frequently seen here.

We stopped and watched as they swam past.

A couple of older Orcas

And a few smaller ones

The younger group swimming side by side.

Looking back at our wake

A bay along the Fjord.

Ice from the Glacier

Ice calving from the Glacier

Kayakers watching the Glacier for a safe distance

Looking over the end of the Glacier at the mountain behind

A clear bit of Ice. Clear means no air bubbles.

This was one of the most active Glaciers I saw on the trip. The face here is about 300 feet tall.

Kayakers had to move a bit when some larger ice fell and caused a couple of big waves. No worries they had warning.

Harbor Seals hauled out on the floating ice.

We kept our distance so we didn’t make them nervous.

On to the next destination

My spot on the front deck. My day pack served as a nice back cushion, and when I got up to take a photo or two it held my spot.

This puffin in flight is leading us to our next destination

Next stop Chiswell Islands. Notice the gap between rocks, then see the white birds flying in front.

Lots of birds on and flying around every island.

Puffins on the island

Kittiwake flying alongside the boat

A raft of birds, something interesting in the water there.

As I was taking photos of these sea lions…

A whale surfaced in the background.

Grotto on the end of this small island was home to many Sea Lions.

A couple of sea otters

This big sea lion was making a lot of noise and had just chased another off the rock.

All sorts of birds flying every which way overhead.

Closer look at the Kittiwakes nesting.

ID’d as a Shearwater – per comments

Lots of birds hanging out here

All the boats have “Explorer” in the name, so when you leave the boat be sure you remember the first word. “I was on the something explorer” isn’t going to help.

I opted to pay extra for some king crab.

Back at Seward, here’s the ticket dispenser for parking your RV in the converted gravel baseball lot.

Sunday evening, the overflow lot was almost full last night, but I’m about the only resident staying here tonight.