Kitty HawkJuly 4, 2016 FrankLoWa
South With The Birds
0 Comment
US History 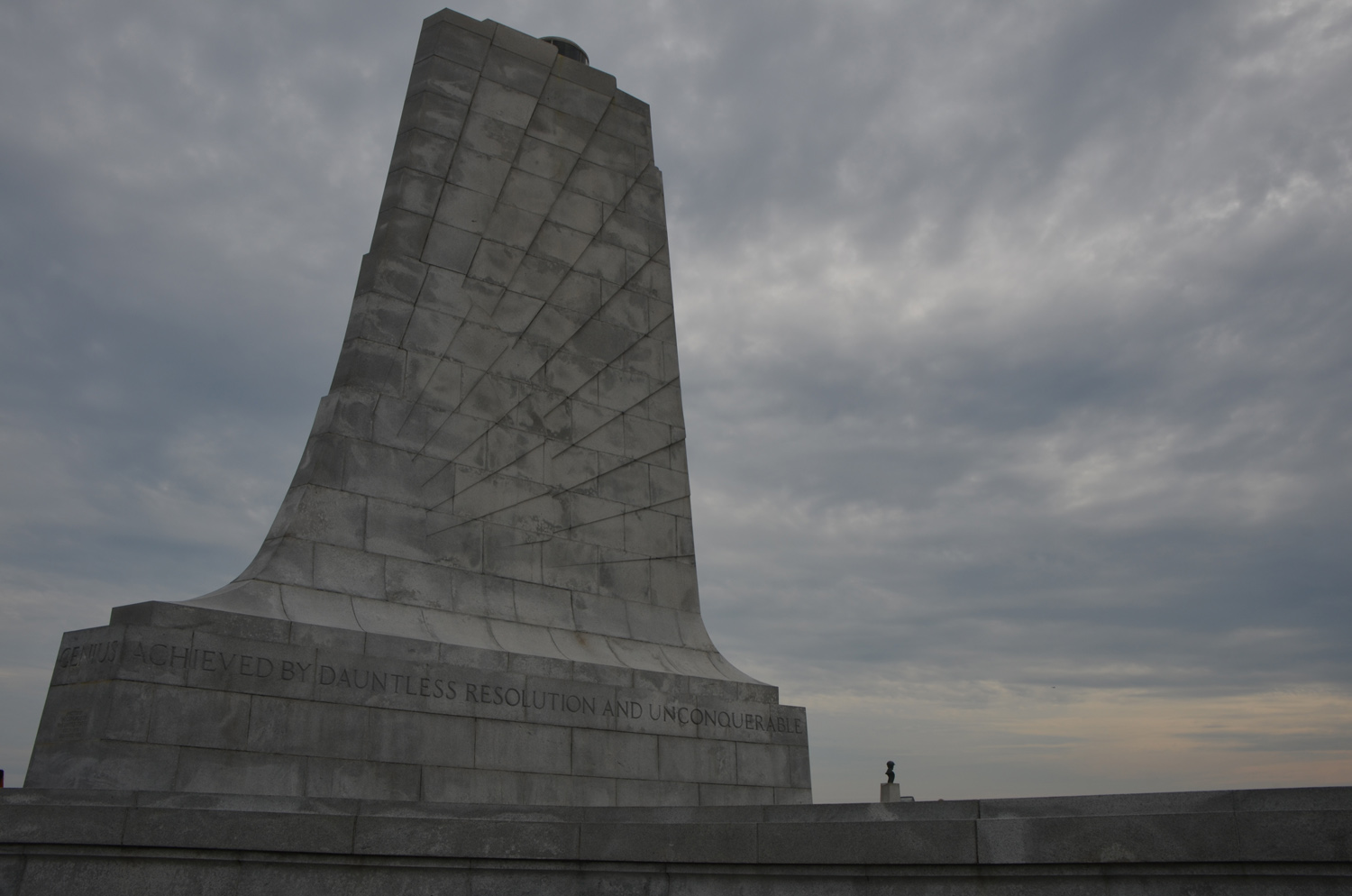 October 25th, 2015 – Kitty Hawk, NC – After the mountains I felt it was time to see a little coast again.  This time Kitty Hawk North Carolina for the Wright Brother’s monument, then down the outer banks. 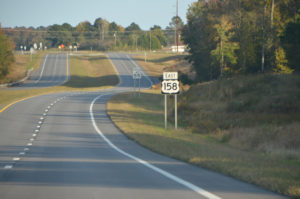 The drive from I-95 over to the coast was along US 158, a number which has some significance to me.  This was my unit number when I was a youth in Boy Scouting and in my 20’s as Scoutmaster of that unit.  Passing through the farmland was quite interesting to me, I don’t believe that I had ever seen cotton growing as a crop in person before, only in photos.  It was a beautiful day, but I needed to keep moving so most of the pictures I got were out the window of the car. 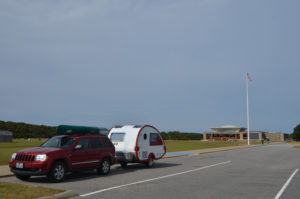 The Wright Brother’s National Memorial was a must see for me.  I clearly remember when I first understood the principle of an airfoil and lift as pressure differentials due to the speed of the air passing over the surfaces.  I had built a model wing with balsa and tissue paper and as I swung it around I could feel the lift, and knowing what it was about was thrilling.  Even today when I look up at a jetliner I think of faster moving air over the top creating low pressure to provide lift, a lot of lift!

When I was probably only three or four years old we were stationed at Wright Patterson AFB in Dayton Ohio.  At the museum there, they had a replica of the Wright flyer.  It took a long time for me to sort out how two guys from Ohio could be doing anything on a sand dune.  Being here, and now as a traveler myself, it really helps bring home the idea of going somewhere to do something special. 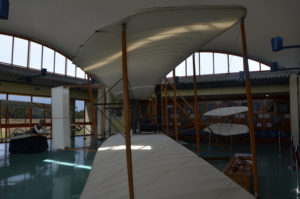 There are basically four things to see here: the visitor’s center, the markers where the first flight took place, the monument on top of Kill Devil Hill, and the sculpture of that first flight.  The first two are really close together and and easy walk from the car and back.  There are presentations by the ranger at regular intervals which I missed being late in the day.  So plan to be there early enough for one of these. 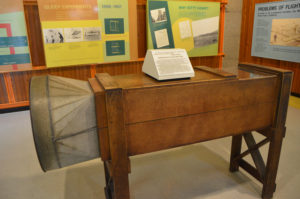 The exhibits are unique from what I’ve seen at other museums, so I recommend taking time to look them over, but it won’t take too long.  They launched the craft on a rail, so there is a replica rail in the ground at the launch site, pretty short if you ask me.  And you can see just how short the first couple of flights were.  It is hard to get pictures of this because there are people walking along the path and enjoying it.  But a little patience netted a couple of less crowded shots. 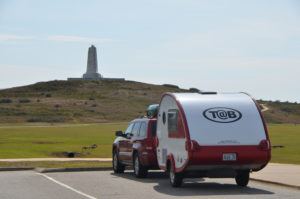 You can walk to the monument, but if you are short on time or not looking to put in your exercise here, you can also drive to the base of the hill.  The walk up the hill isn’t too bad for someone in fair shape, but the last pitch will be hard for someone who isn’t as able.  Nice view from up top.  One thing about the monument is that it has a pedestal and stairs invite you to walk up onto that level area.  The sculpture is along the circular road that follows around the base of the monument. 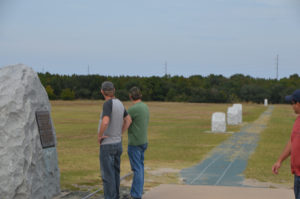 This means that there are almost always people milling about.  So again pictures can be a matter for patience.  In my case there were a procession of large families with lots of little kids.  The kids were chasing each other around, yelling their mock horror at being almost caught.  The parents were trying to pose everyone for a group pictures.  I just wandered around tipped the camera this way and that and found the “space” between all these moving bodies. 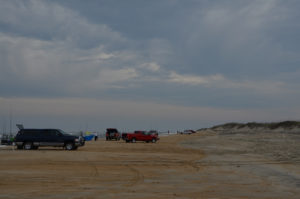 So on to the rest of the outer banks.  I knew that the last ferry at the southern end of things left at 4pm, and I was just heading south at 3pm.  I had also pretty much struck out on camping arrangements, most campgrounds were closed for the season.  So I was certainly going to be driving back up to get back to the mainland if I didn’t stay in a motel.  So I drove south to see what I could see.  Drove as far as Hatteras, as far as you can go without taking a ferry, and back. I stopped a couple of times and trudged through the soft sand out to the beach.  Driving on the beach required an off road permit, and would have meant dropping the trailer and airing down the tires (to about 20lbs to spread out the load) and hitching up and airing up again to get moving again. 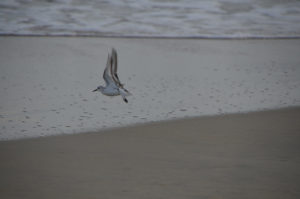 What I found was that the beaches were packed with surf fishermen.  Usually at a given access point there was one direction that was open to driving, and the other that was closed.  So I did walk a few minutes that other direction once.  There was a museum in Hatteras that I might have wanted to visit “Graveyard of the Atlantic” but I was definitely too late for that as the sun was just going down as I left for my drive back up.

Visitor Center in the distance

The workshop/living quarters, and stone monument.

Looking back towards big Kill Devil Hill and the monument.

Parked near the base of Big Kill Devil Hill.

Telephoto from the monument back to the shop and first flight path.

A sculpture of the first flight

Down the road, outer banks.

Seemingly the shore was either allowing driving and packed like this with surf fishermen, or…

Crab in the porta potty.

Watched a couple of shore birds for a while.

Caught this one taking off.