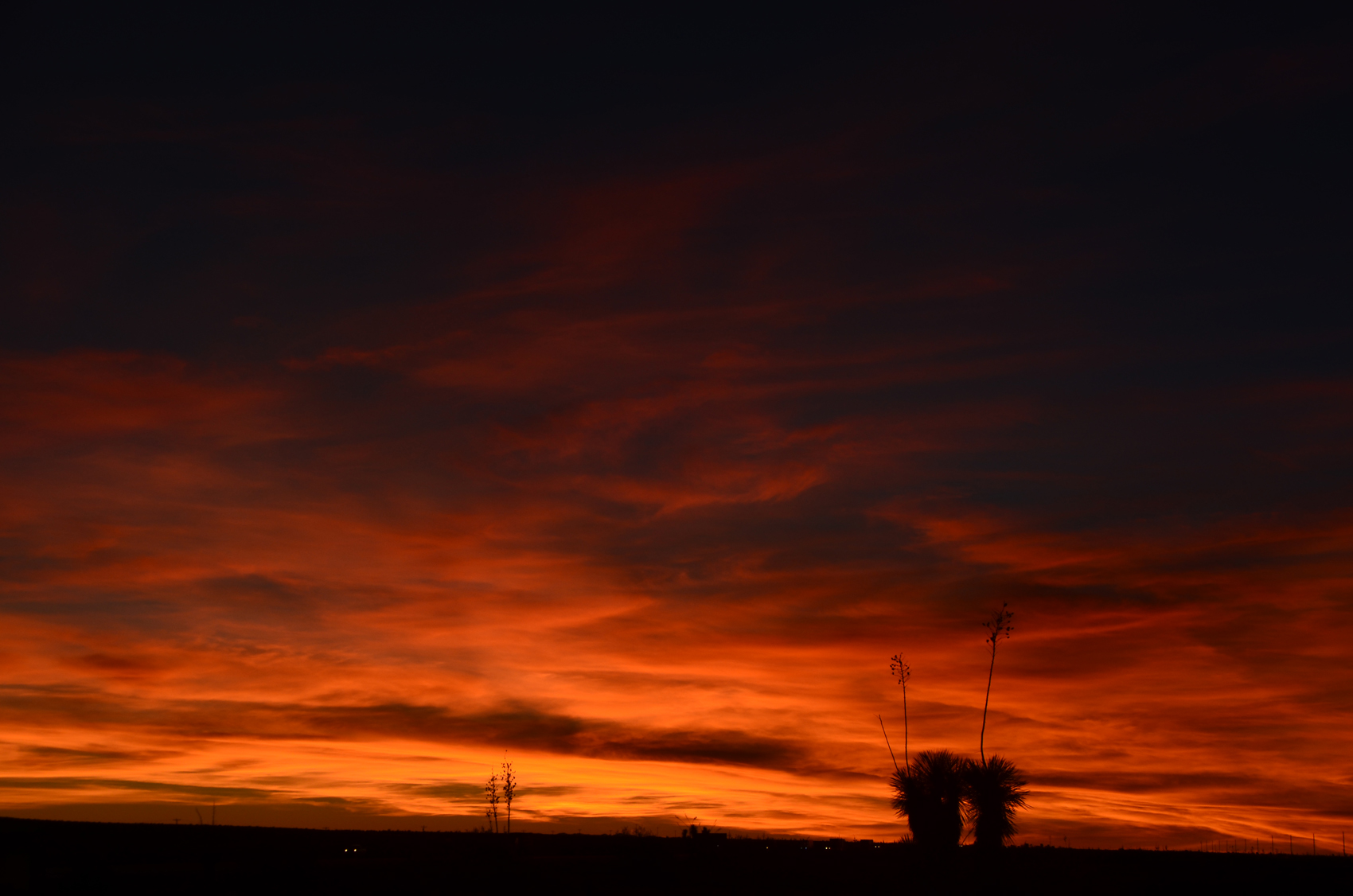 November 17th, 2015 – New Mexico – Continuing along Interstate 10 through Texas I made a detour to visit White Sands National Monument, then continued west across the wide flat plains for some amazing sunsets. 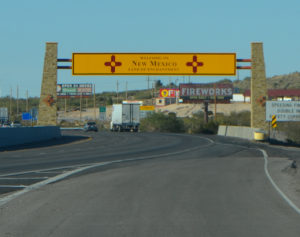 Interstate 10 passes through El Paso Texas then turns north, entering New Mexico at about the middle of the southern edge near Las Cruces. The sign over the road says welcome to New Mexico, and the first exit is numbered zero.  I have to love a system that is zero based.  Alas, the picture of the exit didn’t turn out and you don’t really get a second chance without doing a lot of wandering around. 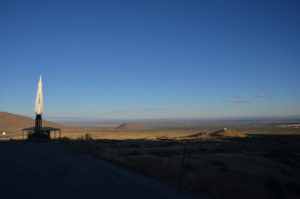 From Las Cruces, a short trip east and north over some hills puts you near Alamagordo and the White Sands National Monument.  I arrived late in the day but just in time for a sunset over the dunes.  If you are planning to visit, make sure to allow for a sunset here.  More about that in another post.  I got a cheap hotel in Alamagordo as it was about the same price as an RV spot and it was late/dark so setting up the trailer wasn’t sounding so good.  Plus I wanted a real shower, and you never know just what to expect of the showers at an RV place.

Next morning I slept in a bit, not really intentionally.  But I found out that the road back to White Sands National Monument had been closed for a couple of hours for a missile test.  So I had unintentionally made some good use of the time.

After a daytime visit at White Sands I headed west.  Back in Las Cruces I started looking for a self service car wash.  The Jeep and Trailer were both looking pretty dirty.  I finally located a place and get stocked up on quarters.  Takes about $10 to nominally wash both vehicles, a little more to hit some of the harder spots.  As I was finishing up I saw a gentleman pull up.  He complemented my rig (not an uncommon start given the trailer).  I was just finished, so I wandered over and told him a little about the adventure.  We talked for a bit through the window of his car.  I gathered he was at least partially of native American descent and he was perhaps a few years older than me.

We talked about family and other things, and then he smiled and said somewhat casually “what you need…” and then he looked away and started poking around between the seats.  He found what he was looking for and turned back.  He held up a small bundle of some kind of plant leaves.  They were neatly and somewhat artistically bound in a silver colored wire.  It was about four inches long and perhaps two inches in diameter.  The leaves sticking out the end were light green with a soft white fuzz.

I really didn’t know what it was he was offering me, so I asked.  He explained “you use it to bless yourself, and to bless your trailer.”  I told him I really didn’t know how that was done.  So he explained that I should light it, blow it out and then waft the smoke over my head and over my trailer.  I was still a little unsure, so I said, “well, I guess I should read a little to learn about that”.   At this point I wasn’t sure what the plants were or if it was too valuable to be accepted without a return gift.  But he smiled and said, “oh, you don’t need this anyhow.  You are a gentle soul, and I can tell that you won’t need it.”  he put it away and smiled a reassuring smile that I could only hope to duplicate.  We said our goodbyes and went our separate ways.  It was only later that I did read a little and identified the plant as sage.  Well, I wish I had accepted the gift.  If for nothing else than to remind me of this wonderful interaction.  I think I would have enjoyed just sitting and talking with him for a while. 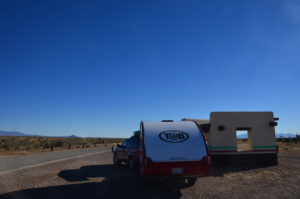 Back on the road west, this is some flat country.  I passed through Akela, and found myself musing about the jungle book.  As the day was winding down I came to a rest area in the middle of nowhere, near the “town” of Gage.  This rest area was really quite nice.  Along side the normal paved parking there were gravel roads that served small picnic shelters.  Each shelter is in the form of a small adobe building.  Serving as a nice wind shelter, with a picnic table inside they also each had their own lighting.  From the signs they didn’t mind folks staying overnight, so I picked one that was a little removed from things, and settled in. 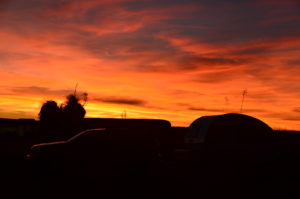 The sunset that night was amazing.  The distant horizon giving a wide sky as a canvas for the colors to be painted out.  The colors of the sky bleeding over onto the gravel and plants, the Jeep, the trailer, the fences and buildings.

I woke to another bright blue sky and just a very light wind.  I can imagine this place gets really windy, but I was lucky during my visit.

When I went to get water in the morning I found that the faucet was turned off.  I was wondering about this when the maintenance guy came around the corner and said he’d turn it back on for me.  He explained that it had been cold enough that they were concerned about the lines freezing.  I guess it had been a little cold last night, but I didn’t think much of it, given the weather we get back home.  So I got some water and headed on my way west.

On the way to Alamogordo

Sunset paint. Least blurry of these pics. Should have pulled out a real camera not just the phone.

Jeep and Trailer silhoutted against the sunset