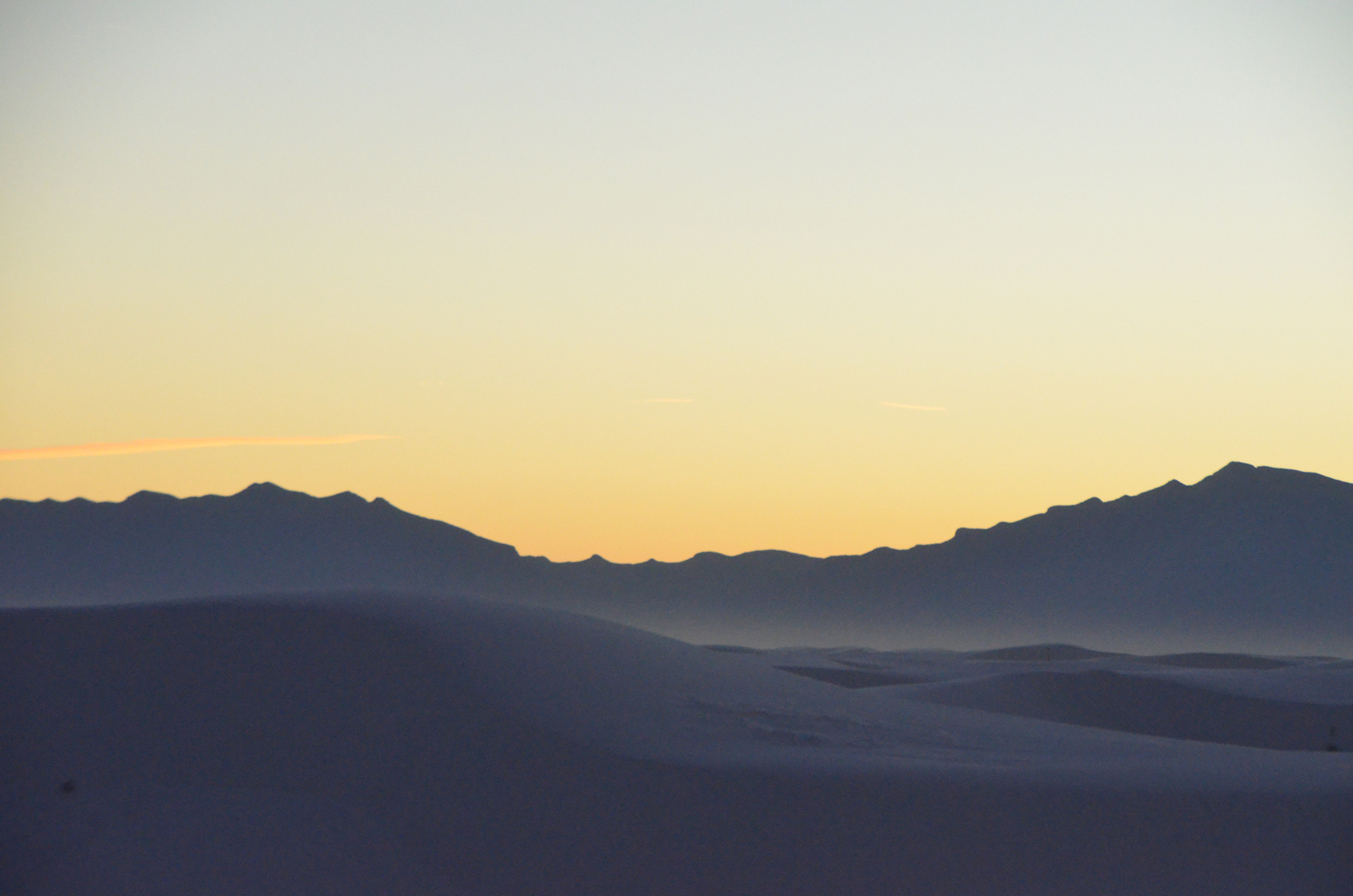 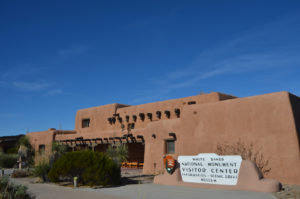 November 17th, 2015 – White Sands National Monument, NM – White Sands National Monument provides an easy way to get close to this amazing natural wonder.  A visit won’t really be complete unless you plan to take in a sunset or two here.  If you only learn one thing, be sure you learn where the white sand comes from.  I actually got my sunset first (on the 17th), but the story tells better if I leave that to last. 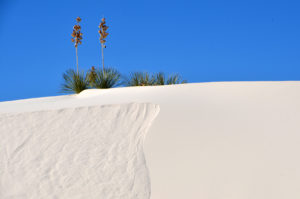 Its dry and mostly hot, so… water.  Okay, after that, be sure you either read about the area before you arrive, take in the exhibits at the visitor center, or join a ranger led program.  Or some combination, so you can really appreciate what you are seeing, rather than just staring at some pretty white hills.

I didn’t get to join in any ranger led activities, but a quick walk through the visitor center and their intro film were worth the time.  The “White” sand isn’t really so white, well not midday anyhow.  The park service does offer some tips about how to get your pictures to turn out well. 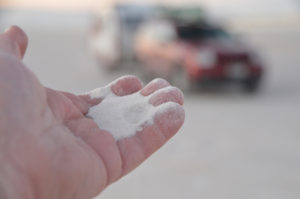 The sand is made up of powder like grains of soft gypsum.  Run-off from the nearby mountains is laden with minerals and this floods a slightly depressed “lake” that has no natural outlet.  The water evaporates leaving the minerals behind.  Selenium crystals grow large in the mud and are carried along by heavy winds.  The crystals are soft and break into increasingly smaller pieces.  While they start out translucent, about the color of apple juice, the surfaces get scratched become opaque, reflecting the bright sunlight. 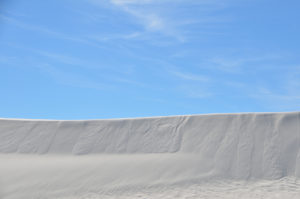 The sand piles up, and more sand is pushed over the crest.  This process causes the piles to move across the land like waves.  The plants living here will grow taller as the sand piles up around them to maintain a bit above the sand where they can get energy from the sun.  If you look at a satellite image you will see that the roads are at the eastern edge of the dunes, so the sand here should be the finest grains. 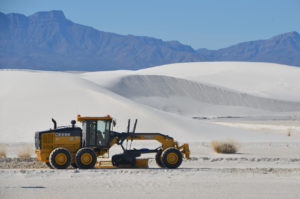 The park service keeps the roads clear of drifting sand using heavy machinery, like road graders.  They scrape and push the new sand to the sides, creating a semi-smooth surface.  They also provide restrooms and picnic areas. 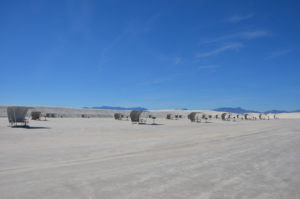 The picnic shelters are arranged in open flat areas and the curved wall and roof provide both shade and shelter from the wind.  They also “hide” behind a dune for some protection from the wind.  This dune makes a great place to slide down as if it were snow.  Not something I did personally on this trip.  🙂 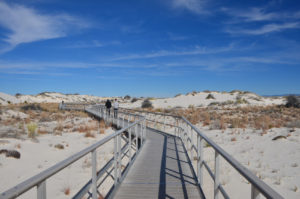 I found the Interdune Boardwalk to be a good stop.  It is a raised walkway over the sand, especially helpful to those who might have a little harder time on soft surfaces.  Look for the grounding cables tying every part of the boardwalk together, and connecting the boardwalk to the ground.  It appears that the low humidity helps any charge generated by walking on the walkway from dissipating, but you’ll get used to the light sparks you generate when you touch the rail.  Got a couple of kids?  It’ll be very popular, or very not popular depending on their personalities. 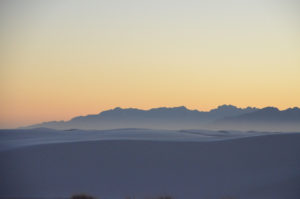 I’ll say it again.  Don’t miss a sunset here.  Evening is when it is easiest to get a “white” sand photo.  When the sun isn’t directly overhead and so bright.  There may be a ranger led walk to take advantage of the sunset, and I’ve heard that’s worth attending.  The perfect conditions are of course a clear or nearly clear sky, and just a little wind.  The lightest particles of sand blow off the tops of the dunes and create a aural glow over the peaks of the dunes.  Don’t forget to turn around when you are watching a sunset.  Often the sky turns some amazing pastel colors on the opposite horizon.

White Sands Visitor Center. Stop here and learn about the origin of the sand as larger Gypsum deposits from the “Playa” Lake Lucerno.

First snow-capped peak I had seen in months. The only one around here, even though it was November. I believe this is Sierra Blanca Peak.

A dune beside the road. The sun was just at the right height for these plants to cast their shadow down the slope. Notice breaks in the smooth surface where the sand has broken loose and slid away.

“Interdune Boardwalk” – Walkway out over the dunes. All parts of this walkway are connected together by large gauge wire, and then grounded to the sand as well. Even so you build up a pretty good charge walking a hundred feet. You’ll get used to the light shocks as you touch the rail.

Dunes are in motion, but the yucca has a way to keep growing as the sand piles up.

Examples of the Yucca on a dune top

Now that you know the yuccas are reaching down deep under all the sand. That crisp new surface isn’t forever, and neither is the part that slid away.

That’s Sierra Blanca peak again, from the end of the walkway.

Tracks in the sand. A mouse?

The “roads” here on the edge of the dunes are graded smooth and sand piled along the sides.

The road as well as the picnic and parking areas.

The texture of the roadway

Picnic area. It was a little cool, here in the off season. So I had the picnic area mostly to myself. Note the piled sand in the foreground. This is looking over a bit of “not road” area.

Reminded me of a drive in movie theater.

The trailer sort of fits in with the decor, yes?

That teardrop shape is popular, no?

There are several picnic areas. Here’s one from the dune nearby.

Look closely at the hills you will see where folks have slid down the dune as if it were covered in snow.

All these bits of sand start out as much larger selenite crystals which are translucent, similar in color to a weak apple juice.

The winds pick up the crystals and the bump against each other, breaking into smaller pieces, and getting scratched up so that they are no longer clear.

But some still have flat smooth edges that catch the sunlight

The leading edge of a dune crests like a wave.

Such a soft and subtle wave

With faces that approach vertical.

and slough off, pile up below.

Folks watching the sunset from atop a dune.

Notice the light halo above the dunes. There was a light wind that was lifting the smallest dust.

Look behind you at a sunset too. The soft pink and purple sky.