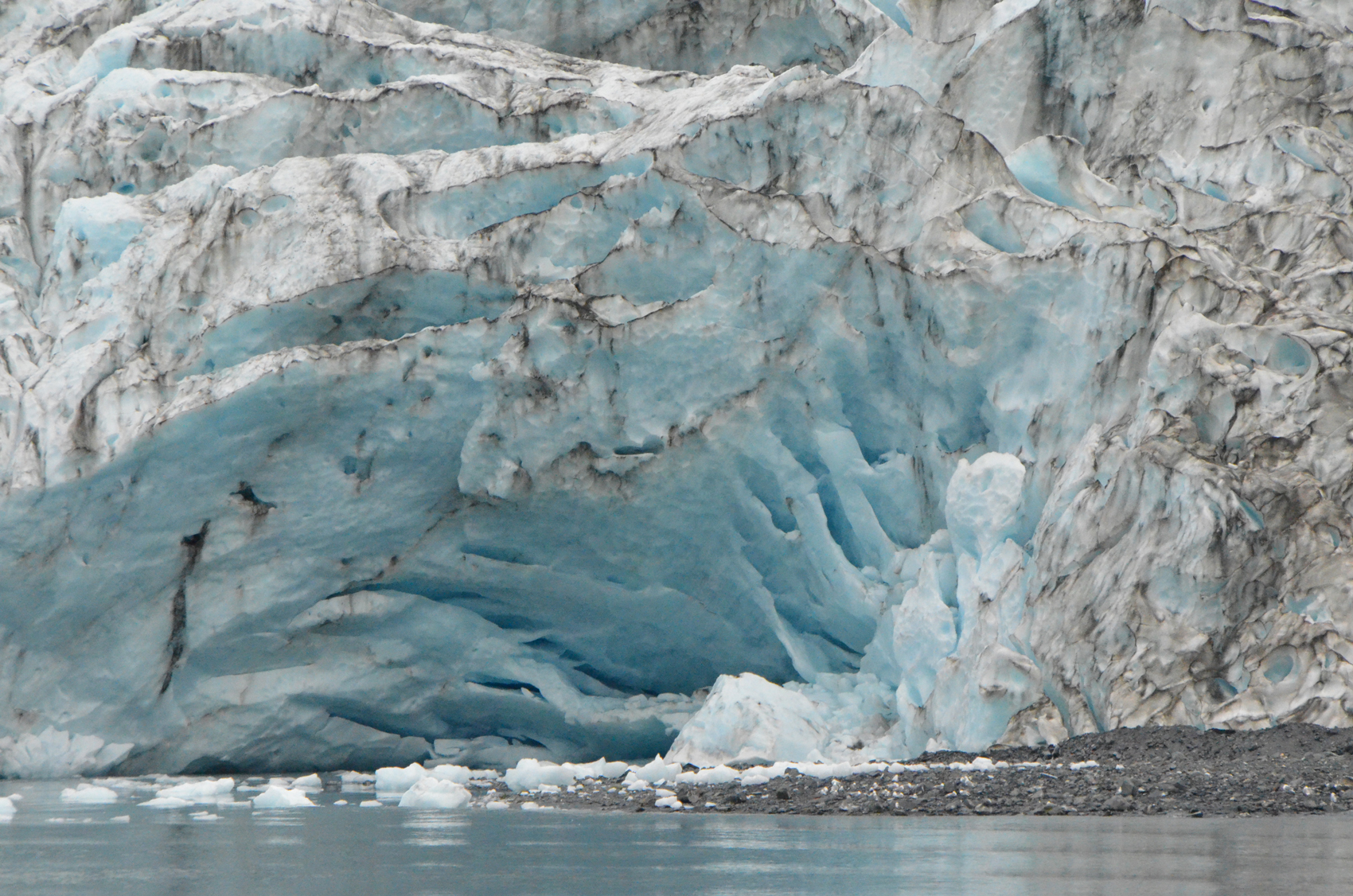 July 21, 2015 – Whittier Alaska, Prince William Sound – Boat tour on Prince William Sound today where Glaciers and waterfalls graced the steep mountain sides and wide open waters were adrift with sea otters.  We watched a whale, many sea lions, and even spotted a couple of mountain goats.  The sky was a bit gray most of the day but no rain, and it cleared a bit near the end. 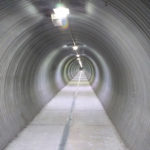 Whittier is squeezed into a narrow triangle of flat land at the base of a steep cut in the side of the mountain.  There isn’t much flat space and the railroad cuts this in two.  As you enter town, one street provides access to the waterfront and the other takes you into the residential area.  If you are at the other end of town there is a pedestrian tunnel that runs under the width of the railyard.

I had come to town early today so that I could get a shower at the Harbor Master’s Office.  They provided fairly large shower rooms and as much hot water as you could want.  For a flat fee they turned on the water when you paid upstairs, and off when you reported done. 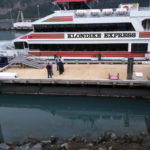 I gathered with the other three or four hundred people who were heading out on today’s cruise of Prince William Sound.  No worries about rushing onboard as they have assigned seating at tables.  On the way out they serve Fish and Chips at your table.  I was seated with three Asian girls.  They were quite interested to hear about my trip and see pictures.  They had a few stories of their own.  After lunch I left the table and spent most of the trip out on deck.

The high speed catamaran’s cruising speed was on the order of 40 knots, which is really fast on the water.  They close off the front of the boat when underway because the wind is really too much, but open this up when they slow down at various destinations. Right next to the bridge there are small walkways where a couple people can gather and brave the wind, but no one really stayed there long.  Otherwise the upper and rear decks provide plenty of less windy alternatives to see the sights as we’re underway.  I believe we covered some 125 miles on our day.  Here’s an overview map of the trip based on my GPS track. 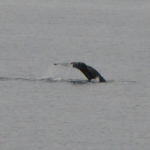 Early on we spotted a whale, and as we got closer it dove deep.  You see the tail fluke come up out of the water and down they go.  Since this usually means they won’t be visible for as much as another ten or fifteen minutes we moved on.  Very soon we passed a small rocky island with sea lions lounging about.  From here we turned down a narrow passage between two islands.  This was fun just because it wasn’t open water, and we saw a few bald eagles in the trees.  But the main attraction was the towering mountains rising high on both sides. 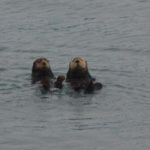 Glaciers cling to mountain sides everywhere, some of the larger named, many not.  Down College Fjord where the Glaciers are named for East Coast Colleges, here we started seeing many sea otters drifting on the water.  All busy eating or cleaning their fur.

Down Barry arm we came to Harriman Fjoird and Surprise inlet.  The story goes that John Muir joined the 1899 Harriman Expedition, a two month survey of the Alaskan coast.  Their ship came into Barry Arm and the maps showed it a dead end with Glaciers filling the end.  Muir asked to be allowed to take the ships small boat to look around the corner, and “surprise” there was an undiscovered Fjord.  The took the ship into the Fjord and named it Harriman for the expedition’s founder, and the scenic glacier there “Surprise”. 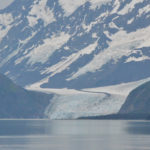 We stayed by Surprise glacier for a while watching for calving ice, and observing the harbor seals pulled out on the ice.  We then moved back up the Fjord to take a closer look at the Glaciers we had just passed.  We spotted a group of kayakers who were camped on the shore.  Their kayaks gear and kitchen in one spot and tents much further down the shore.  A good precaution in bear country. 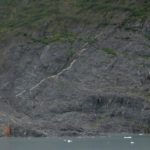 The Glacier here had uncovered much solid bedrock recently and there hadn’t been time for plants to take hold.  On the large expanse you could see a long wide seam of white quartz that had been interjected into a crack running jagged across the face of the solid mountain.  Above the bare rock low bushes and small trees had hold.  At the edge of one of these perched on the steep mountainside we could just make out a pair of mountain goats.  The captain had strong field glasses and reported that indeed they were goats and not sheep, but we were hard pressed to tell ourselves. 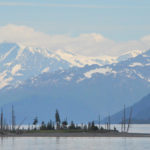 While the walls of these fjords are very steep and drop into the water abruptly, the valley is typically U shaped rather than a steep chiseled V.  This is because these valleys were carved by glaciers.  Ice tends to carve a U whereas water carves a sharp V.  As we navigated the Fjords here and in Kenai Fjords the bottom often presents unusual shallow places.  Long bars of rock rise up from the bottom like submerged piers.  They are moraines, rock piles, left behind by glaciers past.  As rocks fall from mountain sides onto the top of a glacier this debris is carried along and deposited in piles either on the sides or at the end of the glacier.  We passed several of these where the boat slowed to navigate safely.  One was exposed and had a few small trees growing on it. 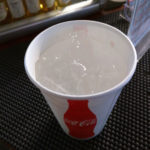 As with the previous trip the crew brought ice aboard, and being that they had a bar on-board, they had soda water.  So I had soda water with thousands-of-years-old glacier ice.   Before we returned to Whittier we visited a very large Kittiwake nesting area nearby.  The cliffs were white with the birds and the air swirling with them.  This was one of those times when one thinks better of looking upward.

Whittier, Alaska Marie Highway terminal with Begich Towers in the background. In between lies a large railyard, to get there requires walking through a pedestrian tunnel.

Inside the pedestrian tunnel. Quite nice.

Gathering place for the cruise.

Klondike Explorer is our transportation today.

Looking out from a window table.

Tables are set with groups of four. Mix and match for groups who aren’t exactly four.

These young ladies were seated at my table. We had a nice conversation.

I believe an Oyster Catcher. Not a great pic, but they called it out and I had seen them elsewhere.

Easier to see… and hear, the sea lions.

Navigating along the narrow passage that separates Esther island from the mainland.

Eagles along the shore.

Back to College Fjord

Closer look at the glaciers

We spotted this whale

Closer zoom on the fluke.

The lines on the glacier are rock deposited along the side of the tributary glaciers above.

Harbor seals pulled up on the ice.

Me in front of the Glacier.

Her phone’s memory was full so I said I’d take a photo and post it here.

Notice the dining flys the beach

Closeup, you can see their boats too.

Their tents are much further down the shore.

Heading out of the area, intersting reflections.

Glacier Ice retrieved by the crew.

Glacier Ice in my soda water.

A moraine in the middle of the waterway. Happily the tides have left a channel for us to pass.

The Coast Guard was out patroling.

Whittier is perched on a bit of land up against these mountains.

Portage Valley and Whittier Tunnel
Next