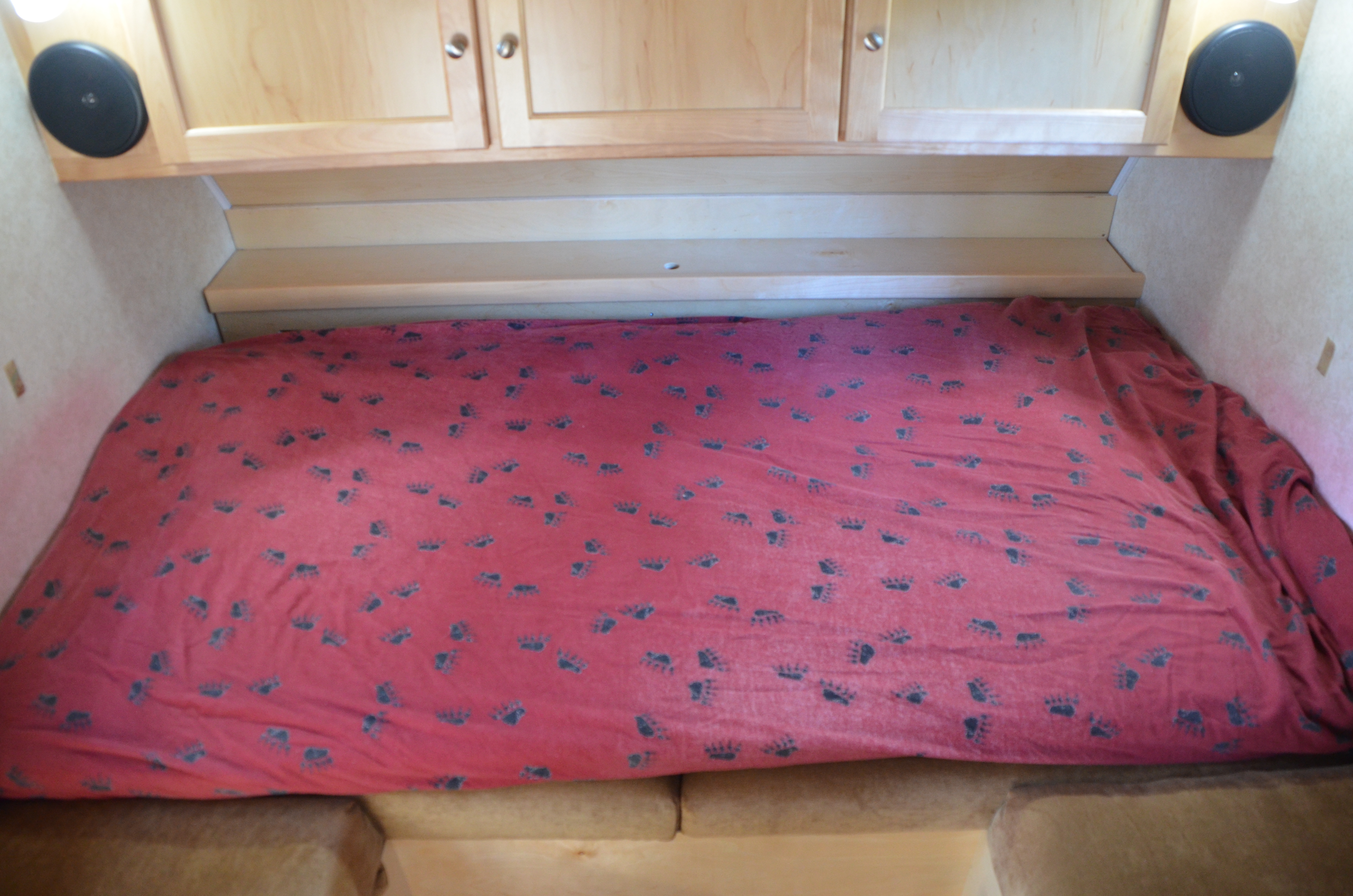 Being just one person and short enough to fit sideways, I found that I could just lay down the back of the rear couch to sleep.  Wall to wall is about 72″ and I am about 67″, this leaves a little room above my head and below my feet.  I further found that if I laid a twin sized memory foam mattress topper that it really made this quite comfy.  With the mattress topper in place, I put a flannel sheet over it, and a flannel top sheet and a comforter.  This made a bed just like home.

This also meant that I could leave the table behind, since I wouldn’t need it for making up a bed.  Without the table the whole unit feels so much more open.  I did bring a small table, but not the one that came with the unit.

The alternative would have been to set up the full bed, and probably do this after winding down for the night, then reverse the process in the morning.  To set up the (70″x73″ according to literature, 72″x72″ by my measurement) bed in the Q model you lay the back of the rear couch down first.  This requires removing the two end cushions so that the seat back can fold forward, unlatch and then push it back past its upright position and down flat. Then put the table in the lowered position and set it between the benches.  Next you remove the cushions from the two side benches and lay them flat.  The back and seat sections are held together by a couple pieces of seat cover material which makes this part pretty easy.  When each side is laid flat it fills half this part of the bed.

I plan to do some experimenting to see if the place of the table could be taken by several boards, maybe with some kind of metal hanger at each end.  They would need to be pretty sturdy though, as this is where you enter the bed, so where you put most of your weight in the smallest area.  But boards would be much easier to store, and they would give me an option for the bigger bed without having to drag the table around.  But this isn’t a high priority at this point.

The U shaped seating area with all cushions, no table.

Table in down position ready for conversion to bed (although you probably want to lay the back of the couch down first.

This is how the stock table fills the space for the bed.

Note that to lay the couch flat, you have to lean it forward first. This means moving the two end cushions out of the way.

End cushions against the wall. Easiest place to store them.

Mattress topper on top of rear bench. Note that the width here is about 73″, but a twin bed is more like 75″, so the end rolls up a bit. I put this by my head and it became a natural bit of pillow.

And with a fitted sheet on the mattress topper. I used a flannel top sheet, a light blanket and a comforter on top of this.

CPAP – Off Grid
Next

Something You Aren’t Doing…