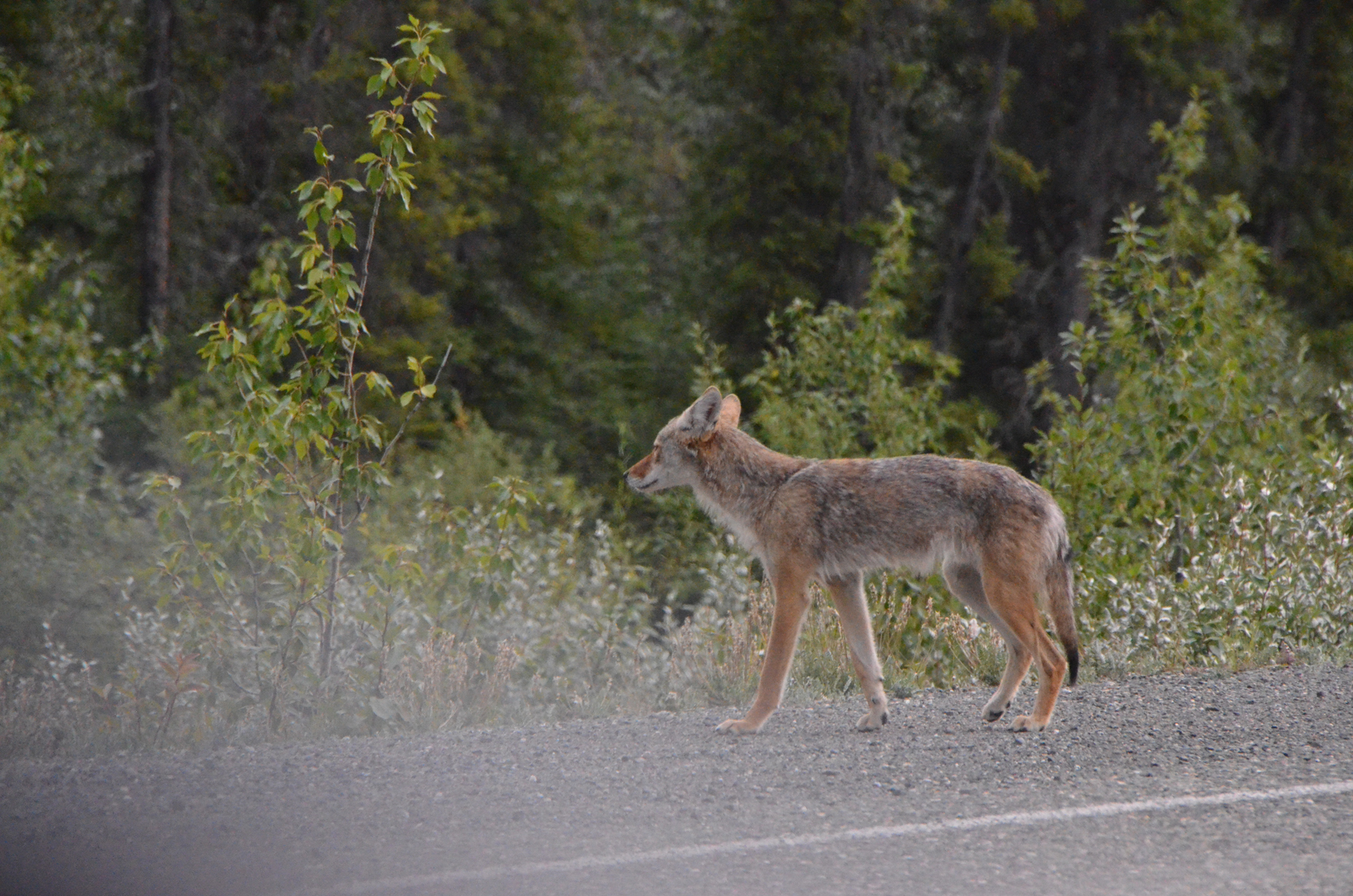 July 27, 2015 – Alaska Highway, Kluane Lake Yukon Territory – Remember that low tire from ten days ago?  Its back.  The tire and a border crossing made this a long day, but it was only five hours of driving.  Spotted a coyote along the road and another variety of “cotton grass”.

I woke up, made a nice breakfast and headed out to put get the trailer ready for travel when I spotted the tire.  Not just low this time, completely flat, off the bead, wouldn’t take air.  Clearly the slow leak was bigger now, although still a slow leak since it had taken over night to get this far.

Yep, call it luck.  This was the first time I’d had to park on soft ground, and with a significant slope.  I got the spare dropped down, something you do from inside the car, so better done before you’ve jacked it up.  Then I started raising the axle.  Tires blocked with some soggy firewood from an adjacent site, it seemed like it would be pretty stable after all.  I got the axle about two inches up when I heard a loud hollow pop!

The tire had retaken its round shape with a snap.  So, while I was laying there on the ground, I wondered if perhaps…?  Well worth a try anyhow.  I got up and pulled the trusty little compressor back out, hooked it up and started adding air to the tire.  The bead was well enough set that it held air and was back to running condition in a few minutes.  So now to find a place to try to get it fixed, and hope that the third time doing so would be a charm.

Not far down the highway was my first stop of the day anyhow.  The Canadian border station as I entered Yukon Territory.  There were a couple of vehicles ahead of me, and they didn’t take long, but each of them pulled to the side after they left the booth and the driver got out.  The first was a truck with a camper on the back and the driver went in and came out with what looked like a partial carton of eggs.  I didn’t see until later that the next car did the same.  Coincidentally, the eggs I had been carrying all over Alaska, and which had probably originated in Canada, just happened to have been used up in my breakfast today.  So sure enough they were most interested in whether I had eggs, and I was able to say that no I didn’t have any on board. 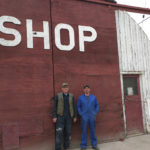 Just down the road is Beaver Creek, and I had hopes that somewhere I would find a shop that could repair the tire without too much delay.  I had learned that these towns are pretty small so the first place I spotted I pulled over.  The folks at “Far West” were very friendly and happy to help.  It turned out the leak was an easy find, now that it had opened up a bit, so the fix was quick and simple.  We shared a few stories and I was away.  Tonight I’ll wrap up the little air pump neatly and stow it away again. 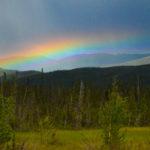 Back in the interior of Alaska the road is pretty flat, enough small grades and turns to make things interesting, but easy enough on the Jeep.  One stretch of road had a number of small drainages crossing from right to left and so the road had a series of semi-regular shallow dips over five miles or so.  Each one had a small bridge at the crossing.  As I came upon one of these and the road in the dip came into view I spotted something in the road.  I slowed to have a look as it trotted from the left side of the road into my lane.  I had also looked behind me and saw the road was clear as far as the eye could see, so I came to a stop and pulled out the camera (flashers on anyhow).  Ahead a coyote made his way into the brush at the right side and stood for a moment.  Then he came back out onto the road and started sniffing where he had been originally.  A couple of sniffs and he started my way along the shoulder.  When closer he slowed and shook his head, ears flopping back and forth, then trotted over the embankment.

I wasn’t far from my night’s destination along Kluane lake.  As I was pulling in I spotted a huge expanse of another type of cotton grass that had gone to seed.  I’m told there are more than a dozen types in Alaska.  They remind me of the seed pod stage of the mountain anemone, which when I was in my teens held my fascination as I was hiking in the cascades.  It reminded my of Dr. Seuss’s “Truffula Trees”.  In the end the day was a good one, and was capped off by a vibrant rainbow.

Got me on the road again in short order. Thanks!

Coyote lingering on the road

Heading for the woods

Kluane River, just above the lake.

Kluane Lake late in the day. I was actually interested in the dust cloud you can see rising from the highway along the base of the mountain ahead. I had assumed a long stretch of construction, but I never did find anything other than the significant wind and maybe someone pulling off on a shoulder that could have caused this.

In the end the day turned out well, and was capped off by a vibrant rainbow.