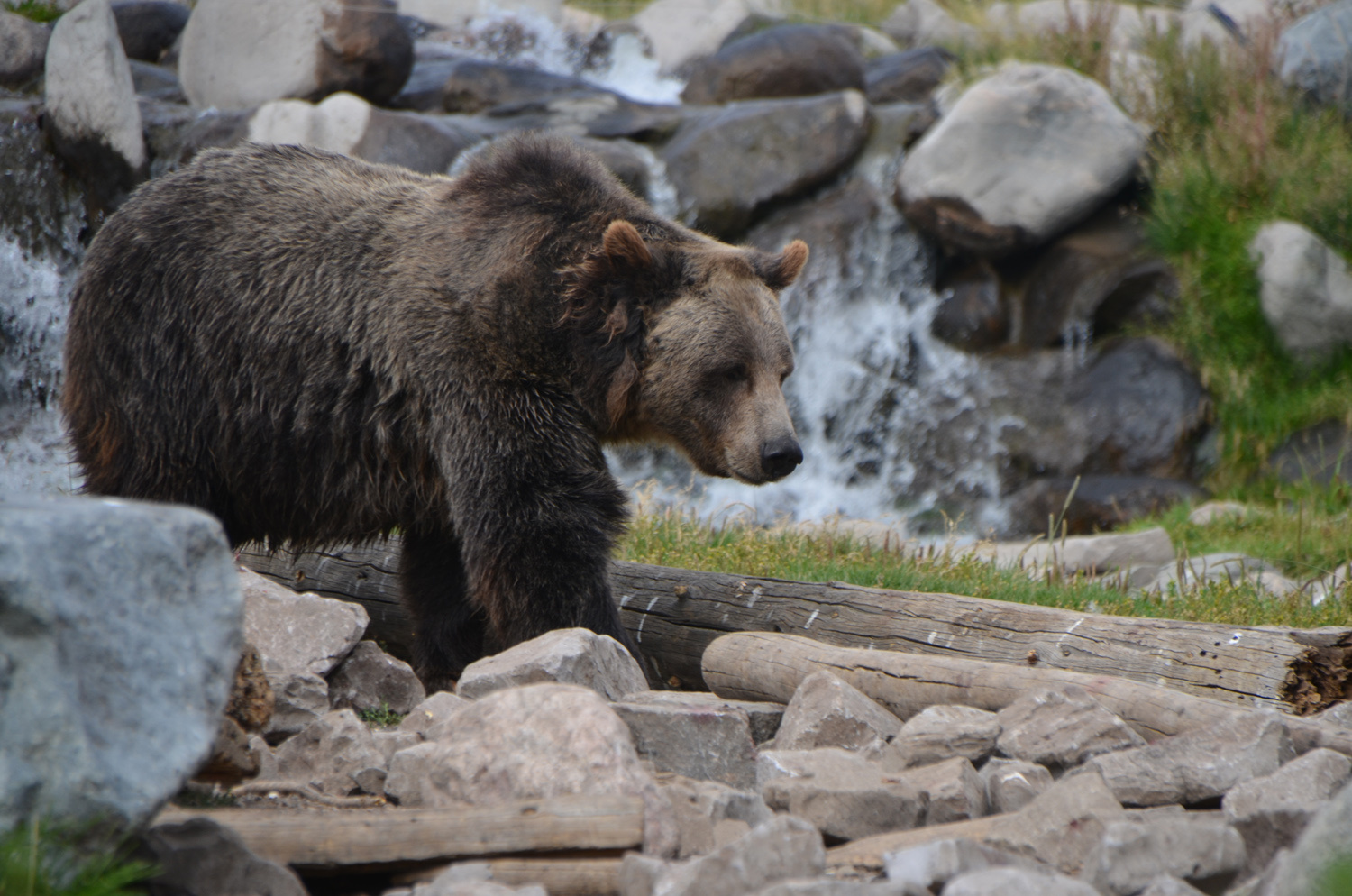 August 26th, 2015 – West Yellowstone, Montana – I arrived in the Yellowstone area early on the 24th.  That day and the next I explored the west side including Old Faithful.  Frustrated by overloaded networks in the park, I took a quick trip back out to West Yellowstone on the 26th.  Suffering similar frustration for the first half of the day there, I needed to get back to vacationing.  So I decided to visit the Grizzly and Wolf Discovery Center to ensure I got to see a Grizzly, even if it wasn’t in the wild.

Anyone can tell you that the road between West Yellowstone and Madison is to be avoided westbound in the morning and eastbound in the evening.  Or at least bring your patience with you for the stop and go traffic going in or out.  To beat this traffic, I had passed through West Yellowstone in early morning on the 24th.  A side task along the way was looking for some internet connectivity.  I really wanted to download a couple of apps for the phone about Yellowstone (geyser predictions) and do some online research about other attractions.  The only place where there was any chance of connectivity was Old Faithful.  Here AT&T’s data network was way overloaded, as was voice, same for any WiFi I could connect to.  From things I overheard it seems that Verizon owns the infrastructure, and leases a small portion of a pretty small pipe to AT&T.  Clearly I wasn’t going to see Internet on the west side unless I headed back out of the park to West Yellowstone.  Long story short, West Yellowstone wasn’t much better. 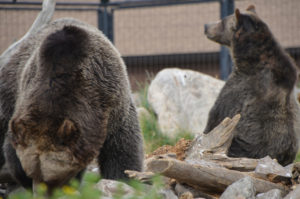 I believe this pair are brother and sister.

The morning consisted of searching for cell connectivity and finally switching to looking for free WiFi.  But I was either not able to connect, stay connected or spent minutes waiting for mobile versions of pages to render.  Now sitting in the car on this hot afternoon, frustrated by this first world problem, I was ready to do something else.  It was then that I looked up and saw the sign for the Grizzly and Wolf Discovery Center.  Having passed through West Yellowstone many times, I knew this place was here, but it was never on our schedule.  I figured that since I hadn’t seen much in the way of Grizzlies in Alaska or Canada, this was a golden opportunity to spend the rest of the afternoon with a guaranteed “sighting”.  It did indeed get my mind off of the first world problem and I got my sighting and some good education.

The center mixes a lot of education into its program.  A clear message is about everyone’s part in keeping wild bears wild. Unfortunately, as we humans encroach on their homes, the bears do what comes naturally, they make use of easy food sources we unwittingly provide.  This behavior put humans in danger.  Which mostly leads to the bears being killed.  So they put a lot of emphasis on how to avoid this situation, whether as a visitor, or a resident in bear territory.  They keep the reasons why each bear is here in the forefront as a reminder that keeping wild bears wild is more our job than theirs.  It was a little easier to see the bears in this situation knowing that the other likely alternative would have been killing them. 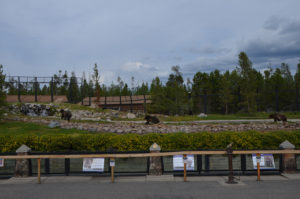 A wide shot of the enclosure, the keepers had just called the bears in. Food is next so they came running.

Indoor exhibits were well laid out, but I didn’t spend much time there or at the well-stocked gift shop.  Outdoors there are several enclosures, the largest being for the bears.  It is a wide meadow area with many large rocks and stream running over a waterfall and into a pool big enough for the bears to swim a bit.  This is sort of an exercise yard, and the bears are rotated through.  On one of the rotations, the keepers had hidden edible treats under rocks and logs and then let them spend some time using their keen sense of smell to dig up the goodies.

The staff was very accessible, friendly and informative.  There was always someone around if you had a question, and you were welcome to listen in as they explained things to others asking their questions.

As part of this demonstration, they had a ten-year-old volunteer wear a ball cap with a teddy bear face on the front and instructed him to behave the way bears would in various stages of interest/aggression.  Then they explained how to respond, and used a training canister to show how and when to use the spray.  I’d say this should be a must see if you come here.  A perfect demonstration for kids and adults alike.

I would recommend coming early in the day, as I believe the wolves like to sleep through the afternoon.  Plus you get the opportunity to see more of their programs. However, since seeing a grizzly in the wild should be a pretty rare experience, I can say this is a good safe bet any time of day.  Bears, wolves, raptors and more.  Good place to bring the family, and let them see these animals that they are unlikely to see in the wild.  Bring your camera, and maybe a pair of binoculars, as there is a tall hedge up front, and so the view from a raised platform a little bit back is most unobstructed.

This bear had just been in the pool

A wide shot of the enclosure, the keepers had just called the bears in. Food is next so they came running.

I believe this pair are brother and sister.

In this shot of the bear running you can clearly see those long claws.

These bears are searching for hidden treats placed by the keepers just prior to the bears being let into the enclosure.

Nice explanation of how to tell wolves and coyotes apart.

The wolves were napping when I was there.