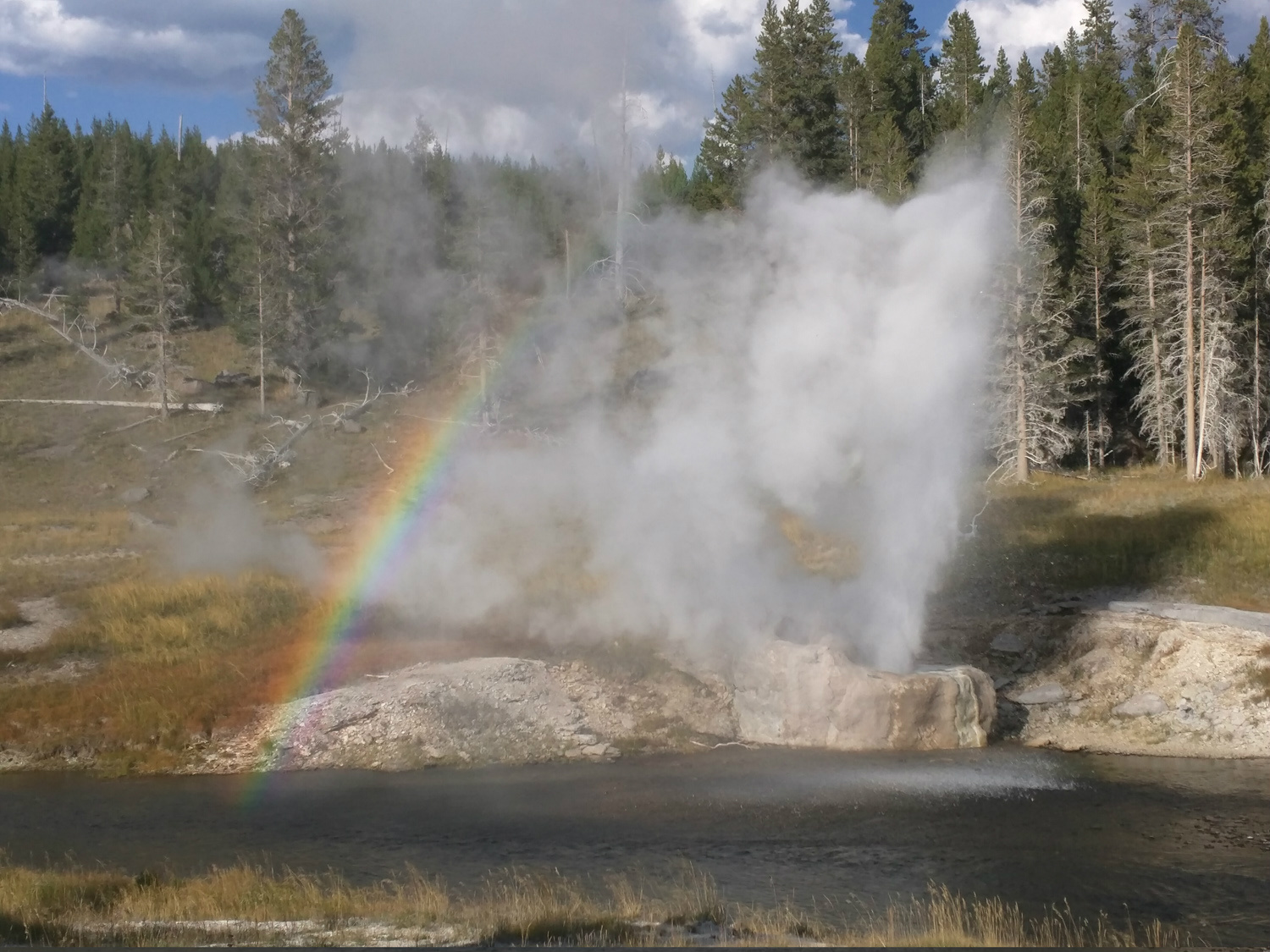 Wandering in Yellowstone there is always something new playing out in front of you.  I love the variety and the complexity.  This trip I spent six days in the park.  For the blog, I have divided it up into five themed posts.  This is number one, “Old Faithful Area”.  It focuses on the upper geyser basin and the Old Faithful Inn.  The other posts are The Tour, Birds, Bison, and Other Animals.

Don’t miss the exhibits in the visitor’s centers, and take the time to at least skim the interpretative signs in the park.  Sometimes you start to hear the same message and you can move on, but having more information can really deepen the experience.  I have been in the Old Faithful/Upper Geyser basin several times in the past and have seen most of the geysers erupt.  So I did a lot of random wandering, and I came back a couple of times.  I like watching Old Faithful from the porch of the Old Faithful Lodge (newer building, not the Inn, and not the Snow Lodge).  I like rocking chairs and they provide them here, although they have a pretty short rock which I think makes them less enjoyable.  Maybe it is an illusion.

One day I had come to see the Geysers early in the morning with fewer people around and I bought a sandwich at the store for a lunch.  I needed something to drink and I wanted something fizzy and getting soda water here was near impossible, so I opted for a “craft soda”.  This was “Old Faithful Root Beer” by Teton Brewing.  Other than using cane sugar there wasn’t much that appeared to have been special, but it was a catchy bottle, sort of. 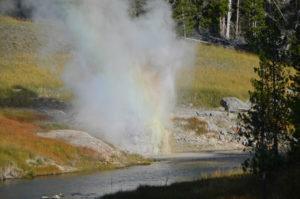 I wanted to see Riverside Geyser erupt so I made sure it was on my schedule to walk all the way down there and sit and wait.  It was entirely worth the time and effort.  In addition to some great pictures I met a couple of folks while I was waiting.  Plus, it was a good walk there and back.  The eruption is preceded by water running out of the cone, but it isn’t clear how long that phase lasts.  Well I didn’t time it but it was much longer than half an hour of a thrill suspense.  But when it started to go it was beautiful, with a blue sky and puffy clouds for a backdrop, the spray played across the river as it fell, and the steam never went quite the same way.  Huge bursts would rain down mist and the sun would form a rainbow in the mist.  It lasted a long while, so lots of pictures, and a chance to move around a little bit in the later stages. 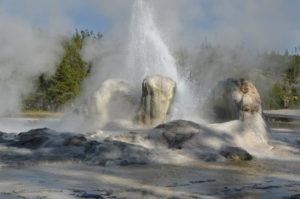 As I passed by Grotto Geyser, it had been erupting low but constantly, a behavior that is only seen occasionally.  Apparently Spa Geyser next door erupts when this phase is active, and I saw a couple of these rare events.  I got time to catch many great shots of Grotto, and a shot or two as Spa would unexpectedly shot off a jet every minute or ten.  It was quite the game. 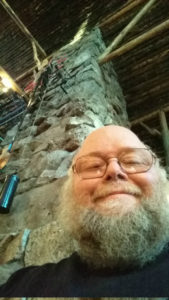 After my long walk I headed to the Inn.  I really like the architecture, and just sitting in the lobby is quite nice.  I wanted to have dinner, didn’t have reservations, but I was willing to wait.  I have had dinner here before, but it won’t ever be quite the same as the time (1996) that I was there with my son William and his mother Kim.  The star that time was the six-year-old with the manners and tastes of an adult, and the waiter who mistakenly skipped offering pepper on his salad.  We saved the day before the waiter left and William got pepper on his salad, and the server was both impressed and most apologetic.  The parents both quite proud of this fine young gentleman.  (still are) 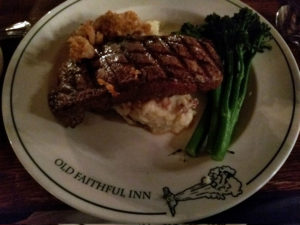 Alas there was no offer of pepper this time, and most of the guests were having the buffet.  The tables were a lot more crowded together than before and the lighting was particularly dim as you can see of the food pics.  The waitress did know what soda water was, and always brought a new lime.  But I did have to get her attention and ask each time I wanted a refill.  I drank plenty as I had been walking in the sun all afternoon.  I enjoyed dinner, but it wasn’t the five-star experience it once might have been.  Dinner came with a fiberglass-ish cover that reminded me of a hospital rather than a restaurant, plenty practical.  I might have had the buffet but I was carrying my Nikon camera, and I didn’t want to either carry it through the line, or leave it behind.

The waitress was a bit more engaged near the end of the meal, when she actually came around to the other side of the table rather than standing almost behind me as she had prior.  I was thinking about ordering the “Summer Berry Stack” because it has this word “stack” in its name that really isn’t very flattering and shouldn’t be anywhere on a menu unless it has to do with pancakes.  She suggested that the Yellowstone Sundae was at least as good and in her opinion a better choice.

Welcome to the park

Digital Signage for Geyser predictions. There are good apps for this, but download before you get to the park and consider one that caches predictions so you can have them at hand when the network is clogged or just not in range.

Good old fashioned printing too. Given that network was so clogged it was nice to have this kind of thing to refer to.

Evidence suggests that the hot spot under Yellowstone has remained stationary as the North American plate moves to the South and West. Not quickly by any means.

Rocking Chair from which to watch Old Faithful. (at the Lodge)

Old Faithful from the Rocking Chair

More recylable without the potential for a mess like glass.

Castle Geyser, note the colors in the runoff

What lives in that water depends on the temperature.

Plenty of pleasant walking on boardwalks.

Rainbows were showing up in the spray

In the runoff of a wide are of thermal features.

Clock on the face of the chimney

Desert menu – Note to menu creators, the word stack should only be used in conjunction with pancakes.

One Response to Yellowstone (1 of 5) – Old Faithful Area

West Yellowstone – Finally a Grizzly?
Next