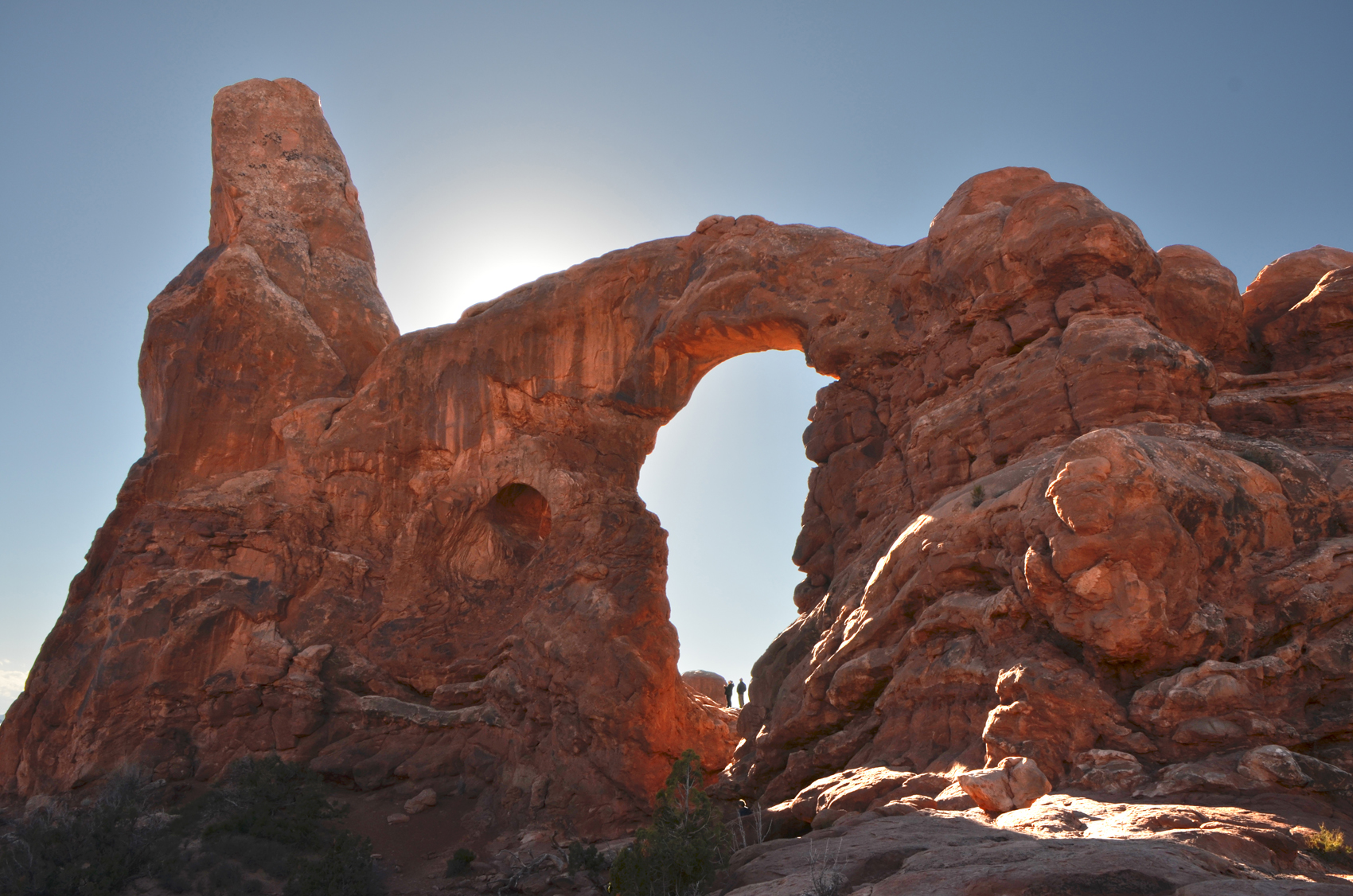 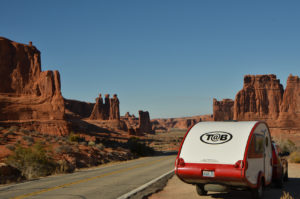 November 27, 2015 – Arches National Park, Utah – Red rock wonderland.  Stare at the rocks and let your imagination run wild.  Smooth vertical walls, columns, balanced rocks, grottos, potholes, arches and more.  This was a quick visit as I passed through the area heading south, but I was happy to have hit most of the high spots. 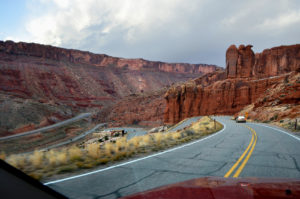 Just inside the entrance to Arches National Park is the visitor’s center.  Head inside for some info, a video and some interactive displays.  Make sure you are topped up on water before you head on into the park.  I found that the tour from the car was pretty good, and with a couple of short hikes I think I made the most of a quick visit. 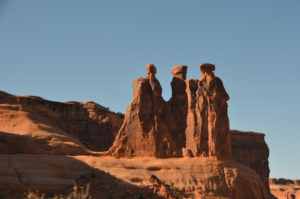 From the visitor’s center the road does a quick switchback and climbs along the sheer red rock wall.  Shortly after you reach the top of the plateau you will see the three gossips.  This early part of the road is packed with things to see, and I think I would plan a stop here next time around and walk the Park Avenue trail at least. 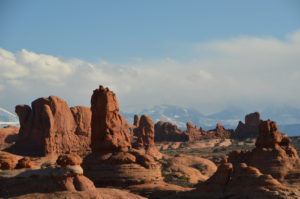 Away in the distance the mountain ranges were capped with newly fallen snow, while down here it was warm in the sun, and cool in the shade.  The wind was light and the sky blue with only the occasional wispy cloud. 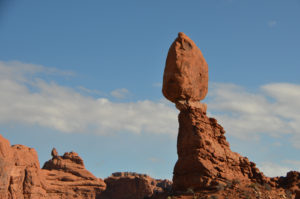 I paused briefly near Balanced Rock, but parking was a bit tight with the trailer.  Taking the right hand turn I headed east through the Garden of Eden, pausing to watch some rock climbers, then out to the parking area near double arch.  Most of the parking was head in angle parking, and by the time I had gone 90% around the loop I was thinking I wasn’t going to be able to stop.  But as I came around the end there was a wide shoulder that appeared to be overflow parking. 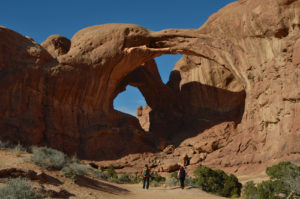 I took the trail over to Double Arch, which had a little bit of construction going on.  I guess I shouldn’t have been surprised to see the crushed red sandstone underfoot, but it was that same brilliant red.  I wasn’t quite sure what the etiquette was for walking under an arch, but it seemed like they weren’t actually encouraging it.  I had read in the visitor’s center that the erosion process is constant, and they showed a couple of pictures of a well known arch that collapsed in 2008 and I decided to err on the cautious side.  So I took my photos from right up front, but didn’t go under.  Later I read a sign that seemed to invite you to walk under while at least watching for possible falling rocks.  The Double Arch trail is about a half mile round trip and relatively flat. 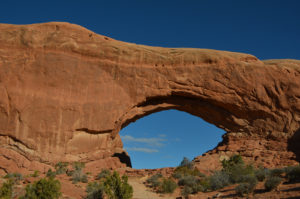 Back through the parking lot I then hiked over to the window arches.  These arches reminded me of the star trek episode where they jumped through the window into different times.  North window is visible as you climb the trail from the parking lot, then another trail takes you around the corner further down this rock fin. The trail is more level here and the distant snow covered mountains line up with the nearer rock formations for an interesting contrast. 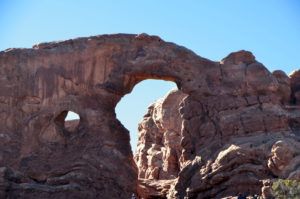 Back towards the parking lot the trail forks off to Turret Arch.  The view of Double arch had been looking north, lit by sun at my back, and deep blue sky shown through its roof.  The view of the window arches had been looking east, so they were lit with low sun and again deep blue sky behind.  But I was seeing Turret Arch looking West, directly into the sun.  This made for some spectacular backlit views.  This trail is about a mile with stairs and a little bit of incline. 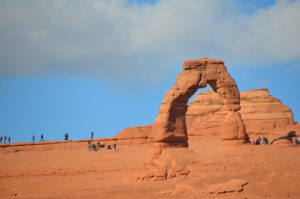 Back to the car, I headed out to see Delicate Arch.  I had learned that the hike to Delicate Arch was a bit too long for today (3 miles – classified strenuous), but I did hike up to the lower viewpoint, about a quarter mile climb that ends at a steep canyon.  If you have a long lens or strong pair of binoculars you can get a pretty similar view of the arch from a spot on the level with the parking lot only 100 yards from the car.  From this angle the arch appears to be sitting on a tilted but perfectly flat surface.

From here I headed out of the park and continued south. In the nearby town I had an interesting conversation with a lady working the counter at the local convenience store.  She was feeling a bit upset about the celebration of Thanksgiving, because of the way that Native Americans were portrayed and had been historically treated.  Empathizing with her I offered an ear and a smile which she seemed to appreciate. 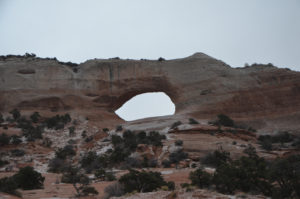 Heading south the road climbs gently over some mountains, and it seems I was driving into a system that was dropping snow.  As I climbed, the temperature dropped and the snow started falling.  Not sticking to the road at first, but it was making the surrounding hills and rocks white.  I pulled over at a wayside near an arch that was across the road on a hill and snapped a couple of pictures.  Some people had pulled over heading north and were climbing up to the arch and throwing snowballs at each other. 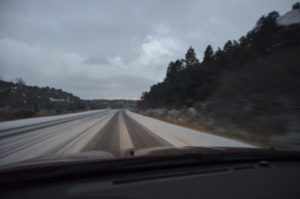 As the light was fading, the temperature finally dropped low enough and the road cold enough that slushy snow started accumulating outside the tire tracks.  At the worst of it, there was a little accumulation of slush in the tracks, but then the snow stopped, and the road started dropping back into warmer air.   I ended up staying in Bluff for the night, pulling in well after dark.

Just after the climb up from the visitor’s center.

Three gossips in the distance, with the trailer in the foreground

Balanced rock. Note the snow capped mountains in the distance.

Not the only balanced rock around.

Arches from the sides meet pothole from above.

One way loop, counter clockwise. I finally found parking after passing by the last “parking lot”

Sign challenges you to let your imagination run wild with the rock formations.

Look for people under the arch for scale.

Red sand on the trail was just asking to be touched.

People on trail in foreground, and people in shadow on arch. It’s big…

Best attempt to get the ground without people in the shot.

Sky through the arches.

Closer look at the arch.

Norht and South Window arches are in the same “Fin”.

All I could think when I saw this was “It’s a Trap!”

Snow in them thar’ hills.

From turret arch looking at Parade of Elephants and Double Arch. The Trailer is parked behind a low rise that forms the middle of the loop, and not visible.

Panned to the right a little from the climber’s column. This is “Garden of Eden”

A quarter mile of this kind of climb to upper viewpoint.

View from Upper Viewpoint. Still could use binoculars.

Snow starting to accumulate at this arch along side the road. There was just enough snow to make a snowball or two for some folks stopped across the road.

Snow is a fallin’

Starting to stick in the lane.