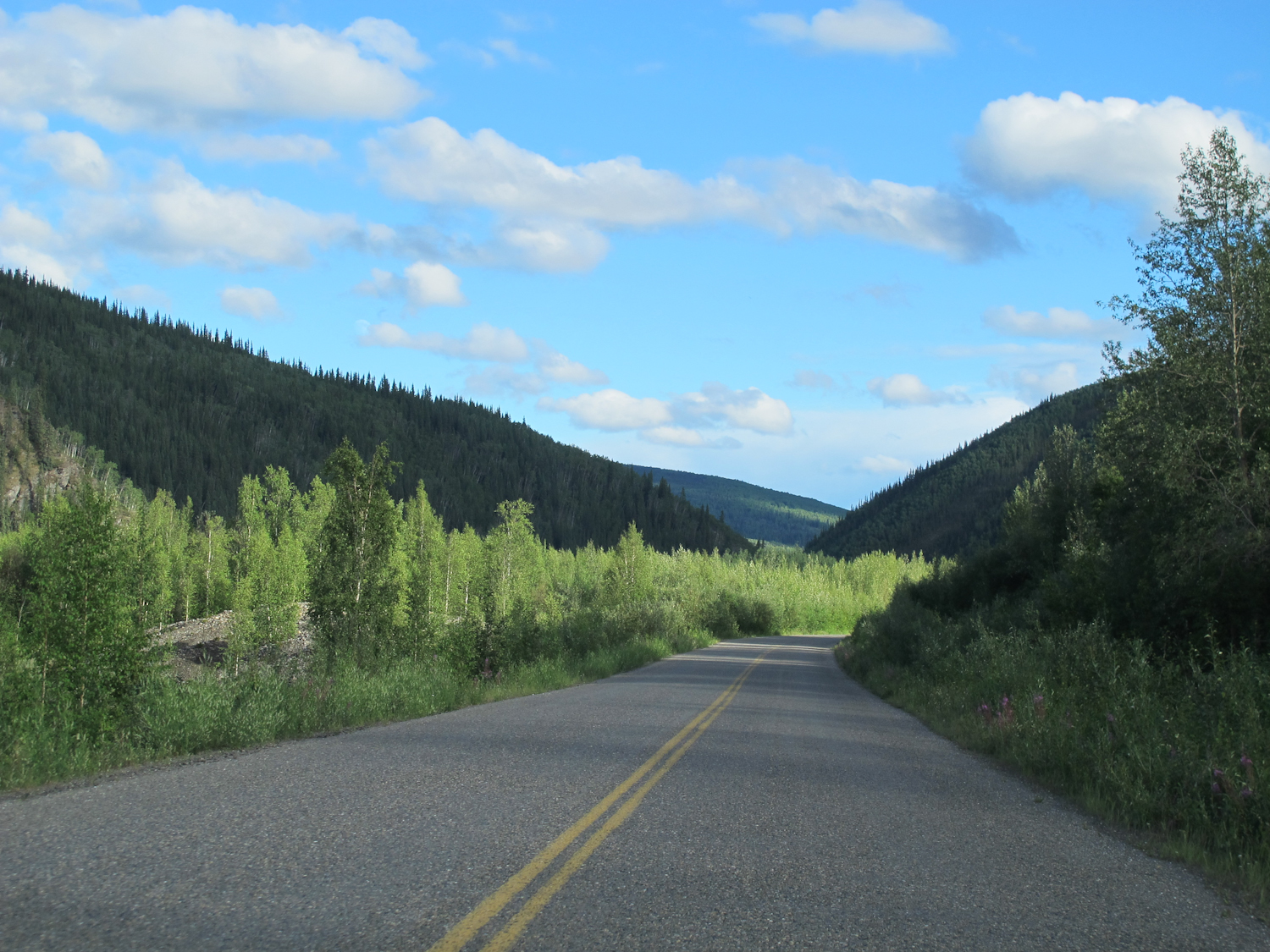 June 26, 2015 – Klondike Area, Yukon Territory – I heard today would be wet and rainy, and I knew that my next day heading north was unpaved and noted for sweeping views.  So I arranged to stay a third night in Dawson City and spent the afternoon driving the dirt mining roads to the south of the Klondike river east of Dawson City.  Similar to logging roads in my Western Washington home, I dodged potholes and navigated random roads. The idea was to explore, wander a bit and try not to stay so “found” all the time.  A little excitement and suspense under dark clouds in unfamiliar forests. 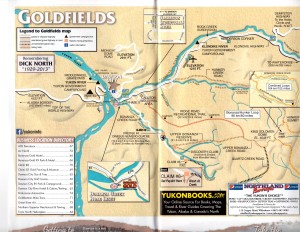 I don’t really recommend you use a tourist brochure as your primary navigation aid, but the GPS gives such a narrow view of things this provided the overview I needed to keep things in context. Plus I wasn’t all about staying “found” today.

I drove up Bonanza creek, the road is paved for a bit, and is a pleasant drive (see featured image above).  There are a few interpretive signs along the way, worth the stop.  About 9 miles up the road is the Dredge #4 Parks Canada site.  I hopped out and took a bunch of photos. There were a few people wandering around, but the tours were done for the day and that crowd had moved on.  There were still a few people around, but I wasn’t pulling the trailer, so I was just another guy with a camera.  I arrived at a break in the weather, and got a bit of sun for a few minutes, but dark clouds were telling me not to venture too far from the car.

From here I continued up to Claim #6, where you can get a bucket of dirt and wash in the nearby creek (up to three days per year).  I was a little late to do any gold panning and didn’t have equipment anyhow but I wanted to see it for future reference. By now the rain had arrived and the road was just getting damp.  I was using a brochure as my only real guidance.  I figured that I wouldn’t drive further than a half tank out, and I had five gallons of fuel extra on board.  But in the end I hardly scratched my range.  I had a pretty late start.

I backtracked a few miles to the upper Bonanza road that climbs up to King Solomon Dome.  Here I got a pretty nice view even though the weather was less than cooperative.  I chose not to drive out to Granville as it was getting late, so I stayed up on the ridge to Hunker Summit.  By now the real rain had moved in and the potholes were full of water and the occasional stream was washing down the ruts in the road.  As the road got wetter it softened up a lot.  The edges of potholes weren’t as sharp, so the ride was smoother.  The Jeep has pretty advanced traction control, and unless you turn it off you don’t get much wheel slip, but I could feel a little sideways slip as the road surface would tilt.  I stopped to have a look at a couple of interpretive signs, but didn’t take the camera out.  Not a lot of folks out here this day, a few folks clearly heading to or from work in their trucks, a few sightseers in their sedans.

I headed down Hunker Creek to complete the loop.  All south of the main road, this loop is about 60 miles, a nice afternoon’s drive if you stop to smell the forest.  When back at the highway I headed away from town a bit to see the airport again and look at the Klondike River Campsite.   I turned around here to avoid tempting myself by looking at the turn off to the Dempster Highway.  I would have liked to have driven to Inuvik and the Northwest Territories, but that’s not in the cards for this trip.

By the time I was back near town the worst of the weather had passed and it was looking much nicer.  I found the road up to Midnight Dome and wandered up there.  Back in Dawson City for a little food.  At the trailer park I spent some time looking over tomorrow’s journey.  I had looked over the George Black Ferry before I went on my drive.  I also made a reservation ahead in Chicken Alaska, not really knowing if this was going to be in short supply like they were here in Dawson City.  FYI: it wasn’t an issue (probably worth at least calling to ask, but here in Canada I didn’t have any voice service, not even with Skype because the bandwidth was so limited), and if I had it to do again, I’d park somewhere along the top of the world highway, and I’d probably drive out to Eagle too.

So, off to bed ready for tomorrow’s travels.

Top of the World Highway