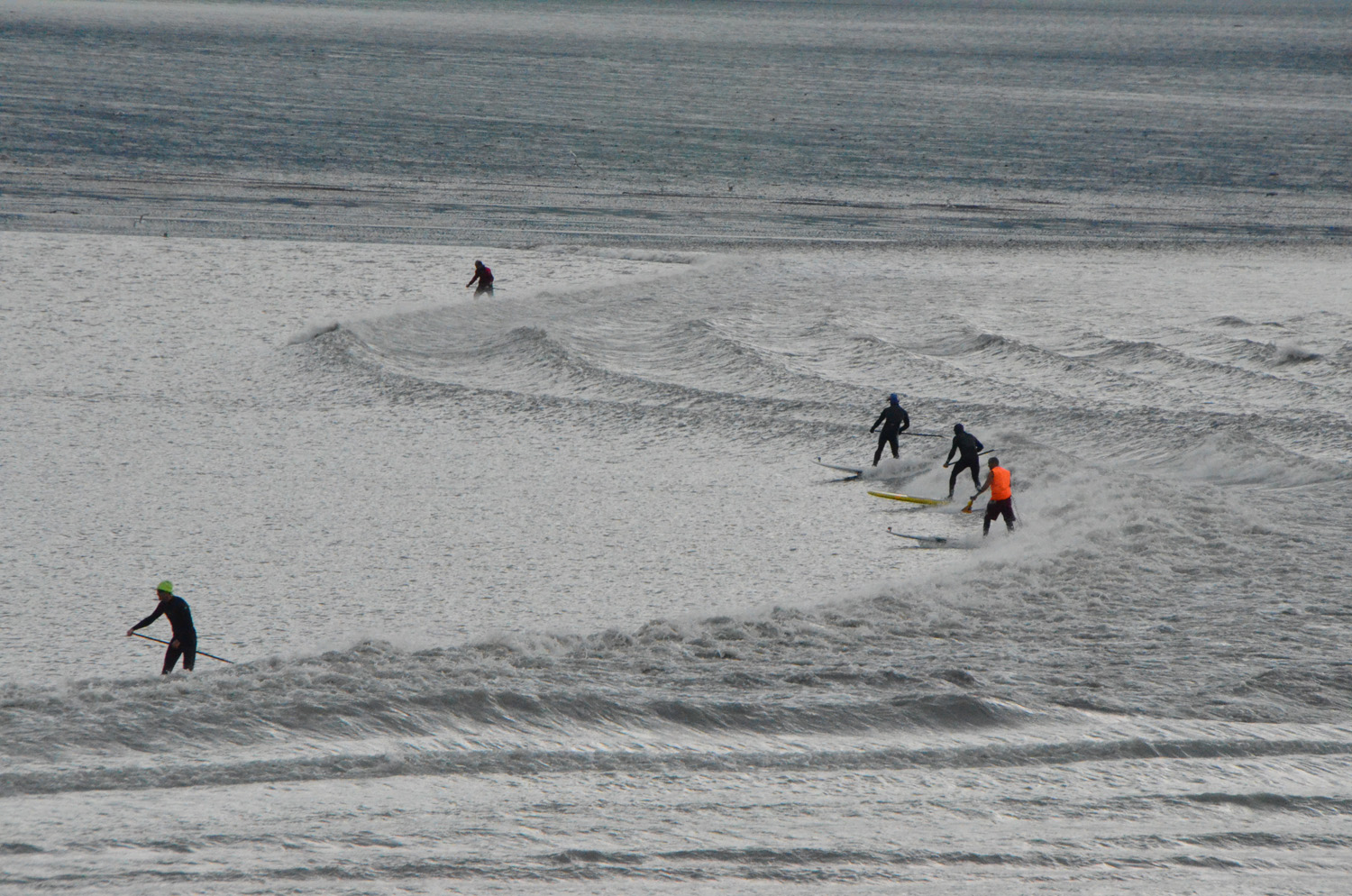 July 15, 2015 – Turnagain Arm, Alaska – Today I watched people surf the wave of a tidal bore.  This wave forms in Turnagain arm when a tall tide is coming in, and today had been forecast to be pretty good.  That meant there were plenty of folks in wet suits waiting all along the way.  The weather was quite dramatic with low clouds and occasional shafts of sunlight between them.

Turnagain arm isn’t the only place where bore tides occur, but it is one of the few.  I will also visit one of the other famous places for a bore tide, the Bay of Fundy, but my timing won’t allow me to see the wave there.  The shallow bottom and the tall tidal changes form the requisite conditions for this natural phenomenon.  Tides in Turnagain arm can vary as much as 40 feet in a six hour period.  Before the 1964 earthquake the bay was actually six feet shallower. 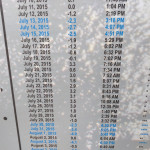 The tidal bore is a single wave of water that moves along the arm as the tide starts coming back in.  Predictions about the timing and size of a bore tide can be made based on tide tables.  The greater the difference between low and high tides the larger the inflow, and the more likely the wave will be big.  So as a sort of extreme sport, folks will ride the wave on boards and kayaks.  Today’s wave was a pretty good example, although I’m told that the heavy westerly wind had knocked it down considerably.  Conversely if the wind had been easterly the wave would have been amplified and could have been as much as six feet high.  Predictions can take into account the tidal difference and the amount of daylight, the wind on the other hand is mostly unknown until shortly before.

The wave travels at about five or six miles per hour from west to east along the 45 miles of the arm, and perhaps half of that distance it is possible to ride the wave on a surfboard.  The Seward highway follows the arm for most of its length, with a lot of pullouts.  This provides a lot of potential access points for surfers and for viewers.  The slow speed of the wave compared to the highway travel speed means you can watch the wave go by, move up the road a bit and watch again, and do this for quite a while.  I found that skipping over a turn out each time allowed me time to get parked and in place for taking pictures, and avoided the crush of those who were doing every stop.

The riders would typically sit at a spot where the channel narrows and paddle to keep on the face of the wave as it approached.  The riders generally wore heavy wet suits and most had ‘sup paddles.  I can’t say if the boards were actually surf models or sup models.

When the channel narrowed, the sides of the wave would start to move faster and form a large crescent.  In a couple of places the bottom rose quickly and the wave fell only to rise again maybe a hundred feet further along.  But there was no way for a rider to cover the distance in time, so this would be the end of their ride.  Even if there wasn’t anyone riding the wave, it is an amazing thing to see.

Notice the mud flats in the middle of the arm. On the far side I could see with binoculars as the wave progressed up the flats. Birds followed the leading edge looking for a meal.

Shaft of sunlight on the mountains.

Wide crescent is formed when the sides start to move faster through the shallower water.

There are actually a few smaller waves behind, but nothing you can ride.

May give you an idea of how tall the wave was.

The wave will travel all the way to the end of this arm.

The wave fell as the bottom rises quickly here. The wave is just starting to build again, and the riders watch wishfully as it continues on.

All the while that I am photographing close in, the scenery all around is changing dramatically.

The wave is on its way again.

I didn’t chase it further