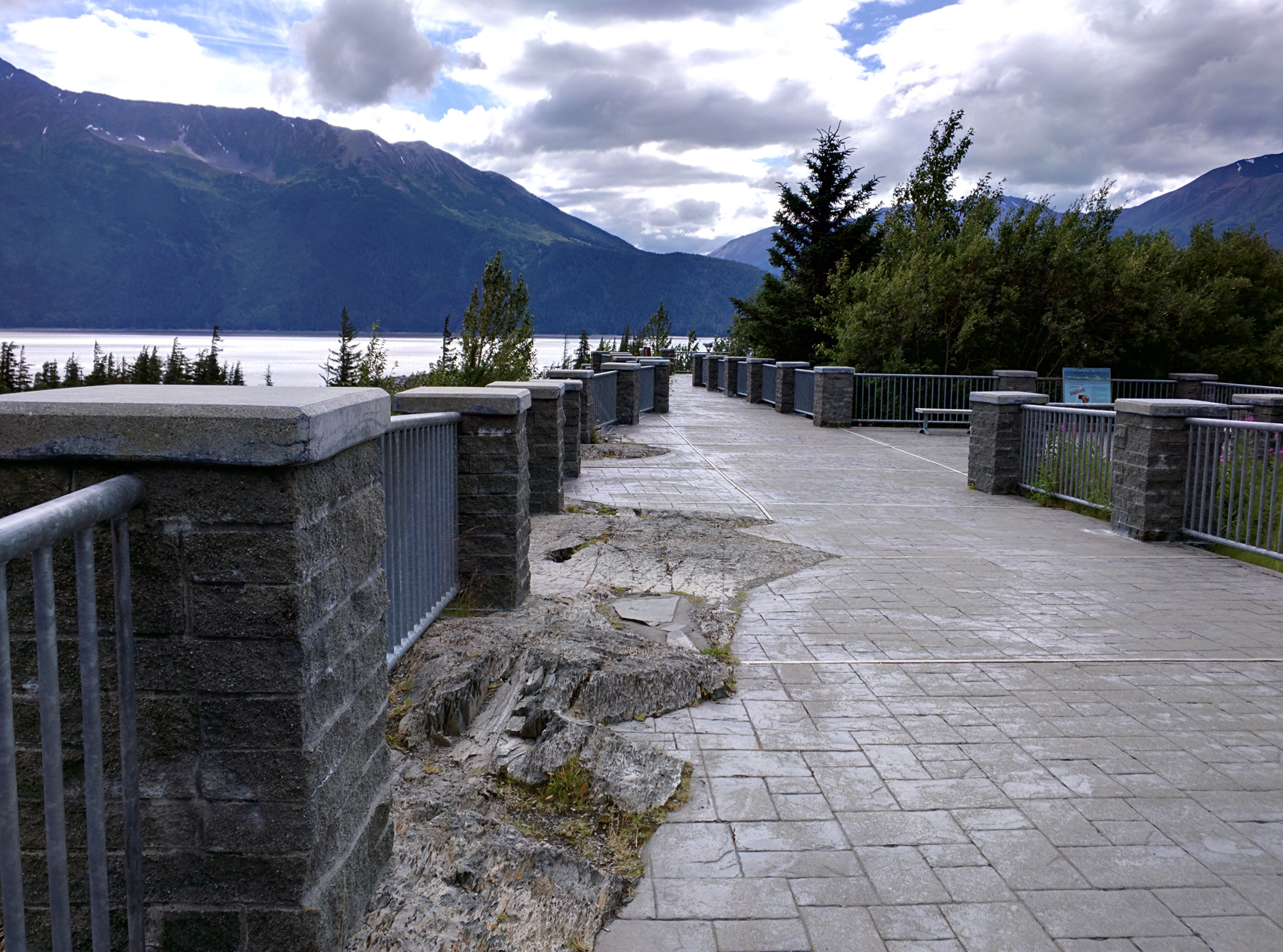 July 14-23, 2015 – Turnagain Arm, Alaska – South out of Anchorage is an amazing drive along Turnagain arm.  Highlights also include train watching, a side trip to see the Alyeska Hotel (and ski area), and Bird Point.  This is the gateway to the Kenai Peninsula, so Seward, Whittier, Homer et al.  It is home to a phenomenon called a “Bore Tide” also, but that is the subject of a later post. 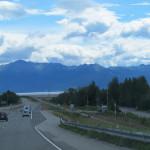 As you head south out of Anchorage you head down a long grade and onto a causeway that crosses a small corner of the waterway.  The area enclosed by the causeway is the Potter Marsh.  From here the road follows the bottom of the cliffs along the edge of the water for thirty plus miles.  This is a nice but windy two lane road.  The speed limit is lower here, and since there isn’t much in the way of passing opportunities they emphasize driving the speed limit.  So sit back and relax and enjoy the scenery, maybe pull out and enjoy the view.  The shoreline is a series of huge bedrock mountains that are capped in snow.  The roadway is carved out of this rock at the tip of most of the points.  If you look at a map of the area, click into a 3D view and have a look at the contrast in contours. 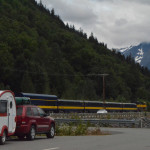 The Alaska Railroad was the original occupant of this route, so both passenger and freight trains can be spotted winding their way along the shore from a distance.   Anchorage to Whittier and/or Seward would make a great trip, and both these destinations offer boat tour opportunities, fishing and many other activities.  The arm divides the mainland from the Kenai Peninsula with tall peaks on both sides of the water.  Smooth sandy tide flats are deceptive.  They look like a nice place for a walk, but two things make that a somewhat dangerous proposition.  The first is that the sand is very fine and is often not a solid place to walk, with quicksand pockets that won’t support your weight.  The second is the onrush of water at the change of tides that flood the flats in a matter of minutes.  The tide moves up the arm at some 30 miles per hour.  Of course this also make boating problematic, since it goes out in quite a hurry as well. 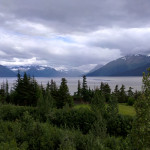 About two thirds of the way down the arm pull out at Bird Point.  The view here is very nice, but competing for the limelight is the stonework of the pathway from which you view it.  I’m told that this is a very popular place for weddings.  They have interpretive displays that explain the bore tide phenomenon, and a chart predicting the best times to see it. 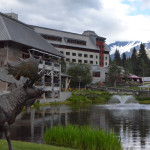 Near the end of the arm is a short detour that is certainly worth the time.  The Alyeska Resort is nestled in a narrow valley surrounded by snow-capped peaks.  The hotel itself is a sight and I’m sure that for downhill skiers it is a great winter destination.  A little pricey for my budget, but I decided I needed to at least see it and get a few pictures.

At the end of the arm the road heads onto the Kenai peninsula, and it also continues in the same general direction into the Portage Valley through a tunnel to Whittier.  More about these destinations in a later post.

At the edge of Anchorage, the road heads along Turnagain arm. To the left here is Potter Marsh.

The road is carved into the base of the mountains, it winds along closely.

Smooth sandy tide flats not a good place to walk or boat.

Spent a night here in the shadow of the rocky cut.

Looking away from Anchorage along the arm.

Sun on the water.

Trailer at a pullout.

Flag on the guardrail for snow removal equipment.

Better view of the cliffs

Looking across the water is the Kenai Peninsula

Top of the Alyeska Ski Hill.

Daisys along the road

Looking back along the walkway

Looking towards the water along the walkway.