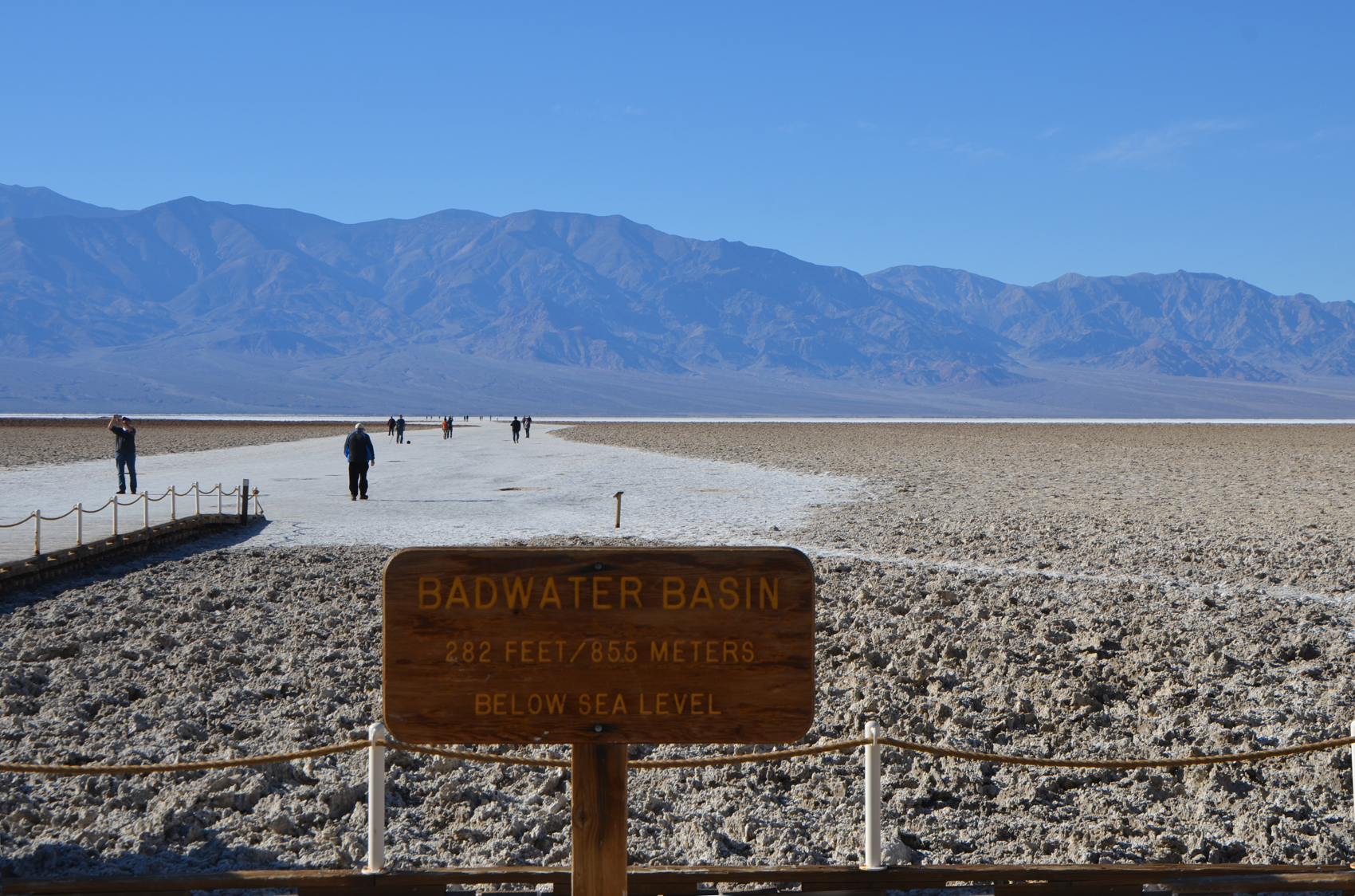 November 29th-December 1st 2015 – Death Valley, California – “Flooding in the Desert!”  Death Valley was inundated by a 1000 year flooding event just five weeks prior to my visit.  One of the visitor’s centers, and many miles of road were closed due to the damage. 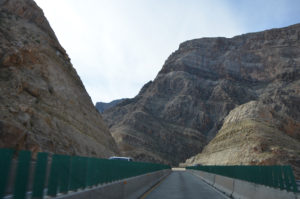 I headed out of Utah through Zion and joined up with Interstate 15 heading southwest towards Las Vegas.  Passing through northern Arizona the road follows some impressive canyons, and here I encountered some pretty major roadwork.  Good news was that I was going against the tide of traffic for the time of day and never really got bogged down. 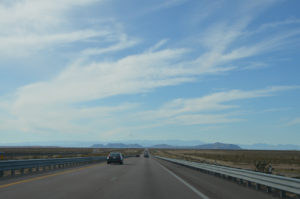 Entering Nevada most of the road is under wide open skies, sometimes there are a few mountains visible in the distance, but more often not.  At Las Vegas I skirted along the north of the city proper and headed west along highway 95 to Amargosa Valley.  Here the route turns south to Death Valley Junction (enters California) and west into the park to Furnace Creek. 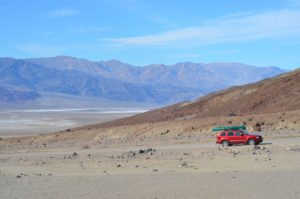 Movies didn’t prepare me for the terrain.  I didn’t expect Death Valley to be a deep spot between two relatively close set mountain ranges.  I had this vision of it being a low point in a wide open flat area with the same view to the horizons that I had all the way across Nevada.  While the valley floor is very flat, there are mountains rising abruptly on the east and west.  To the east the road comes in along a valley floor but still hits 3600 feet, the mountains towering to the left and right.  On the west side, the road reaches almost 5000 feet at a mountain pass.  And so Death Valley feels like part of the mountains rather than the open plains.  (Geology of Death Valley) 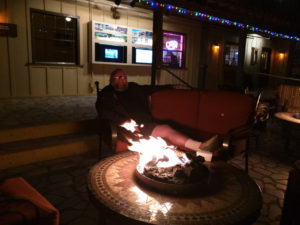 I decided I wanted power while I was staying here, so I went over to the privately owned Furnace Creek Ranch and managed to grab one of the last spots.  I decided to spend a couple of nights here so I would have a whole day to explore.  The RV park has the feel of a residential RV park with a few spots left open for us transient types.  There are cabins and full mobile homes here as well as bigger mobile units with decks and such.  I had dinner at the restaurant here both nights and enjoyed the gas fire pits outside afterwards. 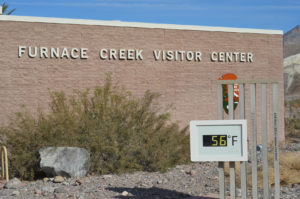 The next day I stopped at the Furnace Creek Visitor’s center to get oriented on what to see.  It was pretty early in the day so the modest 56 degrees was happy, but then we’re almost to December so it stayed pretty comfortable even in the afternoon out on the white salt pan.  Most of the unimproved back roads I wanted to drive on were closed due to the flooding, which is why I had decided on just one day here.  So today’s agenda was a drive down to Badwater, and Artist’s Drive, back up and around to Zabriske point, then up to Dante’s View for sunset. 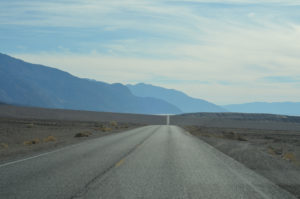 The scale of the valley is hard to measure visually.  The lack of vegetation provides wide open views, but leaves very little to use as a gauge.  Long stretches of road, and perhaps the occasional distant vehicle provide perspective. 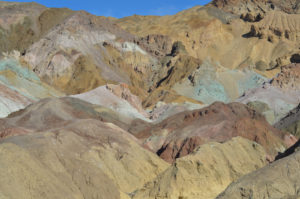 Artist’s drive is a one way side loop that climbs up the alluvial skirt at the base of the mountains.  I stopped and climbed up a small hill to see things up close.  Here I noted the affects of the recent rains.  On the far side of the hill I could see a wide drainage that had all the marks of a recent flow of slit laden water.  Where the water had turned in its course it had left small hillocks of gravel, and here as well as the sides of the watercourse there were bits of green poking through.  The drive climbs up a bit more to a place where variously colored minerals are jumbled seemingly random piles.  From greys, faint greens, to browns and reds, anywhere else these soils would likely be covered by plants of some kind.  But here they remain starkly exposed. 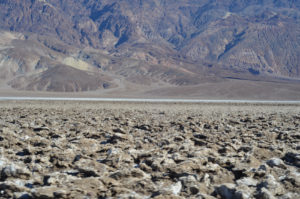 My next side trip was to the devils golf course.  This spur road reaches out into the midst of the flat valley floor where crystallized salts have formed jagged blocks.   It was here that I got my first comment about the canoe on the roof of the car.  Said with a smile “You sir, are an optimist!”  to which I had to ask “How do you mean?” and the answer “Someone who brings a canoe to Death Valley must certainly be an optimist!”  We had a good laugh at the irony, and I decided I needed to be sure to get some good pictures of it. 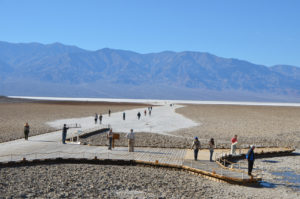 Back to the main road I headed on to Badwater at 282 feet below sea level.  The salt flat closest to the parking area appears to the lowest as it still had just a bit of standing water.  Apparently five weeks ago the flats were covered in shallow standing water all the way across the valley.  The flat would have the same chunky crystals of salt but for people walking.  I walked out further than most folks.  There were only two other people who had walked further today, one was but a dot, while the other only a bit ahead of me.  I would only realize just how little of the width I had walked when I could see from above at Dante’s point.  The road was closed beyond here so I headed back. 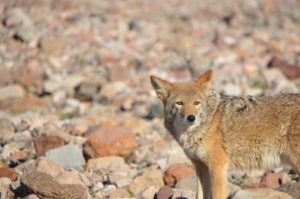 Along the way I spotted a young coyote hanging around near the highway.  In talking with a ranger later I learned that the young coyotes see the road as a source of food.  Not so much because of people, but because of road kill.  She also told us that the coyotes like to come to the resorts and eat palm dates that fall to the ground.  Unfortunately they often end up as victims of vehicle hits themselves. 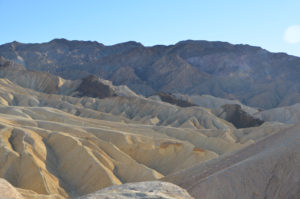 From the Badwater road I headed up the road to the east entrance and Zabriske Point.  A short walk up a viewpoint provides a spectacular view of the formations here.  Trails lead downhill from here over to the road I had just driven along.  Nearby is the Harmony Borax Works birthplace of the famous 20 mule teams, but this area was closed because of damage from the flooding. 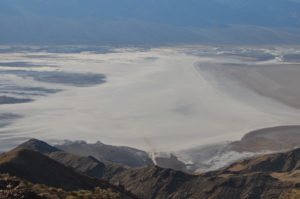 Further up the road I took the turnoff to Dante’s View.  The road twists its way up the back side of the mountain range that forms the east side of Death Valley.  This area has more vegetation.  The road climbs to a view more than a mile above death valley.  The parking lot is about 5450 feet above sea level so about 5732 feet above Badwater which is directly below.  From here I was able to look nearly straight down to see where people have been walking out onto the salt plain.  From here it was clear that the progress I had made was but a very small fraction of the width of the valley.  It was also pretty plain to see the limits of where the transient lake water had pooled in the recent wet weather. 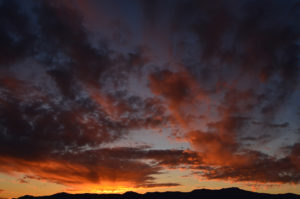 The sunset from here was wonderful.  Not only were clouds on the horizon lit in vibrant colors but clouds directly overhead came to life, and in the distance the sky turned pastel shades of purple and red.

Later after dinner, I headed out in the cold night and tried a bit of star photography.  This didn’t turn out so well.  First off It was pretty darned cold.  This and being tired meant I didn’t feel like driving more than maybe 20 minutes out from camp.  That made it hard to get away from the light from passing cars.

Next day, first of December I headed up over Towne Pass to the west at almost 5000 feet and south through Panamint Valley, to highway 395 and from there south to Redlands to visit my sister.

In northern Arizona the road passes through more rugged terrain.

Traffic on the other side is down to one lane and has been stop and go at best for perhaps 30 miles. Scenic and wide open on my side.

Both directions sharing one side of the freeway as they work on the other. Does it remind you more of the Death Star Trench or a Luge Run?

Back out on the wide open road in Nevada, I think we’re heading for those mountains.

Good temperature for us northerners.

Roads were closed to this area due to flooding. But got to see the exhibit.

My spot in the trailer park. Huge streetlamp adjacent to my site meant it never got dark.

Fire pits by the restaurant

Daytime at the trailer spot

The road in front of my trailer spot. Had the feel of a residential mobile home park.

100 feet below and descending.

The road helps give some idea how big the valley is.

Stopped to climb a little hill beside the road. Nice view out over the valley

Colorful (note a few plants here and there)

More of that waterway

Looking at the base of the mountains. Similar terrain to Artists Drive area.

Alas the rangers nearby would not have been amused.

Looking back at the parking area. This was about as far as most folks were walking before turning around.

Alas I will be turning around. Two people out farther than I am, one on the right, the other near center. Even the guy in the middle is probably only an eigth of the way across the valley!

If you don’t have your pass, buy it now, before the ranger asks…

Who is the wise guy with the canoe on his roof?

Young Coyote near the road

Oh, please… if you don’t have food just move along.

Wide smooth path up to the view point.

Look closely at the ridges, where you will see foot paths.

Looking back at the parking area

The road to the Borax Mining area, washed out.

Dante’s View, over a mile above Death Valley.

Looking down at Badwater. Where people have walked the salt crystals are smoothed out and it appears creamy colored.

Badwater at the right, the parking area is behind the hills below, you can see the road (closed) that continues around the alluvial fan. The creamy colored area is where people have walked.

The light areas adjacent to Badwater were covered in water a few weeks ago.

Sun set starting. Note the reflection on the saltpan

Looking to the south

Looking above the parking area

Show above and behind too. (Parking area)

Heading out, we’ll rise from just below sea level to almost 5000 feet in 16 miles.

Note the snow on top of the ridge.

The mountains are much taller than the pass here.

Looking back from Panamint valley Eastward at the mountains we just came over from Death Valley next door.

A little water damage here too.