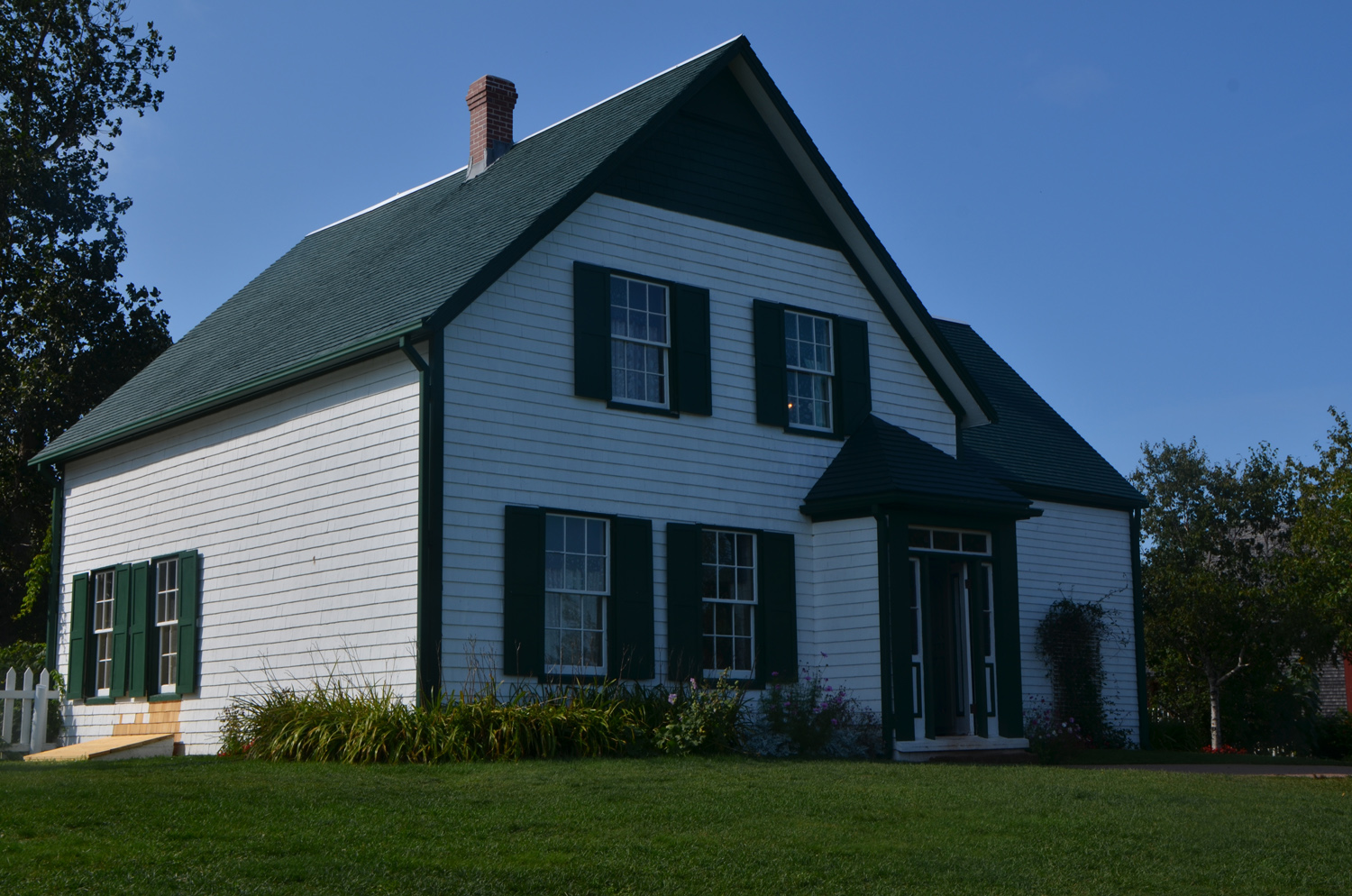 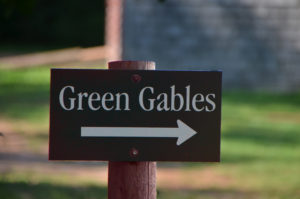 September 16th, 2015 – Prince Edward Island – The Green Gables National Heritage Place – as the fictional character Anne would say of the place, so much “scope for imagination”.  The character Anne was fond of imagining.  The author Lucy Maud Montgomery spent a lot of time at this farm and with the success of the book “Anne of Green Gables” published in 1908, it was preserved as a national treasure in 1937.

But I’ve done it backwards.  I saw this all over the maps and PEI literature and had to go to the Wikipedia article to get some background.  It wasn’t sure it would be so interesting, until I was in front of the site on a nice day.  I thought to go have a look and see, after all maybe one of my readers will have fond memories of the books and will shame me for not availing of this grand opportunity, and beside this it was a nice day for a stroll around a farm and in the woods.

But now, after the visit I decided I should read the book.  I have found it on Amazon for a mere 99 cents, apparently in public domain these days.  So I’ve started reading it and find it quite engaging. 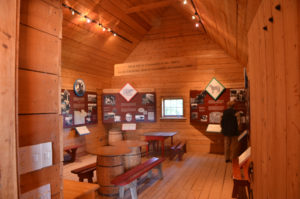 The self-guided tour of the grounds starts in a theater for a very brief presentation about the author, the book and the site.  When you exit the theater you are on the grounds of a farm as it likely would have appeared near the end of the 1800’s. 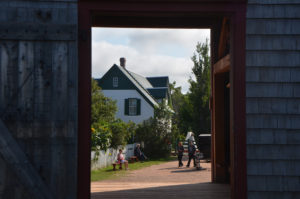 You pass through a barn whose doorway frames the white house with green roofs (featured image).  The barn has exhibits in it and attached is a small snack shop where most apparently a fresh batch of cookies had just been baked.  I can say this with authority because competing with the fresh smell of hay in the barn was the warm unmistakable aroma, such that you could see them on a cooling rack waiting for you to sample them.  No one entered the barn that didn’t immediately comment to the person they were walking with, “oh, smell that?” with a look that said “how wonderful, my mouth is watering” 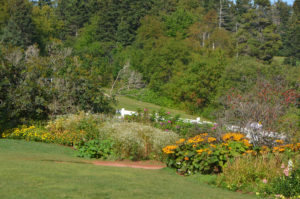 The house is surrounded by a neatly manicured grass lawn, and the front of it slopes away gently to present a bit of a view of the grounds.  There are trees, presumably cherry as described, but today not in bloom. The house itself has shingled sides all painted white, with windows whose dividing lights are also white, but trimmed with forest green and with shutters on either side in the same green. The tallest part of the gable end siding are green as are the gutters, downspouts and shingled roof. 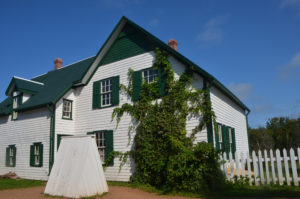 Ivy climbs on one wall of the back of the house, and the well house stands near the back door a white steeply angled triangle with a door in the front and crank on one end.  The lawn is bordered by flower gardens that are overflowing with a grand variety of blooming plants. A horizontal slat fence runs behind the gardens, painted white, it makes a fine contrast to all the shades of green of plant leaves. 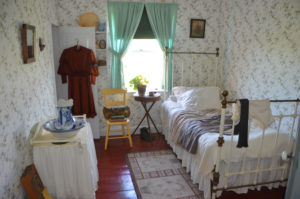 Behind and away there are fields of green and more woodlands.  The house is open for a walk-through and all the rooms are set as close as possible to the descriptions in the book or where not described in full detail they are set as would be typical of the time and place of the stories.  The stairs are a bit steep for some folks so they do offer a book of photos of the upstairs if you can’t make it up there.  But do go if you can.  And if you can’t get there at all check out this virtual tour. 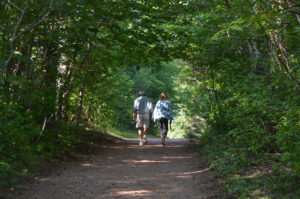 There were several buses of people having come from cruise ships visiting the island, and the people there seemed to be doing a lot of imagining.   I of course was new to it all and saw it more as a study in history and of the people who were visiting.   When I took a stroll through the woods along the “lover’s lane” trail I was pleased to see the couples enjoying each other’s company.   One younger couple came literally skipping down the lane holding hands with huge smiles, which spread joyful laughter among the others walking the path.

It was too bad that the folks were on a tight schedule.  I watched many folks stop, check their watch and comment to the other about a time, and head back.  I however had all day if I wanted and so as I headed further along the balsam hollow trail I had it to myself.

Well, maybe you’ve read the book, maybe you will decide to do so for the first time or again.  But I hope you enjoy the pictures.

The entrance and ticket windows

Map of the grounds

The barn as seen from the house.

Loft in the barn

The house framed in the open door of the barn

A portion of the barn set up as a museum.

Front of the house

From a more conventional angle

The back of the house, and the well house

This small shed covers the well. Note the crank on the end and a door for access on the side.

A lot of flowering plants

Another of the gardens

Inside the house. Parlour

And the side board

A couple enjoys a walk in Lover’s Lane

After winding through the woods, this stair brings you back down to the main trail.