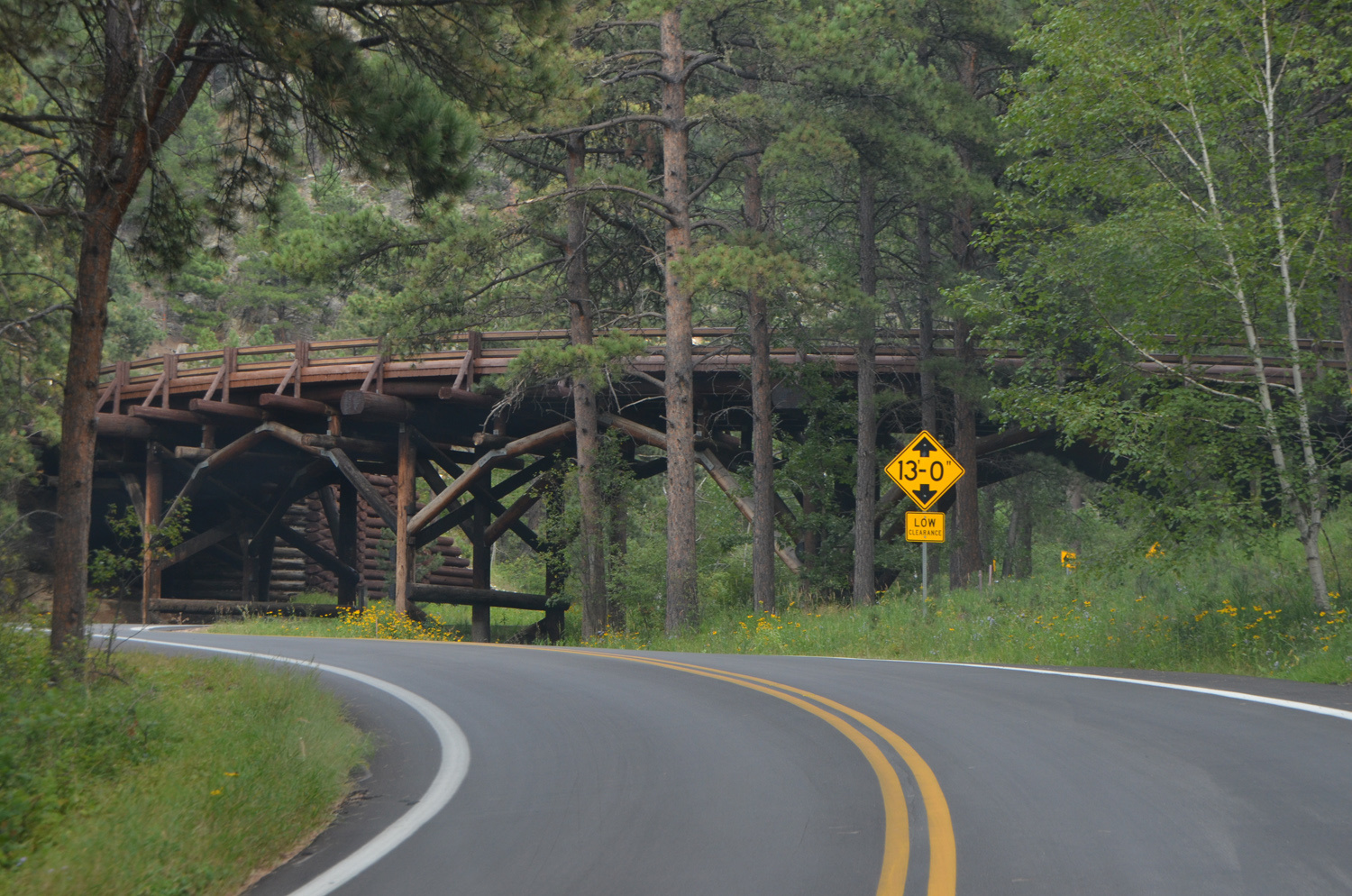 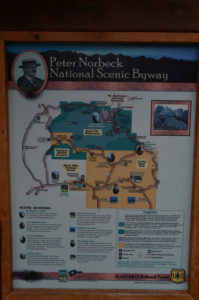 August 31st, 2015 – Black Hills, SD – When you leave Mount Rushmore and head east along highway 244 towards Keystone you come to highway 16A.  North takes you to Keystone and south, while it seems like just another road, is an adventure for the driver.

The Iron Mountain road is narrow, twisty and pretty.  It has narrow tunnels, corkscrew turns and plenty of views.  Not right for every vehicle, and my rig was probably about the most you’d want to do it with.  Much more fun with something really maneuverable.  There is a nice picnic area at the top, so that might be a good reason to come up here, but the road is the star. 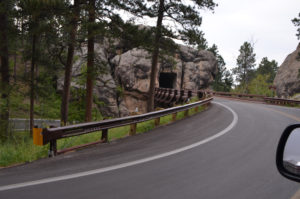 The first thing that will caught my attention was a loop in the road on the GPS.  I looked ahead and saw a bridge over the road and a turn underneath it.   The road comes up the slope turns left and completes three quarters of a circle going up as it turns.  Then it goes over a bridge at right angles to the road below.  The effect of this long right hand turn is that you end up going right but while turning left and gaining in altitude. The structure of the bridge is made of logs, and looks in great condition for its age.  There are quite a few of these, and at least one goes straight into a tunnel after the bridge. 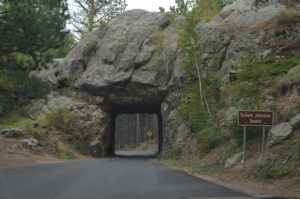 Now the tunnels are through hard rock and clearly they have been left in pretty much the original rough shape from when the road was built and only Model T’s were going through.  These tunnels are narrow and low, and roughhewn.  They are only wide enough for traffic to go one way, and most of them have a right angle approach on at least one end.  Which means that you can’t see the oncoming traffic in the tunnel until you are nearly committed to entering yourself.  So there’s often a bit of backing up going on at one end or the other. Happily, I was lucky and didn’t have to back the trailer. 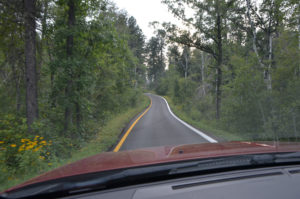 Another fairly odd feature of the road is the several divided sections.  Not unusual to see a divided road, but here each side is only one lane, and with no shoulder.  The two lanes diverge and a single lane path leads through the woods across the hillside.  The two roads take roughly parallel paths, but wind around their own obstacles and aren’t always close enough to see one another, perhaps a hundred feet or more apart.  There is no more shoulder on these roads than anywhere else on the road, and it is funny to see such a smooth road with a white line on one side and yellow on the other.

This area is close to Mount Rushmore so there are several places where there is a view of the sculpture from a distance.  I’m told that one of these tunnels is famous for a view which is lined up with the mountain, but I didn’t know about this before the drive, and didn’t happen to notice as my attention was locked onto navigating the tunnel and the traffic safely. 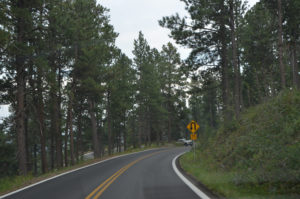 Coming down there were many hairpin turns, and it was fun watching the cars come up, seeing them directly below and then ahead and then beside.  It was late afternoon and the deer were alongside the road a lot.  Low speeds made that less of a problem, but still cause for vigilance.

Overview of the area

Road passes under bridge turns left 270 degrees while rising and crosses over itself to turn right.

Top of one of these 270 degree turns, after bridge goes straight into the tunnel.

Southbound “lanes” of this divided highway.

Two short tunnels in a line.

Road was clearly blasted out of the side of the mountain

Mount Rushmore in the distance

Hairpin turns heading down. 15mph was a good speed. Downshifting to save the brakes.

Another of the tunnels