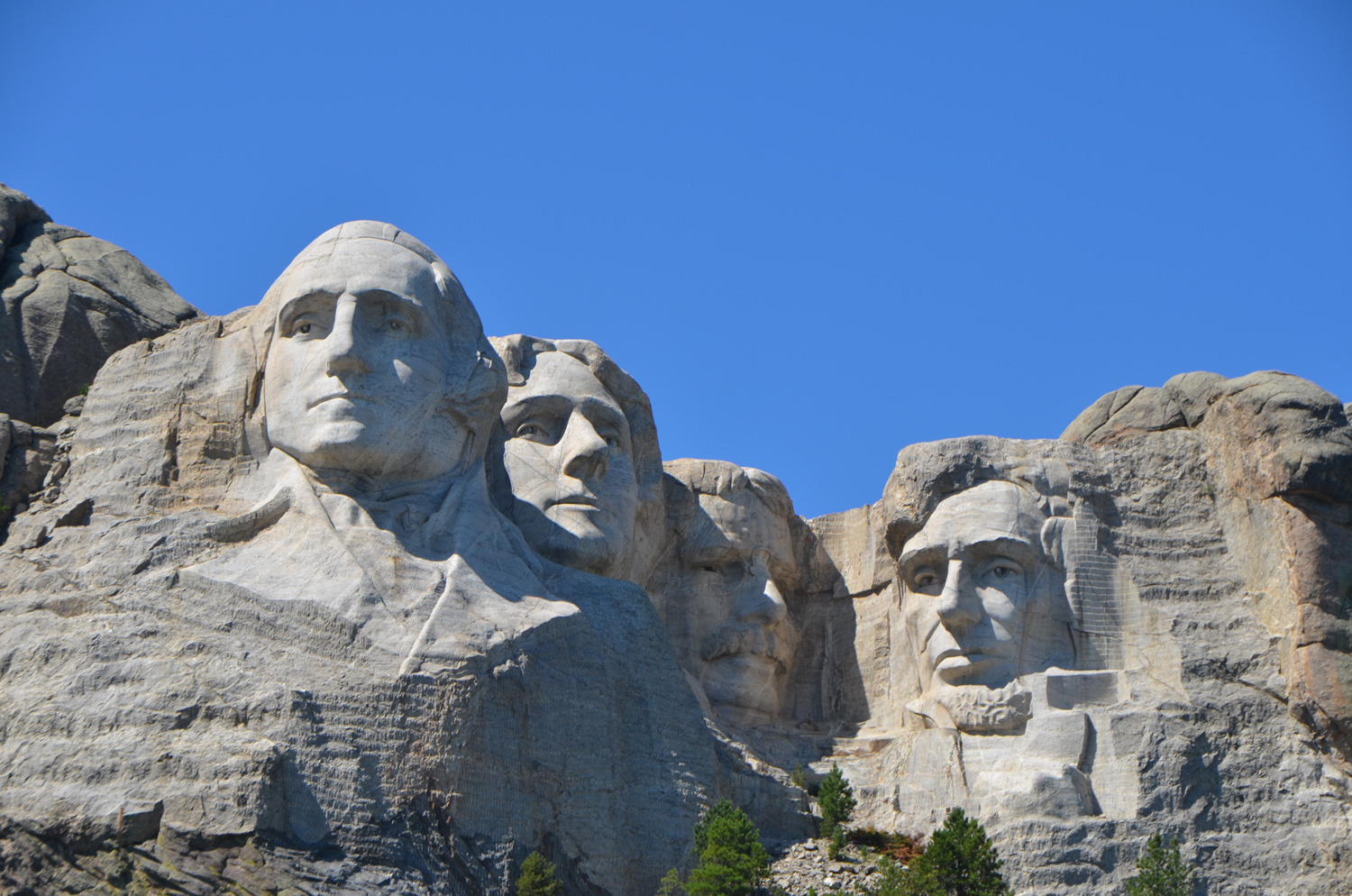 August 31, 2015 – Mount Rushmore, SD – I hadn’t visited Mount Rushmore since I was about 12 years old. So another stop was due. I chose to take the scenic route through the mountains rather than get back on I-90 and bypass it all. It did take a bit longer, but I enjoyed both the drive and the scenery.

A person could spend several days exploring all the towns and attractions that I passed by. But that wasn’t today’s agenda.  I actually visited Mount Rushmore twice on two consecutive days. The second day had such a bright blue sky I couldn’t pass it up.  No worries about parking though, because your parking permit is an annual pass. I was quite pleased with the parking facility and given the trailer and some great timing I got a spot right up near the top. 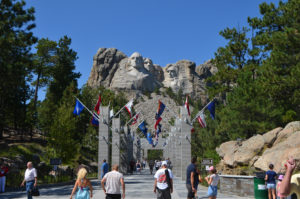 The mall/walkway that leads to the Grand View Terrace is paved with beautiful stone, and is open to the sky with flags waving from the tops of stone pillars. People are stopping and taking pictures, posing groups and taking selfies everywhere you look. It is pretty much part of the deal that you are going to be in a lot of pictures and they will be in yours.

The view from the terrace is the front on view and it is very nice. But if you wander either right or left you can get on a trail that goes in a loop up to the base of the mountain and by the “Sculptors Shed”, where you can see a bit more about the process of creation. The trail has a lot of stairs, so it isn’t for everyone, but there are plenty of places to rest if your concern is just being out of breath. 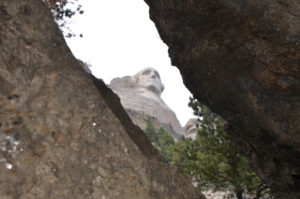 Along the trail there is a place where several house sized boulders make a small cave. The trail has a small spur that leads into the cave where you can look up from out of a large “crack” and see the sculpture from a very different perspective. 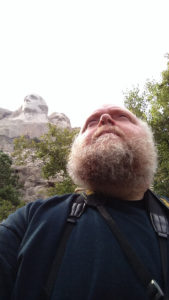 When I came to the landing where you are at the base of the boulder field I decided that I would try to emulate the angle and expression of George Washington in a selfie. The group who had been hiking just ahead of me didn’t speak much English, but they were interested in helping me take a picture (quite kindly).  But when I motioned and explained what I was trying to do they all started laughing and using scraps of English to tell me how I look very presidential and they were trying to decide which I looked like most.  Of course I was laughing with them, so taking the photo was even harder. 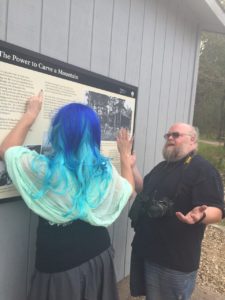 When I got to the sculptor’s shed area I was going to look at a sign when this amazingly brash woman stepped in front of me. It was a rare occurrence given how polite everyone else was, but then again she was also the only person sporting electric blue hair. She did however give me her card, which I must say is about as odd as she was. I am really not sure what to make of this encounter but I can honestly say I won’t be forgetting it soon. Her name was Bridget West and she’s hard to miss.

In the sculptor’s shed there is a one twelfth scale model that was used for reference on the mountain carving. They used a measuring technique that put each measurement in three dimensions measured in inches on the plaster model, and the same number of feet on the mountain. 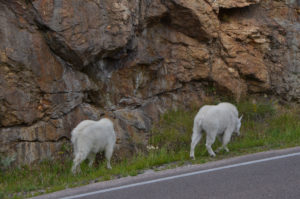 You may want to grab some ice cream here on a hot day, it surely is tempting, and the sign that advertises it has a photo of a kid holding the ice cream up as he were sharing it with George Washington.

As you leave don’t stop looking around. As I was pulling out the first day there was a family of mountain goats spread out on the islands that direct traffic approaching the stop light. There where at least three young, and a couple of adults.  One of the adults was wearing a radio collar.

Then again as I was leaving the second day there were three mountain goats right alongside the road initially all up on the rocks, two came down to the road and were grazing as the moved along.

View from the trail

This boulder along side the trail has a short side path

Under and between these house sized boulders

to a unique view.

Looking up from the base of the sculpture I got an idea to do a bit of a different selfie.

About the use of compressed air tools

Path between Sculptor’s studio and the Terrace

One of several fire places along the path

And a closer shot

Had to come back for this bright blue day

Flags of the states of the union

And the wide shot

With the blue sky

This one is about ten feet up from the road.

More goats around the corner