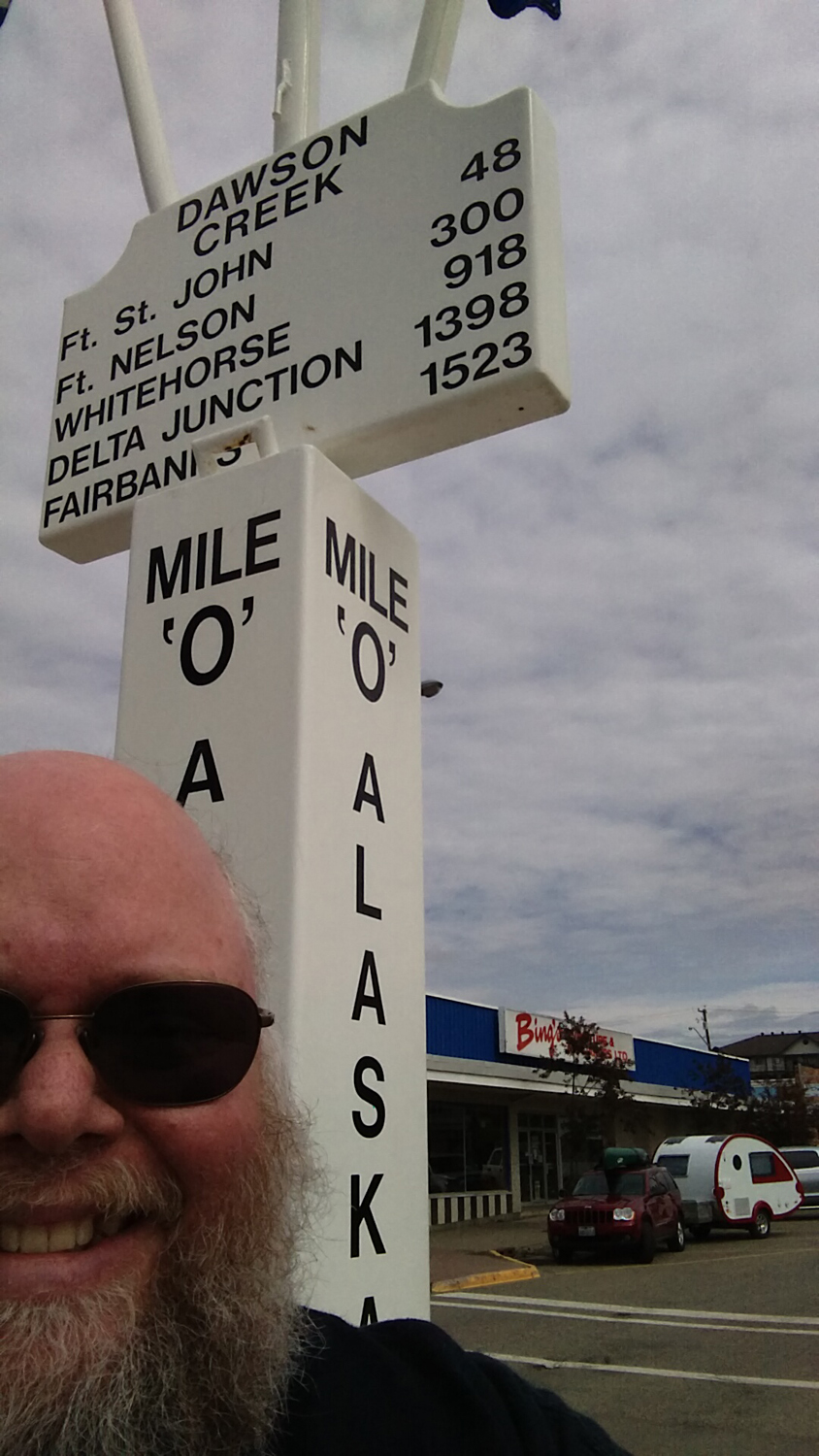 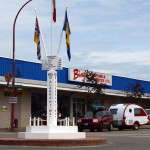 June 22, 2015 – Dawson Creek to Fort Nelson –  Today’s lesson, keep your tank filled when there are fewer gas stations, more on that later.  Mileposts were historically very significant along the Alaska Highway.  It was the identity for many places, so when Canada changed over from statute miles to kilometers and replaced the “mile” posts with “kilometer” posts the adjustment was difficult for some.  But one “milepost” is the same regardless of measurement and that is mile zero, or the start of the highway, in Dawson Creek.  The marker stands in the middle of an intersection in the old downtown area.  Nearby is the visitor’s center in an old grain elevator, worth a stop and chat, be sure and get directions to the curved bridge just outside of town.  There is another sign for mile zero here that might be easier for a photo opportunity since you aren’t standing in traffic.

I arrived early enough to find a parking space for the trailer near the intersection of 10th street and 102nd avenue.  Actually three spots as I swooped into the end of the angled parking spots.  It was quite interesting watching the traffic and tourists interact.  People focused on taking their photo while standing in the middle of the traffic lane with trucks and cars bearing down on them.  For the most part the early morning drivers seemed used to this and there weren’t any close calls.  People standing on one or another corner would take turns going out and standing on the island, and often the next person in line would offer to take the photo.  I took some long shots with the car and trailer, and a couple of selfies close up while standing on the island. 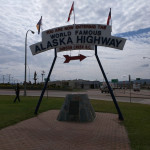 Next stop was the visitor’s center nearby, where I chatted with the folks there for a few minutes and got directions to locate the Kiskatinaw bridge just outside of town.  Next door in an old grain elevator is an art gallery, but I didn’t have time to look around there.  I did take a quick walk over to the other mile zero sign, waited for the group of motorcyclists to finish with their photos.  Then out on the road. 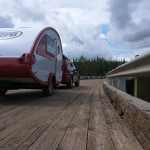 The Kiskatinaw curved bridge was a good side trip, I was especially happy to to drive on some of the historic roadway.  Less traffic here was nice too.  If I had more time I thought it would have been a great place to fly my drone for some video or pics.  But that wasn’t in the cards today.

I was surprised at the level of development along the road leaving Dawson City.  Lots of heavy industry and businesses all centered around or serving the oil and gas industry.  These businesses along both sides of the road meant a lot of local traffic and congestion.  All the way to Fort St. John the speed limit was low and the traffic heavy, over an hour in heavy traffic wasn’t a great way to start the day.  The number of 20-something males driving month old trucks decorated with winches, over sized tires, loud exhaust and every other bolt-on toy was amazing.  They all seemed to be in quite a hurry to get somewhere too, having left any form of manners somewhere else.

The weather was mixed, with rain showers tracking across the road from time to time.  The road was wet more often than dry, sometimes I would drive into and out of the shower in a minute or two, and sometimes the shower had just passed as evidenced by standing water.

As I finally got out on the open road, I found myself behind a truck pulling a very large pre-fabricated building.  The load was wider than the lane, so that when traffic was coming in the oncoming lane it had to drive partially on the shoulder, and it kicked up a huge amount of mud and debris for a long ways back.  The truck would slow to 20 miles per hour or less as it came to the top of a rise, and then accelerate to well over the speed limit on the downhill.  There were a dozen or so cars ahead looking to pass, and many more behind me.  I got tired of the mess so I pulled over and let the truck get five or ten minutes ahead. 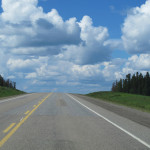 When I pulled back out I kept with traffic at about the speed limit, but in very short order I was up behind a line of cars behind that truck again. One by one the cars ahead managed to find a place to pass, until I was the next car behind it.  By now there was also quite a line of cars behind me as well.  Without the trailer I could have passed easily, but with the extra load the timing had to be pretty exact.  You couldn’t pass on the uphill because you can’t see the oncoming traffic, and when you could see on the downhill the truck really got moving.  I got tired of having the windshield covered with this muddy spray, so I took the opportunity to pass when it finally came and kept my speed up to stay ahead.

I was burning a little more fuel because of the trailer, and had planned a fuel stop early in the day because I saw that fuel was a little sparse on towards Fort Nelson.  But it turns out that I was busy looking for my chance to pass when the fuel stop came and went.  I realized this when I was many miles down the road.  I needed to find another place for fuel, but I had just managed to pass that truck, so I didn’t want to stop if I didn’t have to.  I couldn’t pull out the milepost while I was moving, so I used the in dash GPS to suggest something ahead.  It suggested a place and I accepted it.

When I arrived at the GPS recommended fuel stop I was greeted by rickety barricades made of barrels and caution tape, and a weathered piece of plywood with faded spray paint that read “Closed”.  Now that I was pulled over I could do some research.  The milepost listed this place, and that it had closed a season or two ago.  My tank was pretty empty at this point, and I was really a lot further along the road than I had expected, about 75 miles from Fort Nelson.  The nearest fuel was ahead in Fort Nelson, further if I went back.

I made some guesses at what mileage I would get at a given speed, and the amount of fuel left in the tank.  From this I calculated that at 30-35 miles per hour, I could make it there, just barely.  Best bet would be to keep the load on the engine light, so it would stay in its four cylinder economy mode.  So I started back on the road, but slowly.

I found that the gently rolling hills and long straight stretches were conducive to this slow travel.  I could see cars coming behind me for a mile or more.  I would put on my flashers and move over to the shoulder which was almost wide enough for the whole vehicle.  Traffic was sparse enough that this didn’t happen often and never when there was oncoming traffic. 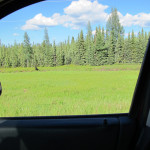 While I was driving like this I saw my first black bear.  He was on the grassy bank by the forest walking along and grazing.  As much as I wanted to stop I didn’t want to break my momentum.  So I didn’t slow down.  But at 30 miles per hour it takes a couple of hours to cover 75 miles.  So during this time I saw another bear.   This time I slowed just a little and used my point and shoot camera to take a single shot as I passed.

Shortly after this I had an epiphany.  There was another gallon of fuel in my generator!  So I started looking for a place to get off the road.  After a bit I found some kind of a utility pad, a clearing large enough to pull in and swing around and back out on the road without a lot of fuss.  I pulled off and dumped the generator’s fuel into a gas can and from there into the car’s tank.  Then away I went.

Nearing Fort Nelson the road was more level, and the traffic starting to be a little heavier, and then the speed limit came down a bit too.  So I picked up the pace to 45 miles per hour, and was mostly able to keep the economy four cylinder mode engaged.  With the gas gauge further south of the empty mark than I’ve ever seen it I pulled into the station under my own power.  I am pretty certain that without the fuel from the generator I wouldn’t have made it.

Happy to have made it I used the Milepost to locate an RV park, mostly because I wanted a shower after the several days dry camping. 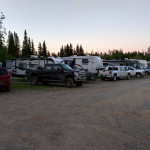 It was getting late, and the RV park was pretty full, but they had a few spots. I found my spot and started unhooking and setting the trailer up.  It was pretty much the first time on the trip because I had left the trailer hooked up the previous nights staying at Walmarts.  Everyone was settled in, done cleaning up from dinner.  They were sitting around campfires, in lawn chairs, chatting quietly.  Then into that peacefulness… Honk! Honk! Honk! Honk! I had bent over while setting up the trailer and something in my pocket had pushed the panic button on the Jeep’s remote.  Turned off, I went back to my task, and imagined all the other campers conversations turning to the new guy.  During the trip I avoided doing this again myself, and remembered not to think ill of the person to whom this happened the several times I heard it.

People standing in the street to take photos of the mile zero marker.

Closer look at the marker

Looking down from the brdige at the water below

Historic milepost. Clearly the original would not have said “Historic” on it. Current posts mark kilometers not miles.

Coming over a rise.

The road leads off to the horizon

Bear out the window as I drive slowly past.

RV park at 4am

RV park at 9am

A Sunday Drive To Mile Zero
Next