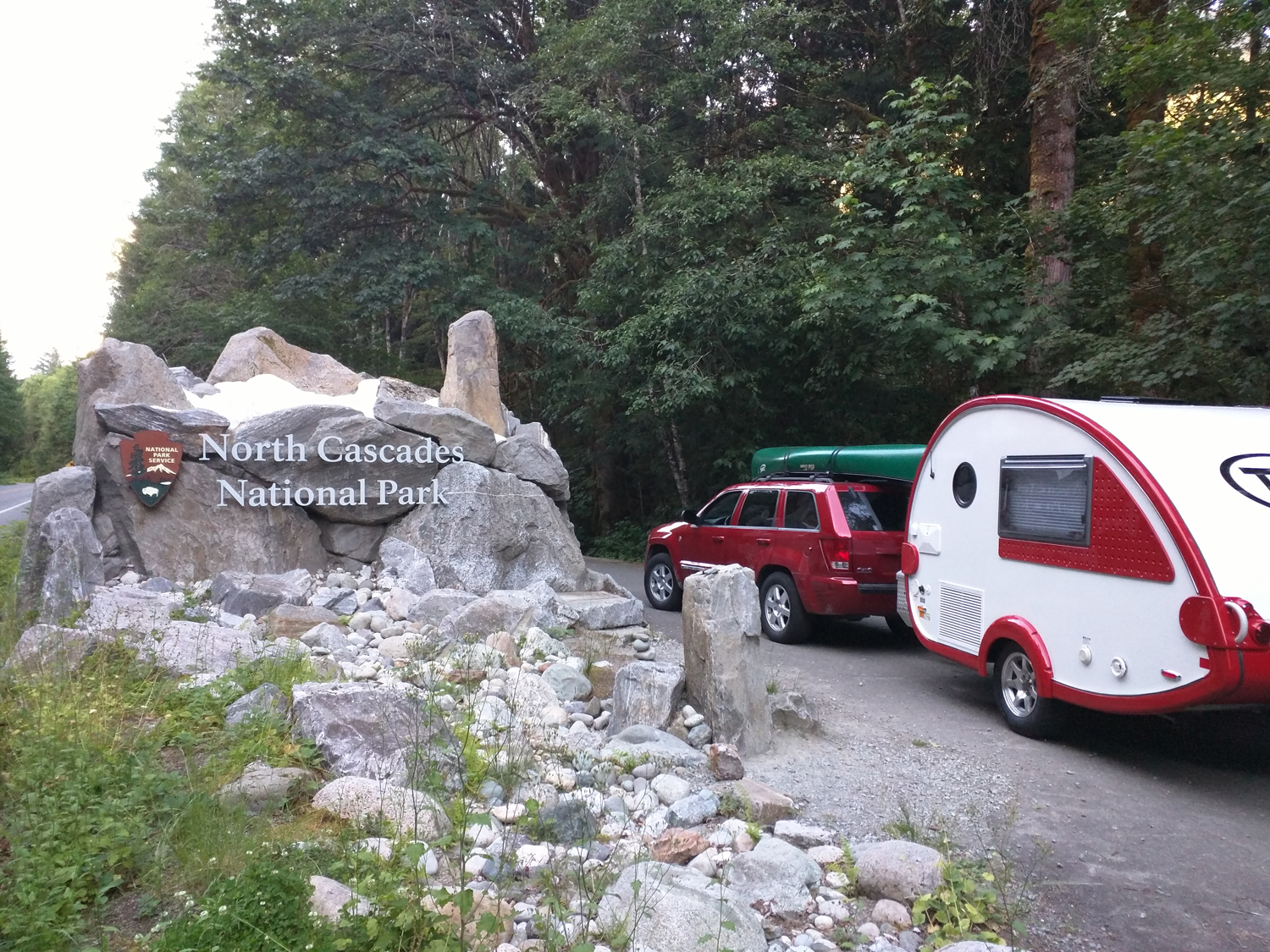 June 11th, 2015 – For the past several weeks I’ve been making lists and reviewing my gear.  I want to be moving, and I am too anxious sit in the driveway while I figure out how to load the gear into the trailer.  I bought several blue plastic totes to collect things while I prepared.  So I put the seat down in the back of the Jeep and shoved the totes in.  In four days I’ll be back and all but one of the totes will be empty, and the trailer less so.  I’ll be used to the way the trailer rides behind the Jeep, more familiar with the trailer’s systems, and ready to head north.  Way north. 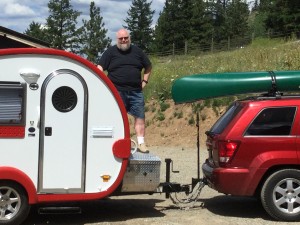 My destination today is Twisp Washington, to visit my Aunt Janet and Uncle Don, my cousins, and their families.  The destination is a couple of hundred miles one way.   I’ve chosen to head up I-5 to Mount Vernon and across highway 20.  This is a very scenic route through the North Cascades National Park.  On the west side you head up the Skagit River to three hydro power dams, Gorge, Diablo and Ross.  Then up over two mountain passes (this route is closed in winter) and down along Early Winters Creek to the Methow River (locals say met-how, not meth-ow).  Through Mazama, Winthrop and Twisp, then west out of Twisp.  The final bit of the drive includes several miles of gravel road, and a short hill climb.

Today’s weather is great, and the road is a pleasure.  The car is behaving well and the trailer feels natural on both up and down grades, and through the turns.  As I am driving the winding roads I find that the trailer holds the rear of the Jeep down so it feels more stable.  The body roll rate is more consistent because the springs are already loaded.  After a few test slalom’s it is time to get back to reasonable driving, back luck to break it on the first day. 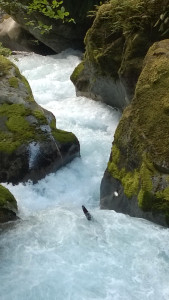 I’ve been over this road so many times, but when the weather is this nice you need to stop a few key places and just take in the view. There’s a nice photo opportunity with the Park Entrance sign (featured image).

The park visitor center in Newhalem has a small interpretive center and a nice walking trail.  A separate trail that I particularly like can be found at the north end of Newhalem, Ladder Creek Falls Trail.  There is a small parking lot on the town side of the river and a suspension bridge over to a garden.  Beyond the garden and the powerhouse is a trail along a classic North Cascades “cascade”.  This is a paradise on a warm summer day, dappled sunlight playing on the surface of green and white water as it bounces from one moss covered rock to another.  I didn’t stop here this trip, but I’ve included some pics from other trips.  Need a little water or a restroom?  Newhalem has these as well as a picnic area, and a nice locomotive on display.

The three dams along the Skagit river generate power for Seattle, and are operated by Seattle City Light.  I highly recommend booking a tour (in advance), especially a boat trip along Diablo lake.  My family did this several times when I was a kid, and I remember it fondly.  Back then you would park in Diablo, then ride the incline railway up (large enough to lift a railway car) and walk to the boat.  Now I think they have you park closer to the boat, but these things have a way of changing with time. 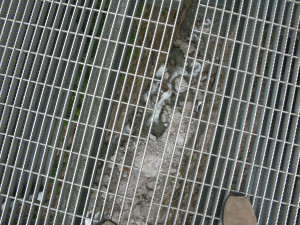 From Newhalem, you enter a deep canyon and wonderfully windy road.  There a couple of short tunnels blasted through arms of the mountain.  Your next stop should be at Gorge Creek Falls.  There are two small parking lots, the one before the bridge is bigger, but if you are driving a long load have a look at these from a satellite view, I believe they want longer loads to stop in the second lot.  In any case get out and walk over the bridge and look straight down through the metal deck.  Well, even if you don’t care for this kind of thrill, hop out and don’t look down, but enjoy the long tall waterfall in the deep narrow gorge.   You can see some of this from your car as you drive over, but you can’t stop and let it soak in.
If the road over the top of Diablo dam is open, take this very short side trip.  It is uncommon to be able to drive on top of any dam these days, and this is plenty scenic even if you aren’t interested in the novelty. 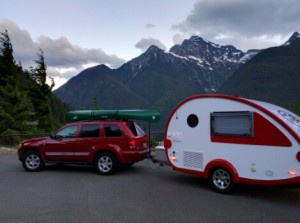 The road continues up and over through forest and back down to the lake at Thunder Arm and Colonial Creek Campground.  From here there is a steady incline to Diablo Lake Overlook.  I always stop at the overlook, and have had many a picnic there.  Look closely you may see boaters on the lake below.  There are several boat in only campsites that you can reserve around the lake.  Quite a treat.  Oh, and you’ll find a convenient set of pit toilets here, but no water. 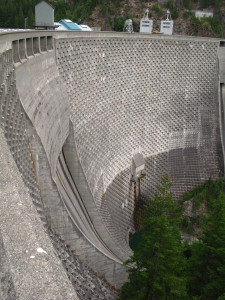 Now, if you are a little energetic I’ll suggest that you stop a little further up the road and hike down to the top of Ross Dam.  It is down to start, so that means it ends with a long uphill climb, but I think the reward is worth the effort.  The trail drops about 500 feet over a mile and a half or so through forest with occasional views of the dam and up the valley.  When you arrive at the dam it is not uncommon for your party to be the only people in evidence.  It is typically very quiet and the stillness is a strong contrast to the immensity of the construct you are standing upon.  On one side is deep Ross Lake that extends north beyond the border into Canada, and on the other side the 540 foot tall waffled face of the dam falls away to Diablo lake below.  If you are a hiker or boater, Ross lake affords access to a huge wilderness.  If you aren’t so much, consider the floating Ross lake resort, but reserve well in advance.

As you continue the drive, you will have your one chance to see Ross dam from the road.  Eastbound you have to be paying attention, stop and get out at the pull outs.  Westbound you might see the lake as a clue.  From here the road leaves the Skagit and Ross lake area and follows a tributary east.  It heads east up to Rainy pass.  Here you will encounter trailheads for the Pacific Crest Trail, one for Northbound travelers and another for Southbound. 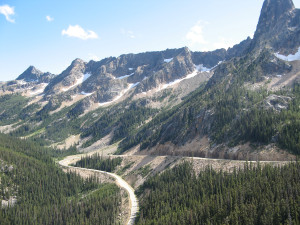 As you continue east the road rises further to Washington pass. I recommend a stop at the overlook and a short walk out to the amazing view.  The trail is suitable for most folks and you will find yourself standing on bedrock perched hundreds of feet above the valley and a view of where you are heading next.

From Washington pass you descend along Early Winters Creek to Mazama.  Now, if it has been wet or cloudy so far, you can expect that it will be much dryer and warmer now.  If it was pleasantly warm on the west side, expect hot on the east.  In any case, notice the difference in the forest.  On the west side you see a lot of Douglas Fir, Spruce and Hemlock, on the East it is predominantly Lodgepole pine. 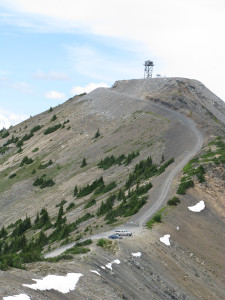 Now, a plug for one of my favorite drives.  Hart’s Pass.  To the north out of the little community of Mazama.  If you are in a short rig or can drop your trailer, I recommend a side trip here.  You have to like driving on unpaved roads, it is 35 miles each way on gravel.  So your drive in will take over an hour, with sensible speeds being between 25 and 35.  But at the end you will be level with the peaks of the north cascades, and in the alpine meadows full of flowers (assuming the snow if off).  This is a summer only adventure, and the road is signed for no trailers and no vehicles over 27′, I’d discourage wider vehicles as well, the key being the need to pass on some narrow spots early on that are blasted into a cliff wall.  But you aren’t in a hurry are you?

Well, having arrived at my destination, I enjoyed a great visit, and got a lot of time to just play with the systems in the trailer.  I tried a couple of arrangements for clothes and other stuff.  I decided what needed to be in the car with me, and sorted things by more or less accessible into the storage in the trailer.

North Cascades National Park entrance sign. Unique photo opportunity, complete with fake snow field and a place to set your camera for a timed shot with everyone in the picture.

Suspension bridge over the Skagit river

Just downstream of the Gorge Powerhouse

Behind the Gorge powerhouse. The moss covered side is bedrock. The roots of the mountain barely tamed for this buildings perch.

Bridge into the gallery

Ponds in the garden

Stop at Gorge Falls and walk out onto the bridge. Now look down.

Late in the day

Approaching the top of Ross dam. (approaching from east)

Ross dam from the west side looking back at the face

Upstream side at the east end

Top of the dam.

Part of the scout troop. We stopped to hike to the top of the dam on the way back from a weekend outing.

Ross lake and the trailer from Hwy 20

Me and the trailer in Twisp.

Flowers and grass are abundant when the forest has been pushed back by wildfire.

A field of my favorite flower.

Or rather, “seed pod” as this is the seed pod of the mountain anenome. They remind me of Dr Suess’s Truffula Trees.

My truck parked at the top of the road just shy of the lookout.

This is the view in nearly every direction.

and this is at your feet.

Me and the north cascades.

Every Journey Begins With A First Step