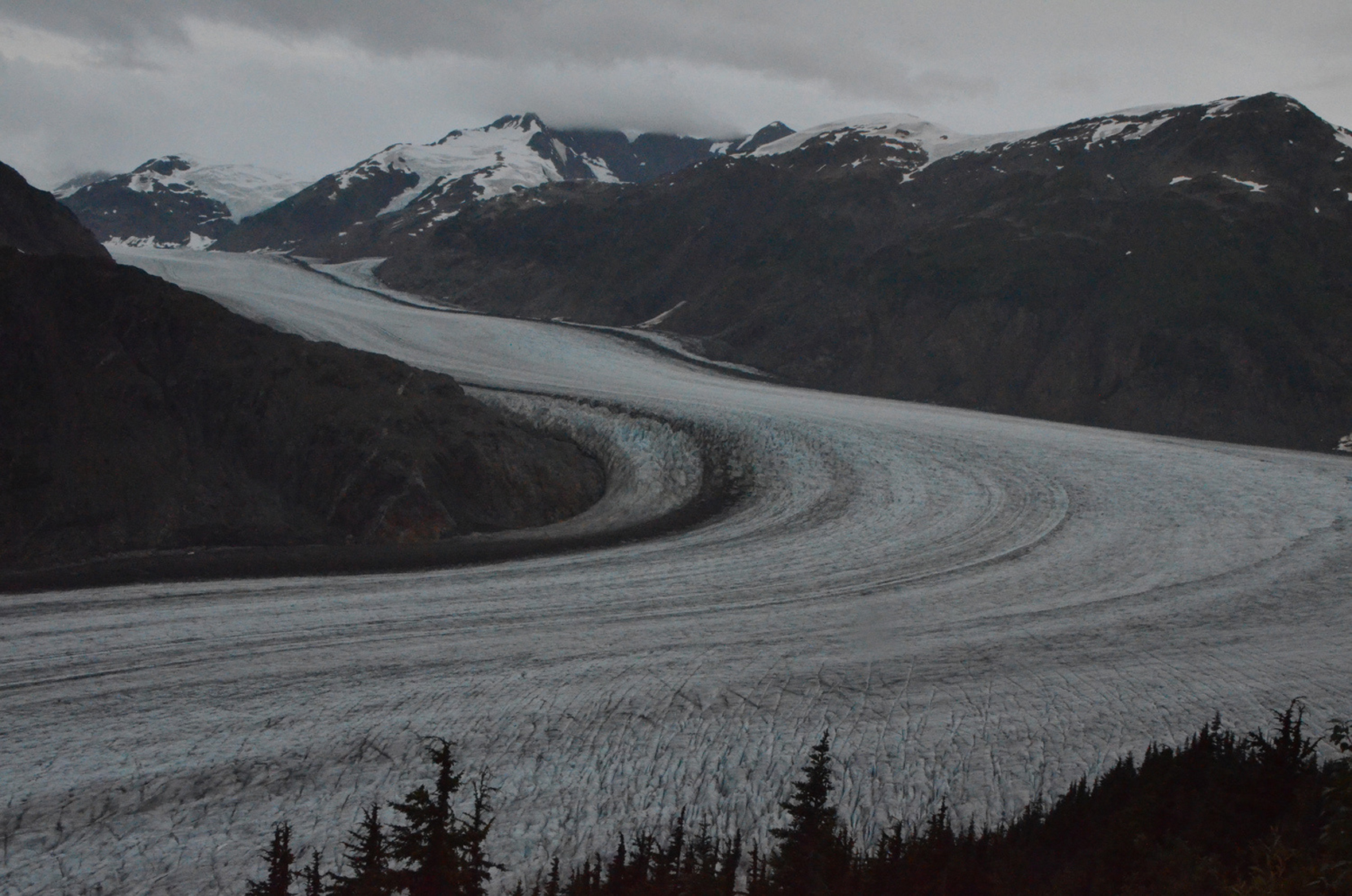 August 3, 2015 – Stewart BC, Hyder AK –  The “Glacier Highway” 37a is a side trip from the Cassiar leading to Stewart BC, and on a couple of miles to tiny settlement of Hyder Alaska.  Hyder is home to one of the few places where bear viewing isn’t a float plane or boat trip away.  I will see plenty of bears, but at the bear viewing area I mostly see people and lots of fish swimming upstream.  A side trip to the Salmon Glacier was the highlight here as I learn yet more about the craziness of limited internet bandwidth. 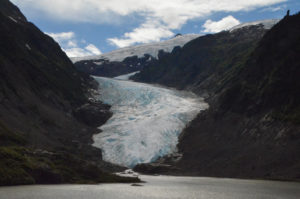 Along the road to Stewart glaciers cling to the mountainsides and snow fields peek over the tops of cliffs.  Early on the road we come to the Bear Glacier flowing down from the snow fields to the south.  A lake with a gravel dam to the west marks the previous extent of the glacier which once came all the way across the valley.

The valley walls are covered with vegetation while meltwater tumbles from above in an intricate series of falls each seemingly taller and more graceful than the last.  It is a place where the temperate rain forest meets the permanent snow field.  The road follows the river at the bottom of the valley trading sides at the river’s demand.  Young black bears graze in the margins of the road among the grass and wildflowers.  As we approach the end of the road the rivers broadens and becomes a braided maze of sandy islands and log jams. 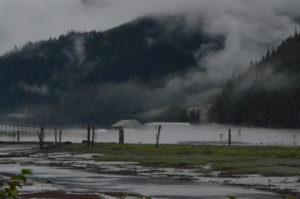 On my way in I had a pretty clear day by local standards.  This gave me a great view of the mountain sides, the river and bay, but was at best broken clouds but an active sky.  The locals were commenting on what an amazing nice day it was.  On the way out I was treated to a show of wispy low clouds and mysterious fogs.  The teased white strands of cotton seemed to catch on the tree tops as they drifted by, while a translucent blanket covered the water of the bay and river.  Apparently this is much more like the normal day here.

Stewart is a smallish town with a few stores and a few small industries.  It sits at the end of a 100 mile long fjord which separates Alaska on the north from BC on the south side.  The US/Canada border runs from near the end of the bay and northward through the wilderness.  The road continues through Stewart through a border check station to Hyder.  Hyder is much smaller than Stewart and with those businesses close by there aren’t many surviving on the Alaska side. 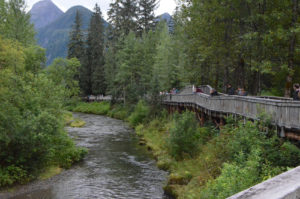 Just up the road is the Fish Creek bear viewing site run by the US Forest Service.  While a bear or two was nearby while I was there they didn’t come where many people were able to see them.  But truth be told I don’t think my timing was good, and I didn’t choose to get up super early to come wait in the morning.  What I did see here was a lot of fish in the river, working their way upstream. 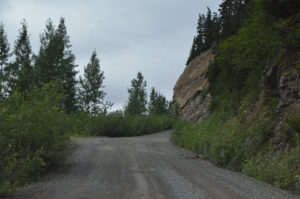 After not seeing bears at the viewing area and having talked to people who had been there several evenings I gathered that the chances of seeing a bear were slim.  So I decided that I should use the last of the daylight to drive further up the road to see the Salmon Glacier.  This was a pleasant gravel road with spectacular views.  A typical road cut into the side of the mountain it felt like home, but I’d guess that a timid driver or folks who don’t like heights might not be as comfortable here.  On the way up I found that I got to put my foot into the accelerator a bit as I wound around the curves up the grade.

There is a guide for the road with numbered points of interest, and as I was driving up I recognized I was coming to the first main view of the Glacier.  As I rounded the bend approaching this I could see the sign, a picnic table and a bear resistant garbage bin.  As I was getting ready to pull into the single parking space however I saw something I had spent the last three hours waiting to see back at the river.  A bear was grazing right in the middle of the viewpoint.  The road hugs the right side of the valley, so the viewpoint was on my left.  This meant I had an up close view from the driver’s window and I was plenty close pulled up on the right side of the road.  I grabbed the camera and shot pics as he worked his way along the edge of the cliff sniffing and grazing.  All I could think was how silly it was that I and so many people had paid to see bears that didn’t show up to eat a smorgasbord of fish, yet here was this guy eating grass and I had a private audience.

The salmon glacier is quite impressive, long and wide it snakes around a corner and down the valley. From this angle you can see the texture of the surface where it has broken and fused and broken again until a regular pattern has developed.  You can see where the stripes have come from along the edges of the tributary flows further upstream.  The sweeping panorama is hard to take in all at once.  Light was waning as I arrived at the viewpoint proper, but held until I got a few pictures.  Then down the hill I went in the twilight and then dark.

I might have stayed longer, but alas I’m starting to get tired of rain and clouds amidst reports of the blue skies and warm weather back home.  Besides I think I’ve found some openings for campsites in Yellowstone.  The lure of the road keeps me moving.

A dryer forest inland near the start of the Glacier Highway

Young black bear grazing near the road. Caught him with this one bit of grass sticking out of his mouth as he paused to see what I was doing.

Hanging Glaciers high on the mountain side.

Bear Glacier and its meltwater lake.

A closer view of the upper part of Bear Glacier

And closer look at the toe.

Waterfalls have carved deeply into this hillside, take note of the waterfall center top.

Here is a closer look at that waterfall

You can see the glacier directly above

In the town of Stewart hills on either side have glaciers on top.

The bay adorned with low clouds and mist

A layer of fog sits over the water by the marina.

A similar fog sits on top of the river.

Fish Creek Bear viewing area has this walkway to keep bears and people separate on the way from the parking lot to the overlook.

The overlook is a long raised deck that follows the stream.

Many salmon in the stream all along.

From the other side of the bear viewing platform.

This is a wet place, as the hanging moss attests.

The road to Salmon glacier cut into the hillside.

Looking back down the valley.

Bear in the parking area of the viewpoint

Along the cliff edge

First view of Salmon Glacier (after the bear)

Looking down at the texture of the surface.

Swooping down around this corner

With car hood, trailer is not in tow here.

Closer look at the texture

Trying to capture the broad sweep in one shot

Trees in foreground for perspective.

The hill behind the viewpoint.