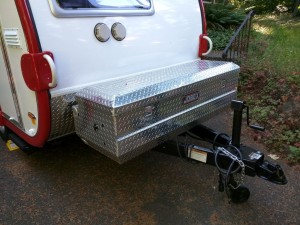 June 2015 – Pre-Trip – I wanted a little extra storage of the “rugged” type, so I replaced the red shroud that covered the propane tank and battery with a diamond plate truck box.  The box contains both my batteries, the propane, a bunch of cords/hoses and tools, and a generator.  It fell short of being able to take my spare fuel cans.  The box is a 61″ bright aluminum truck chest by Jobox.

The box is a great addition to the trailer.  It really fits the decor because of the other diamond plate already protecting the lower part of the front wall.  It was really handy to have this storage for tools, chocks, power cables, water hose and all that.  It is some peace of mind that it locks up pretty securely.

The batteries are under a diamond plate shelf and inside of plastic battery boxes. My cordless drill-driver and impact hammer are stored in their case right on top of the shelf and fit like the space was measured for it.  I store blocks for the stabilizers and a water hose on this side, along with some spray lubricants I like to carry along.   We kept the plug for portable solar panels on the side of the box here next to the batteries, much as it was on the shroud.  In my case this would be for an extra panel to be plugged into the controller to help the panels I now have on the roof. 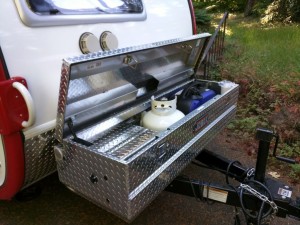 The propane tank sits in the middle of the box in the hoop that we cut out of the shroud to keep it in place.  It sits on the bottom of the truck box, but while it is shorter than the overall inside height, it hits the reinforcing that makes the lid tough enough that you can stand on it.  We cut a little bit out of that reinforcing to make way for the tank.   The propane regulator is mounted on the back wall of the box, and the hose feeds out through a grommeted hole.  In front of the propane tank I keep the coax for hooking up to TV signal.  Beside the tank I keep the nose wheel, the chocks and the hitch lock.

The driver’s side of the box holds a generator, and a metal rail keeps it from sliding around.  In front of the generator I keep the electrical power cables.  In the front corner on this side there is a piece of PVC pipe into which the grey water drain hose fits.  This was also transferred from the original shroud.

As pretty as the box is… it arrived with some dents.  Being on a tight schedule I didn’t have time to get another one, so we made do.  Chris pounded these out, and the shipper gave me a 15% rebate.  The issue was packaging.  It was sufficient for inclusion on a palette, but it is big and heavy (over 100 pounds), so I’m sure it got manhandled.  Basically it had one layer of cardboard and a plastic bag to keep moisture out.  The shipper was Zoro.com, and while they had a good price and were pleasant to deal with, they weren’t proactive about protecting the product prior to shipping.

Since the box was going to carry things that were likely to produce flammable gasses, we also put vents on each end.  One vent is at the top for light fumes, and the other at the bottom (also along the back edge) to allow heavy fumes to exit.

Before we actually saw this box in person it seemed like it would be a little roomier.  But every side has something encroaching on it.  The bottom and top have very significant bevels, which give it a nice look.  The front has space reserved for the latching mechanism.  The back of the box is built to be flush against a wall and still have the lid open until it is vertical.  The ends have pockets to protect the hydraulic lid supports.  The top has supports to make it more rigid, which take away a lot of vertical space under the lid (we cut into it for the propane tank). Had this been a barebones box of the same size with a flat lid, a simple latch, no supports, and sharp corners…  THEN… I think it would have been large enough to *also* house a couple of gas cans.

Box from the front

Passenger side end of the box. Note the two vents and solar panel plug

Passenger side end, note the pocket that protects the lid support arm, and the shelf the covers the batteries

In the center is the propane tank

On the drivers side, the generator and grey water drain hose holder

The driver’s side end of the box. Two more vents.

Under Trailer Modifications
Next