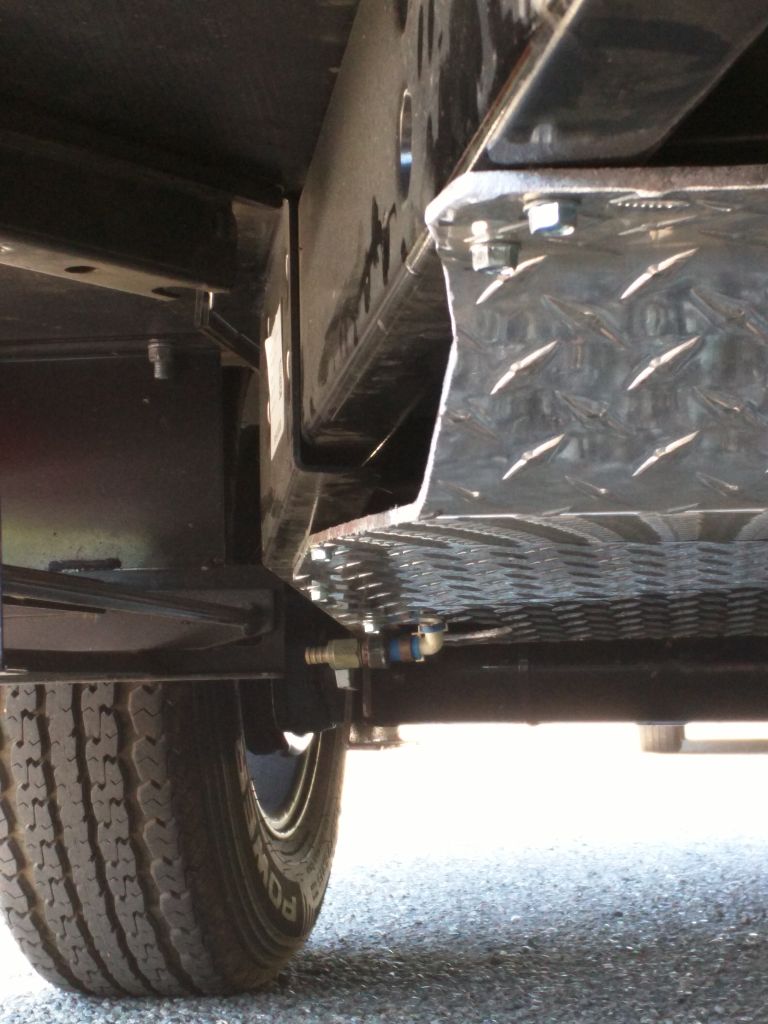 I plan to take the trailer on some gravel roads so I had the axle remounted to put the frame higher off the ground, and we added tough skid plates to protect the underside.  When I was choosing my T@B the optional Outb@ck package wasn’t available locally when I needed it, so I decided to make a few minor modifications instead.  Some of the stuff included in that package weren’t high on my list anyhow, like the interior and exterior trim/style, and the tongue box/rack which I was going to replace anyhow.

Raising the trailer made it look a bit more at home behind my Jeep.  It helped with steep driveways, and getting on and off small ferries.  On the rougher terrain it helped keep the frame and spare tire off the ground.  But the real challenge with rough roads is all the stuff you put inside the trailer and how much it gets tossed around.

We put two skid plates on the underside.  One in front of the axle and the other behind. Mostly this is to protect the water tanks and hoses, but it also protects the underside of the floor and its waterproofing.  The plates are quarter inch aluminum diamond plate, so they aren’t light and wispy.  Rocks and dirt always get on top of skid plates, so they are set up so that near the axle there is ample room for it to get back out.

I see a couple of nice scars on the front plate after the trip, not really sure when I collected them.  In New Brunswick I ran over some crazy metal thing on the road, and it got stuck under the trailer, and it was pretty clear that the skid plate had helped.  Even though the metal thing was aluminum at 70 miles per hour it could have done plenty of damage.

I had the work done by Chris and company at Truck Trails Northwest.

Front skid plate, from passenger side, note the cutout for water drain near the back

Rear plate. There is clearance betwen the axle and the plate for rocks to get back out if they get on top

Chris with the trailer prior to the trip.