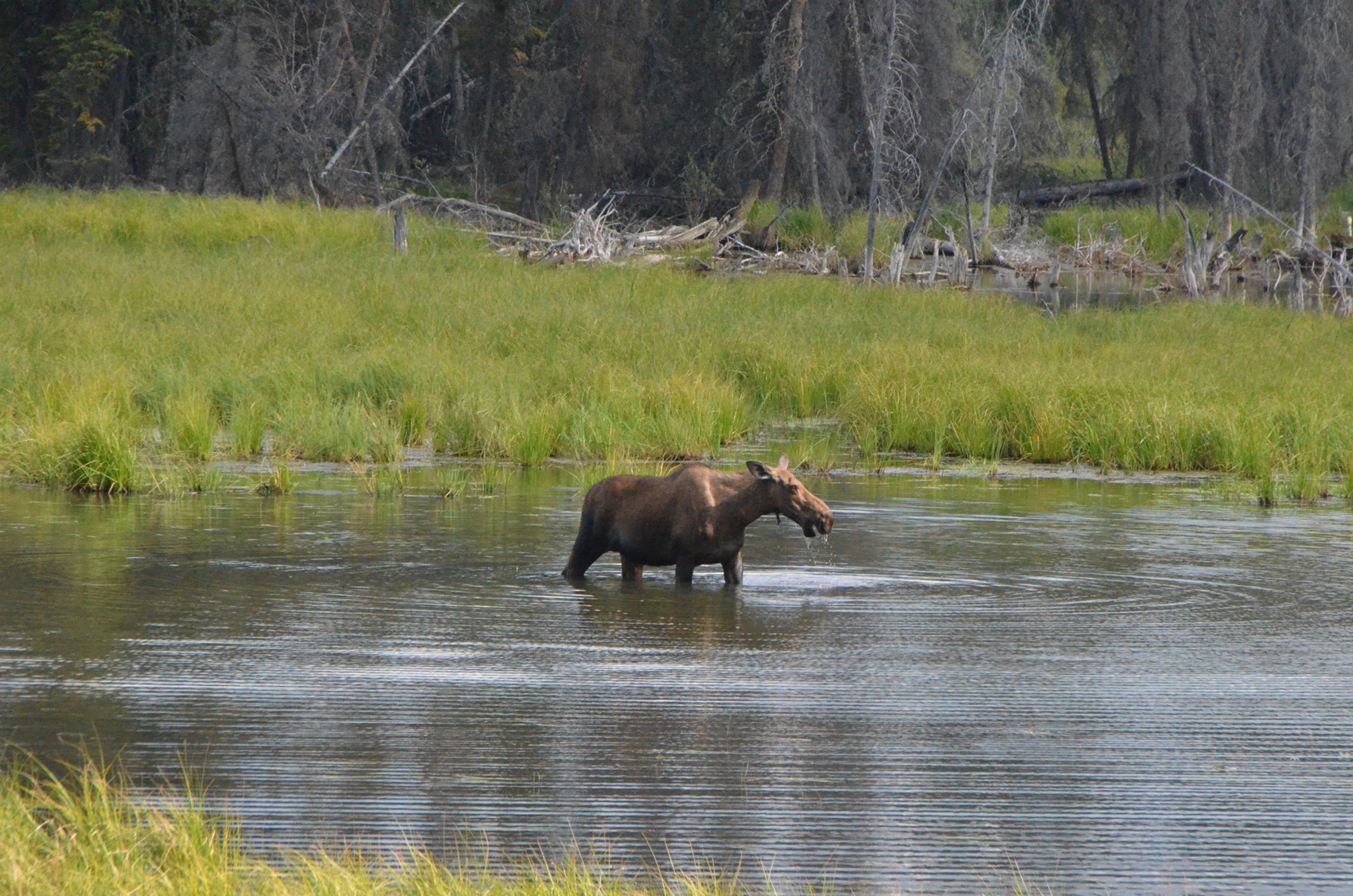 July 26, 2015 – Wrangell-St.Elias National Park and Preserve, Alaska – The biggest park you’ve never heard of, big, scenic and wild.  “At 13.2 Million acres, it’s the same size as Yellowstone Nat.Park, Yosemite Nat. Park, and Switzerland combined!”  Primarily wilderness there are only two roads of any significance totaling only 100 miles.  I got to drive and play along the Nabesna road and couple of nights stay at the Kendesnii Campground. 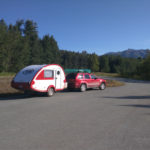 Coming out of Anchorage I wasn’t sure where I was heading.  The only plan in place for the trip south was “not the same road”, and since there are really only two roads, it was pretty clear what the route was.  What I didn’t have a clue about was what to see or where to stop.  At the end of a long day in Anchorage I found a nice wide pullout beyond Palmer on the Glenn Highway, the one I mentioned in the Matanuska Glacier post.  I had a little cellular service but pretty weak, but I had books and literature to look through.  Time to figure out where to go.

First decision, side trip to Valdez?  I decided against this, figuring it was pretty similar to Whittier and Seward, and seemed more oriented towards charter fishing.  So left and north and east along highway 4 to Tok at the next junction.  But where to stop for the night? 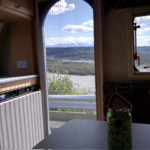 That’s when I started reading about Wrangell-St.Elias.  I was intrigued by the description of the 42 mile long gravel road heading into the north side of the park, and behold, a campground just under halfway in.  So I set my sites on Kendesnii Campground.

It was a pleasant day and I got what I later learned was a rare look at the big peaks of the park, including 16,237′ Mount Sanford and 14,163′ Mount Wrangell.  I had lunch at an overlook that gave a grand vista out of the side of the trailer, and enjoyed a quick nap in the warm sunshine before moving on.  Stopping at the ranger station I picked up a CD with a narrated tour of the road, and chatted with the ranger.  On to Kendesnii. 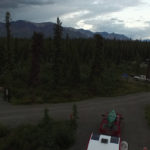 I found the small campground only partially filled, I settled the trailer in and then headed back out to drive the rest of the road.  It was in pretty good shape and pretty typical of gravel roads.  I was lucky in my timing,the road was damp but not wet, so dust and mud weren’t common.  But it was obvious that when there is a lot of water running off that the road would have some pretty wide and potentially deep channels of water crossing it.  I got two small crossings where you could see the bottom through clear water, but a third where the silty water was lapping at the floorboards.  But the bottom was rocky and the Jeep is pretty sure footed.  So no worries. 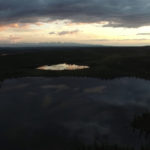 I should have put the canoe in here, but by the time I realized that the little swamp I had seen when I arrived connected to a much larger lake, that opportunity had passed.  Lots of birds here, and plenty of interesting plants and flowers.  The ground cover ranged from open meadows over frozen ground to middle sized trees in tight mixed forest.  There were plenty of streams and small ponds and lakes.  I am glad I enjoyed the sun the first day, as the second was much wetter.  I headed into Tok the second day (about 80 miles each way) while it was raining.  Driving in the rain without the trailer was a pleasant diversion, then dinner at Fast Eddies, some fuel and groceries rounded out the side trip.  Shortly after getting back on the pavement I spotted a moose very close to the highway and pulled over to get a shot.  Soon there was pretty good group of us watching. 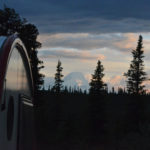 When I got back to the campground the rain was letting up, so I headed on to the end of the road again, and enjoyed an evening on the gravel.  I arrived back at camp as the sun was setting and the mountains were peeking out under the clouds.  It was quite a sight.  I put the drone up for a few minutes to grab a couple of sunset shots.

The gravel road seemed to keep the number of folks there to a minimum, and was great entertainment for me.  I enjoyed the slightly more rustic camping experience.

Wide pullout just outside of Palmer

There seems to have been some kind of large sign here previously.

Had I known how rare this view of these huge mountains was I would have taken time to get better pics.

A lot of the park and preserve is still used for subsistence lifestyle.

Map of the campground

Drone’s eye view of my site

This small dock was perfect for launching a canoe, but I was mistaken in thinking this small area was all the water.

Ducks were watching me and mom was herding them away.

Two birds in this snag.

This grass was very pretty

So many different flowers.

Jeep parked at a trailhead near the end of the road.

There were many trails in the area, lots of opportunity to make loops and avoid seeing the same ground twice.

A large culvert passes under the road here, looks like the water sweeps down off the mountain and likes to take this part out.

Looking up that stream towards the mountains. The water clearly makes a big impression here when it does.

These mountains are shield volcanoes, they are lifted up by the collision of two plates. The various colors are where the heat has transformed the rock.

One crossing that didn’t require four wheel drive, but was a lot more comfortable with it. Water is lapping at the floorboards. This shot from a video with a GoPro on the hood.

Washout coming down the mountain.

Look beyond the flowers at all the other foliage.

One of many “meadows” – probably only devoid of trees due to frozen ground below.

Looking at us viewers.

Second glimpse of the big mountains of the park.

Taller than Mount Rainier, this kind of volcano has more lava in it than other types, but eruptions are typically gentle and flowing.