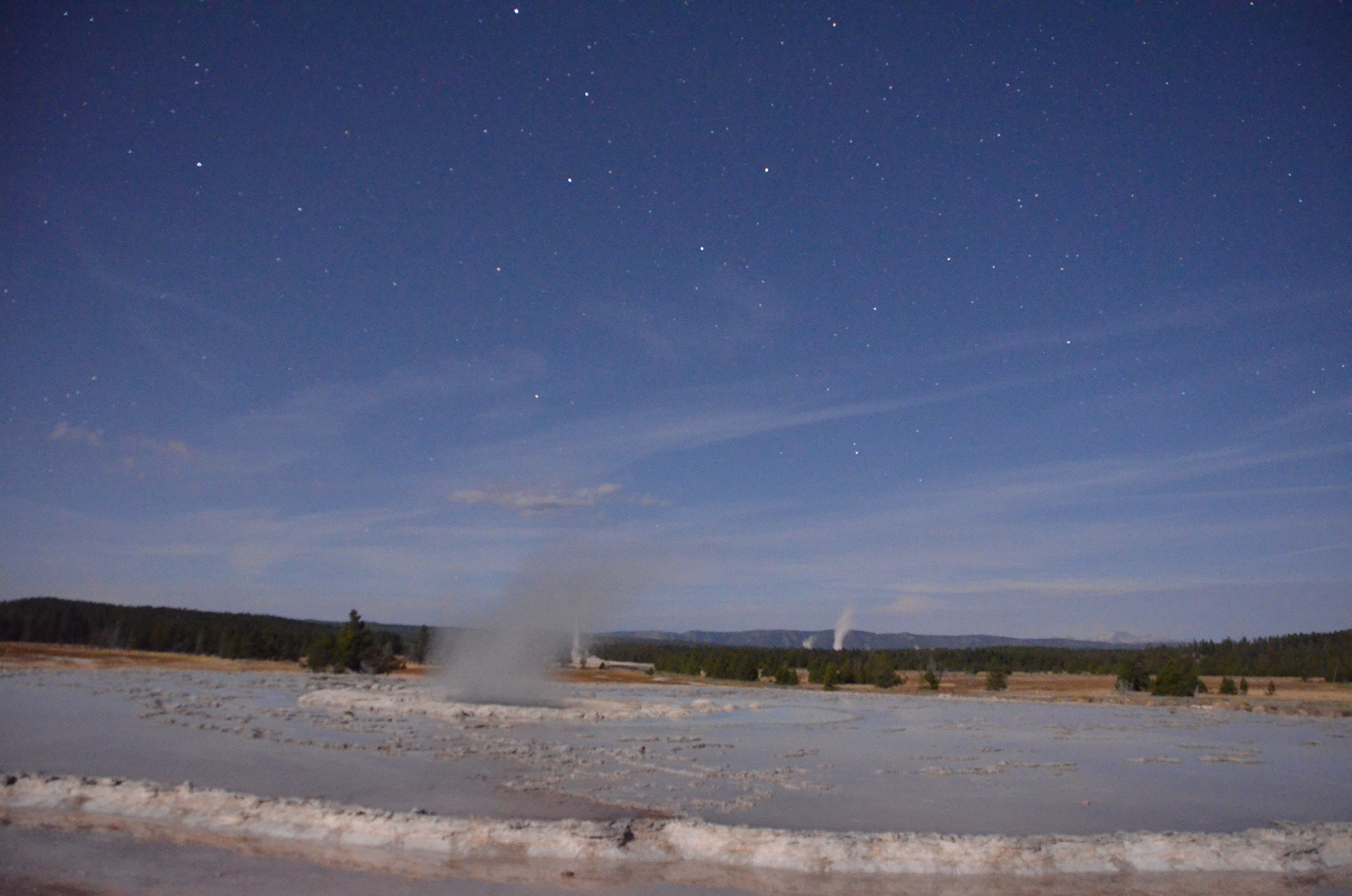 August 24-30, 2015 – Yellowstone National Park – (Above: Geyser under the moon) While traveling the grand loop I had my eye out for the little side trips.  This resulted in heading along some less traveled roads, since I didn’t have the trailer in tow. And with a bit more attention to the north side of the park which I haven’t visited as often, and a little night photography to cap it off.  For most of the adventure I was working out of a base camp, a few days in Madison, and a few at Fishing Bridge.  With no trailer, a low speed limit and most everyone keeping to it, it was pretty easy to let the few people in a hurry get on by and enjoy a nice drive. 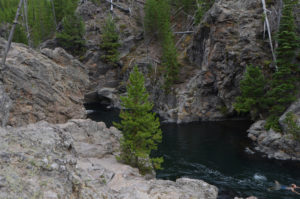 On the west side, near Madison I drove Firehole Drive several times.  A one way, one lane road that that follows the Firehole river through a small rocky canyon, there are two spots where you should probably stop and get out of the car.  First is Firehole Falls.  I remember coming here when I was little and being amazed at how many types of rodents there were here.  Chipmunks, tree squirrels and ground squirrels (my memory says there were many others, but unlikely) used to sit begging and everyone fed them.  Today there are still a few, and they make a pretty good living on what gets dropped from picnic lunches, but they act a bit more natural.

Around the corner is the swimming hole.  Very popular on a warm day, but not a lot of parking, they do have a couple of places to change up above the road.  People walk up the banks of the canyon a bit and float down through the deep part as the river moves lazily along.  There’s a big spot where the current is slow enough for plenty of people to swim, rocks to jump off, and space to climb out easily.  The narrow road widens just a bit, and there is a little room for cars to park parallel on the uphill side.  Too narrow for anything bigger than a large SUV or pickup, and with cars parked along the left, steep drop to the right, plenty of reason to slow to a crawl.  Late one warm afternoon I came through here and got a bit of a surprise.  The ladies who had squeezed their Yukon into the first possible spot alongside the road had their lift-gate open and were focused on hiding behind the car from the swimmers, pedestrians and people in other parked cars all up ahead of the car.  They seem to have forgotten about traffic coming into the area.

As I drove around the sharp corner their parked car came into view quite close, only three or four car lengths away.  At this point they were using their towels to dry their ankles, having stripped of their swimwear.  It took a moment or two for all of us to react to the situation.  I was already driving slowly but I hadn’t expected a car this close, when I realized what was also inadvertently on display.  As I say they didn’t react quickly either, eventually they stood up and pulled their towels to a slightly more concealing position.  Given that I needed to drive within a foot or so of them, I gallantly kept my eyes on the road, tried to keep from stopping and rolled slowly by.  I gave a bit of a nod to their sheepish expressions and returned their barely noticeable wrist wave from firmly gripped towels with a slight wave of fingers from hands firmly locked on the wheel.  Afterwards I replayed the scenario and considered all the less proper things I might have done or said. 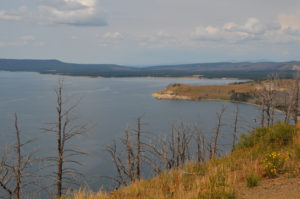 On the other side of the park, on one of my day trips I drove up above Yellowstone Lake to “Lake Butte Overlook”.  This short drive provides a nice view of the lake.  It rises up through standing, burnt but silvered, trees that tower over green bushes and grass below.  I saw several hawks here, working their way through hunting.  It is a short side trip but again one you can’t do with a larger vehicle. 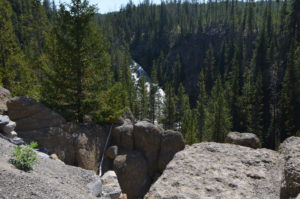 On the road between Canyon Village and Norris, in the center of the park I came across the Virginia Cascade Road.  Another one way, one lane road that follows a river, this time the Gibbon.  Impressive rock formations here are worth walking back from the parking area near the top of the cascade and this provides the wide view of the area, but through many trees.  But from the rocks you’ll be looking out at the tops of 100-foot-tall trees, such is the drop off.  The river rolls down this long flat bit of bedrock in a wide sheet, not the typical waterfall.  Further up the road folks were parked here and there for fishing. 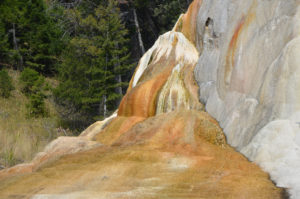 I spent some time exploring the north of the park this time, as I usually come in from the west or south.  So I wandered up to both the North and Northeast entrances taking in the differences of environment here.  I drove around the upper terrace loop, and got a nice view of some of the “flowstone” features here, as well as some views of the town below.  In Gardiner I crept through the construction to get a closer look at the work were doing to the original entry arch. 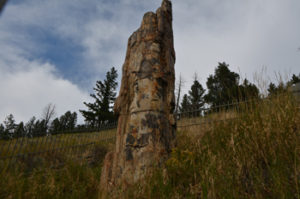 Along the grand loop from Mammoth to Tower, I found a couple of side roads, and my first unpaved road in the park.  Blacktail Plateau drive is about a six-mile windy unpaved road that meanders through the backcountry.  Much of this area has seen fire and so the forest is young and views are wide.   Just down the way a couple of miles is a spur that heads over to the Petrified Tree.  I hopped out for a picture or two and back on the road to Tower.

All the times I’ve been through Tower, the parking was so mad that I didn’t stop.  But this time it was later in the day and parking was easier.  So I stopped and finally got to see Tower Fall.  I had a nice bit of ice cream here and passed the time in conversation with a fellow traveler.

I typically didn’t head home until after dark, and the moon was near full.  So when there weren’t so many clouds I spent some time experimenting with night photography.  Much of this didn’t turn out so well, but the best shot was over on Firehole Lake Drive.  The shot of Great Fountain Geyser illuminated by the newly risen moon allowed stars to show in the sky as well.   That is the featured shot for this post.

Looking back up the canyon from water level, the big pool is behind and to the right.

Storms are quite scenic as they pass through the Hayden Valley

Brink of the upper falls (not visible in previous pic)

Top of Virginia Cascade on the Gibbon River.

You park right alongside the river.

A short walk back along the road

to the rocky viewpoint.

A closeup of the middle of the cascade

Looking down from the rocks

And out towards the cascade.

Jumbled rocks along the approach to Mammoth.

Looking down at the town of Mammoth

Right out of the car window

The ultimate in convienient driveby photography.

Upper Basin from below.

The road was passing by the arch as they did restoration on it.

I guess it is appropriate that I mark the half way point, having been above the arctic circle so recently.

Not the first I’ve seen, but often they are laying down where you see them.

Lots of flowers along the way

Basalt columns across the canyon near Tower Fall.

Impressive rockwork on the downside of the road here. See how the wall rises directly above?

This is looking up from the middle of the road.

Above the fall closer

The fall itself closer

I saw this spring back when it used to surge as described here.

Moon rising as the sun sets.

Clouds lit by the moon in Hayden Valley.

One Response to Yellowstone (2 of 5) – The Tour

Yellowstone (1 of 5) – Old Faithful Area
Next