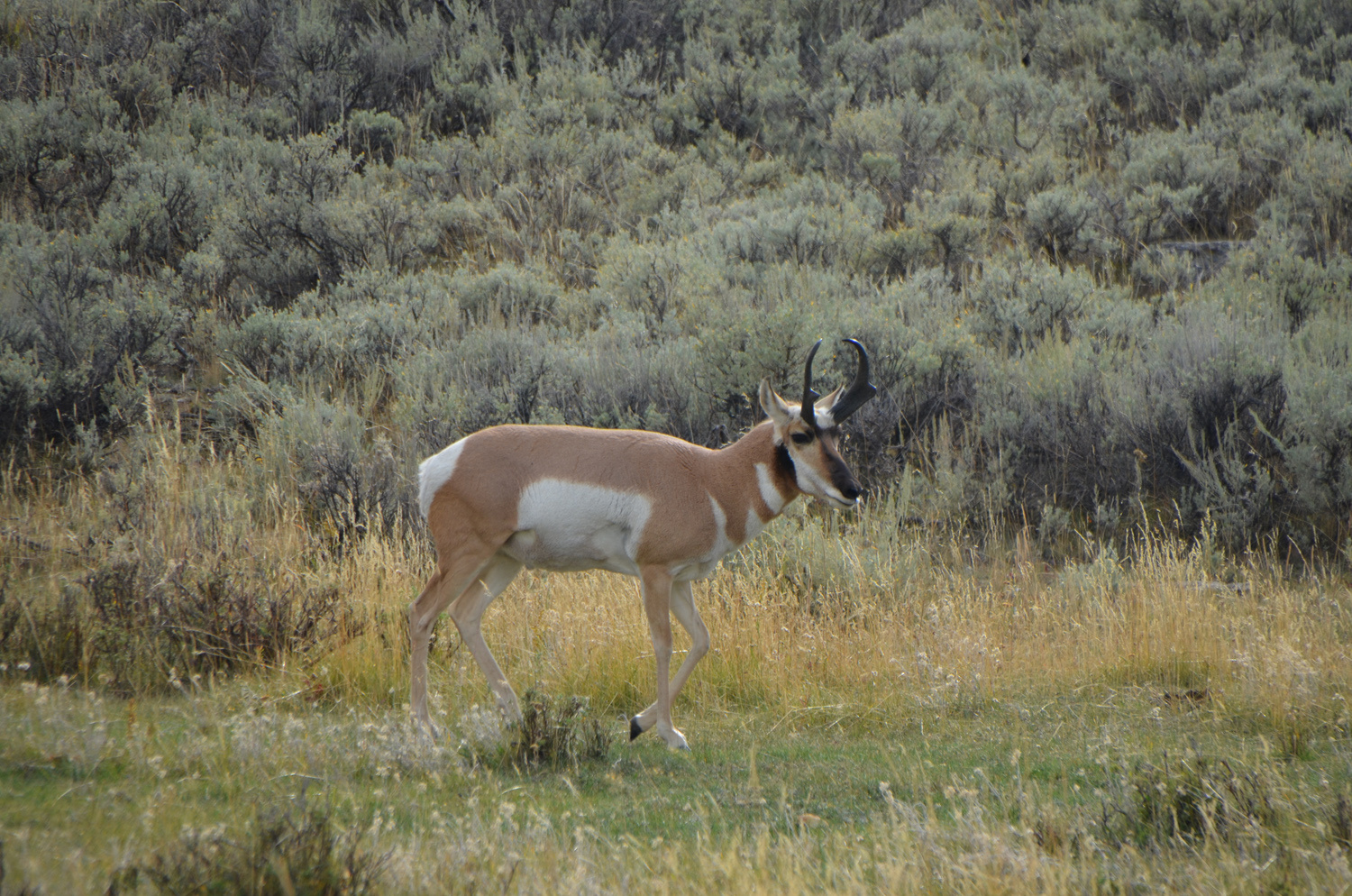 August 24-30, 2015 – Yellowstone – This is Yellowstone post number five, “Other Animals”.  Elk, pronghorn, fish, wolves, sheep, deer.  Yellowstone is a great place to see wildlife.  Little guys like chipmunks and squirrels are everywhere and like the birds are very interesting to watch, always active, always doing something. 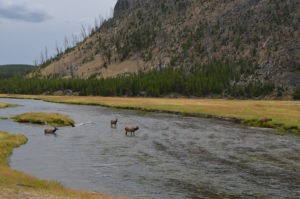 The Firehole river valley was home to a lot of elk and a few bison.  I heard the elk from my camp at Madison, and when I left the camp and drove down the road just a bit, there they were crossing the river.  I would have like to have seen some males, and had I spent a little more time in the northwest corner I’m sure I would have. 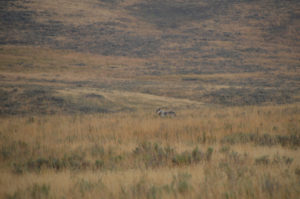 I think the big excitement of the trip was seeing a wolf trotting across the prairie.  Word had gotten around that some wolves had been seen hunting off to the east of the road across the river in the Hayden valley the day before.  So a lot of people were parked watching that area.  I was one of them. The whole crowd was facing the east side of the road, everyone was scanning with binoculars and spotting scopes and long lenses.  I had been there for over an hour, and was talking to some people, when someone to the south of the line hollered at us “wolf” and pointed exactly the opposite direction we were all facing, at the other side of the road. 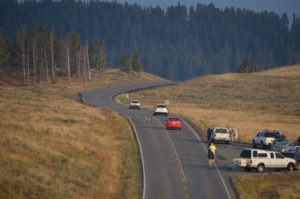 The wolf was indeed trotting along across the prairie heading almost right for us.  But he changed his course a bit as we all turned and started gathering to watch.  He headed to our left and it was clear he had intentions of crossing the road and continuing to the river and beyond, the place had expected the wolves to gather. A bit of a crowd had stopped at the next area and seeing them he pulled up short again and headed a bit further away.  Finally, he broke into a run and darted across the road between cars, and up the hill on the other side, into a little draw and disappeared.  All in the course of maybe a minute. 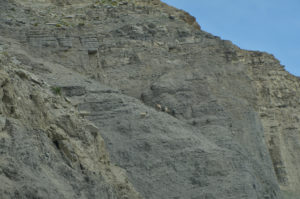 In the northwest corner of the park between Gardiner and Mammoth, there are some very beautiful rock formations.  Inhabiting these open rocky places are bighorn sheep.  The one time I was in the area I managed to stop and get one picture, but the road side was packed and I didn’t want to stay in the middle of the road for more than a moment.  I saw a lot of sheep in Alaska, so I took the one long shot out of my window and moved on before another car came along. 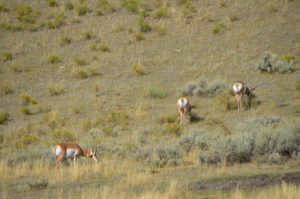 On the road out to the northeast entrance, there are a lot of pronghorn often in the same areas as the bison herds.  I learned later that these guys don’t graze on the grasses like the bison and deer, they are specialists and prefer the plants that flower.

My first encounter with a pronghorn on this trip was a single individual. (see featured image at top of this article)  I had stopped by the side of the road and walked a short bit out to see the prairie close up, and as I came over a low rise there it was in a wide flat area.  It didn’t seem interested in my presence but it started moving at right angles to my path, and I stopped to avoid discouraging it from going where it wanted.  As it wandered I found myself backing up to keep my distance, but the movement gave me a lot of opportunities for varied photos.  Of course after this first encounter, I saw them everywhere, but none quite as close as that first one. 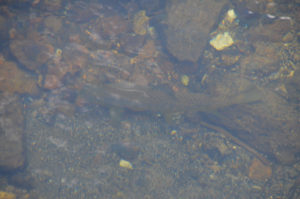 It is surprisingly easy to get to see another type of animal, a fish.  In Yellowstone much of the fishing is catch and release, so fish don’t get harvested and they get big and populations are high.  I found that nearly every walking or car bridge that I stopped at, I could look over on the downstream side and see fish lounging behind pillars and rocks.  This was especially true when the bridge was casting shade on the water.  I’m certain that a little polarized glass whether eye glasses or a filter for the camera would have gone a long way towards letting me see even more.  Several times when I stopped I was able to help other folks see the fish as well.  I recall one lady, a bit older than me, for whom the experience appeared to have been a pinnacle of her trip, sort of made my day.  So, my favorite spot for this is Fishing Bridge at the start of the Yellowstone river at the outlet of Lake Yellowstone (from which fishing is no longer allowed).  The bridge has a separate walkway for people and there are many piers for the fish to hang out behind.  If you watch for a while you will see the fish rise to eat bugs that are floating along on the surface. 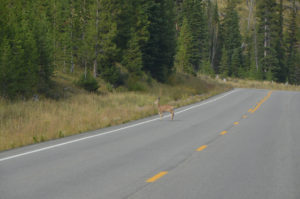 Along the road to the Northeast entrance the prairie gives way to more trees, and here I started to see more deer.  Often crossing the road, they are a good reason to keep your speed low at dusk and nighttime.  Since they are often just right in the road I found it harder to get photos of these guys, and certainly photos of them doing their natural thing rather than bounding up a hillside away from the road.  The one I did get a photo of appears to be younger as it still has its spotted coat. 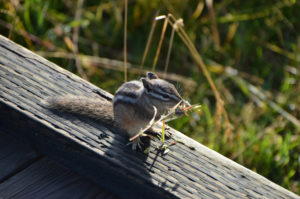 Now all that said, I really enjoyed one particular encounter a lot.  It was with a chipmunk at the mud volcano area.  It was morning and not so many people around.  The chipmunk had a long stem of a plant and was sitting on the raised edge of the boardwalk.  He was systematically working his way down the stalk taking the good parts off, eating some and letting some fall.  By the way he was doing it, unconcerned about my close proximity, I had the impression of someone eating an ear of corn at the state fair.

The more people looking out the window the higher chance you’ll spot wildlife.  So I’m sure with me, only one person, looking as I wandered, I likely drove past a lot more wildlife than than I saw.  Previously I’ve seen bears and moose too.  So when you visit make sure everyone is on the look out.

You can see his radio collar well in this photo.

He eventually found a place to run between cars and get across the road.

Fishing Bridge, look for fish downstream of pillars waiting for food to pass by on the surface.

Chipmunk at Firehole swimming area was getting plenty of dropped cracker crumbs and such from people who had been picnicking.

This chipmunk was pretty unconcerned with my presence and was working his way along this stem of grass.

Near the end of the process. Reminded me of someone eating an ear of corn at the state fair.

The following are a set of pics my son William Reed took while we were in the Hayden Valley in 2012.

This white wolf crossed in just about the same place as the wolf I saw in 2015.