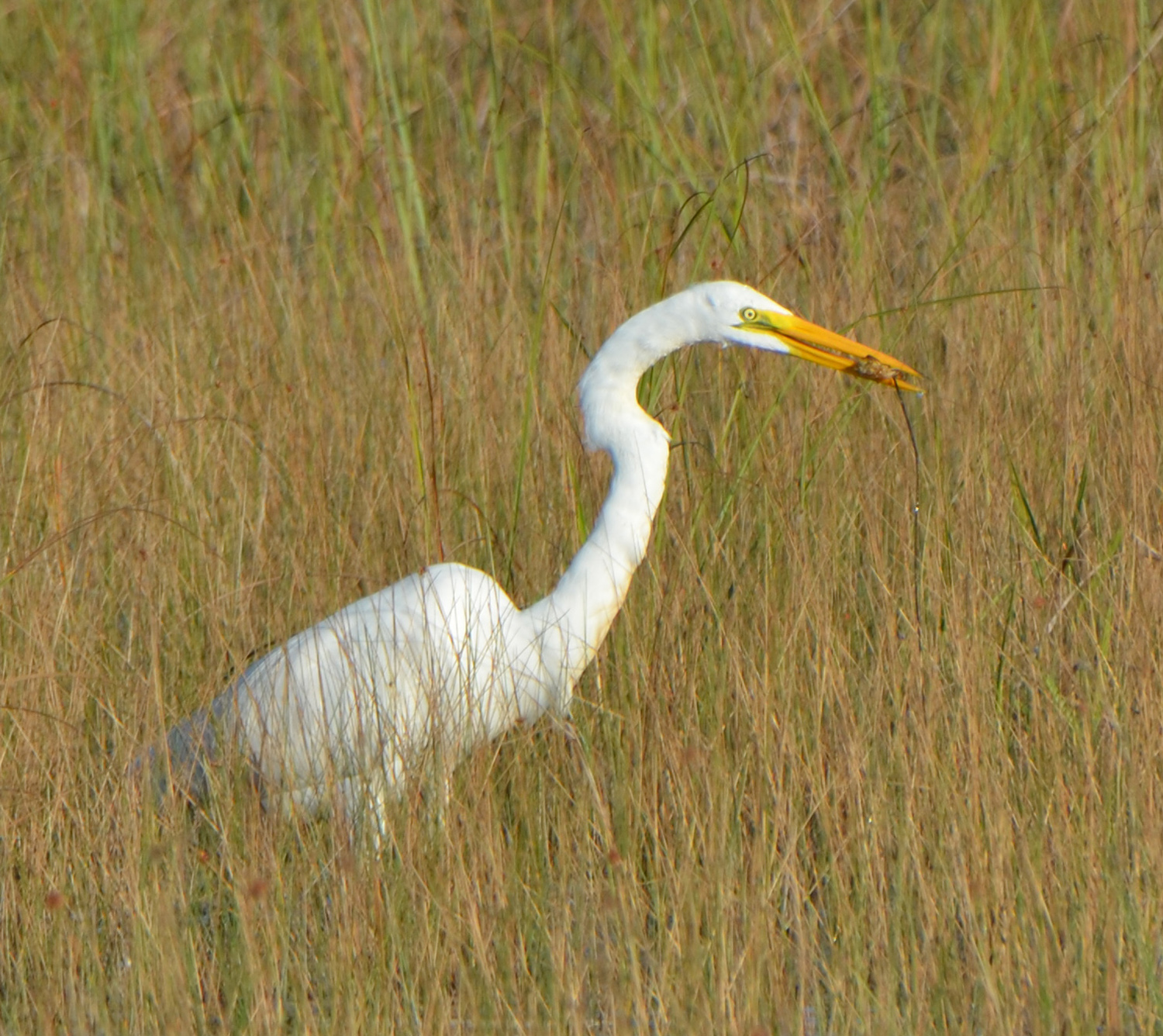 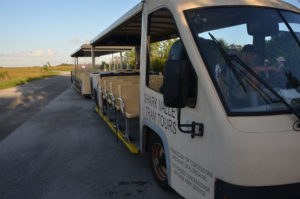 November 8th, 2015 – Everglades National Park –  This is Everglades Post 3 of 3 about “Shark Valley”. I arrived in time to take the last tram tour of the day. Highlights include Alligators, wading birds, algae, a viewing tower and a river of grass. Like the Flamingo Post, don’t expect sharks in this one.  The other two posts in this series are Flamingo and Everglades City 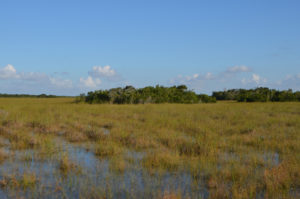 Shark Valley is named for the river that it feeds, the Shark River, which is a bit distant. So rather than Shark River Valley the name here is just Shark Valley.  Now Valley itself may be a little hard to envision here, the land  is about as flat as a pool table.  But it doesn’t take much to keep water going in one direction. So five or ten feet of elevation on one distant side and maybe 50-100 feet of elevation on the other and you get a many miles wide flat area with water moving at about a foot per hour, inexorably towards the gulf coast.

The way to see this area is via a Tram, or bike or walk along a paved path.  I planned to take the tram.  I arrived just in time for the last tram of the day.  Being a late comer I just stood in the rather amorphous line at some random place hoping to get a reasonable seat. I hadn’t thought it through, I was just polite and figured I would sit wherever I ended up and be happy.  But it turned out I got the best seat on the tram. Thing is that you board four or five to a row and the first people on are on the “inside” of the loop. The last people on are on the outside (the tram goes clockwise around a loop road) and that is the driver’s side. The driver is facing forward and he is the one who is watching for wildlife.  So when he sees something he slows and stops, and it was most often on his side and he most often only managed to stop at about the fourth row of the first car. Which of course meant right in front of the last guy to board the tram, me!  He did pull forward to let the second car see but often the action was over by then. 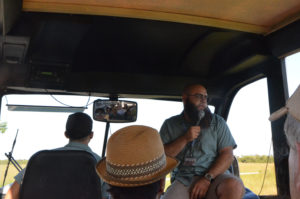 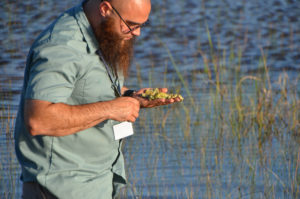 The guide who was narrating was very good, smooth and informative, it was clear he knew what he was talking about and could probably add a lot more if there was time.  I want to say his name was David. One comment he made was very interesting.  He reminded folks who were translating for others that people nearby would be trying to listen to him as well, and to be considerate of others.

At one point in the tour he took his shoes off and waded out in the water to gather some algae.  He brought two types for us to touch, one type that grows on the bottom underwater and another type that attaches to grass stems and lives on the surface. They were surprisingly not slimy, but rather like a sponge.

He also showed us some snails that live there. It seems the snails have been having a hard time reproducing. The water levels in the whole of South Florida are highly regulated by a system of canals and gates and dams.  The snails have been programmed by nature to “expect” a natural rhythm of water levels, however the water levels in the everglades no longer follow any natural rhythm.  So the snails lay their eggs on grasses at a certain height according to instinct, but the water levels end up either being too high or too low.  So the eggs don’t hatch or they don’t survive. 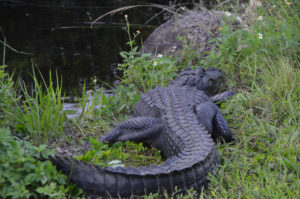 We saw a few Alligators, again, right in front of me.  But the last one we saw was perhaps the most exciting.  It was getting dark and this gator was out on the pavement a bit. The tram takes up a good part of the road, so we had to pass pretty close. He started walking and then opened his mouth and started hissing. That’s the “I’m a mad gator” dance, so that’s when we high tailed it out of there. 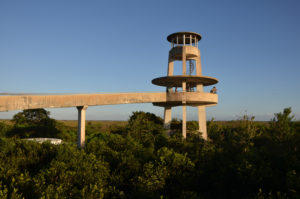 Along the way we stopped at a viewing tower.  A long ramp leads up in a long spiral, and just the tower and ramp are pretty neat. The view is of endless waves of grassy “river” and clusters of trees.  There were also some deeper ponds of water here.  From the top you could see out to the horizon the river of grass, and here and there the bright white wading birds were little isolated dots scattered about.  Trees grouped in clusters and the paved loop road running off to the north.

Speaking of trees, they typically grow on slightly higher ground. The Cypress trees like their feet wet, but the hardwoods want something a little dryer. These clusters of trees are called “Hammocks” just like the thing you sling between a couple of trees or posts in which you might recline. 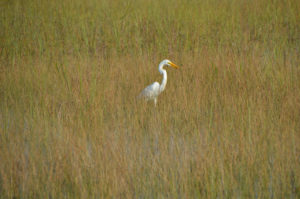 Ah, another thing to note.  All those white birds, they really stand out against the green, isn’t that a bit of a problem for survival?   Well as it happens it is really good for a bird that is looking for food in the water.  The prey is looking up and anything dark against the bright sky would be a warning.  But a white thing blends in.  So, white isn’t a bad thing.  Blue?  Well best if you are against a blue or gray sky, eh?

Great way to see this area, via tram. Otherwise a bicyle would be a great choice.

River of grass, this water moves about a foot a day. Note the hammocks of trees.

This land is a little higher and so a little dryer. One big cypress stands alone.

Cypress Hammock, small by comparison to what we’ll see tomorrow in the cypress swamps.

I believe this is a white mangrove.

And we stopped with him right beside me.

We pulled up here

And our guide took off his shoes and went wading.

Showing us a snail.

Algae on the bottom.

Algae around the stems of the grasses.

Bringing us algae to examine.

Feels spongy and not slimy.

Heading for the viewing platform.

Up the curved ramp

The spiral stairs are gated off, so only the lowest level is open. But nice view from there

Looking out from the platform

Folks coming up the ramp

White bird along the road.

Selfie. The slight wind was most pleasant as it was warm and humid.

Looking down on a pond.

Sunset on a full day.