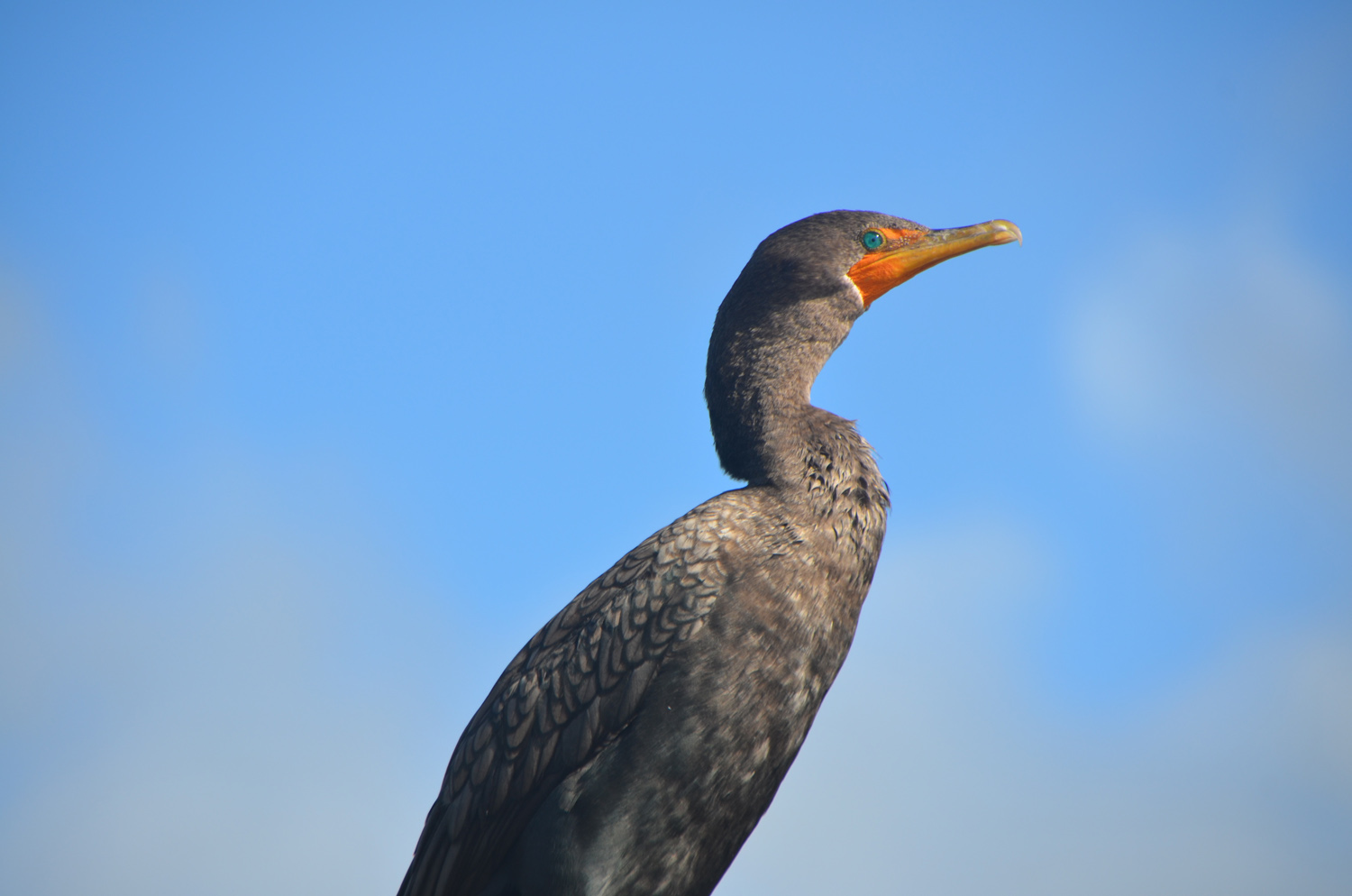 November 8th, 2015 – Everglades National Park – This is Everglades post number two, day two out of Everglades City.  I took two tours out of the Gulf Coast Visitor’s Center at the west side of the park.  One trip was up the Turner River and then up a creek under the canopy of the Mangroves.  The other was out into the ten thousand islands towards the Gulf of Mexico.  Highlights included Alligators, Roseate Spoonbills, Dolphins, Bald Eagles, and both diving and wading birds a plenty.  Oh, and a Raccoon, plenty of Banana Spiders and many wonderful trees and plants.  This is post two of three, the others are about the Flamingo area, and Shark Valley. 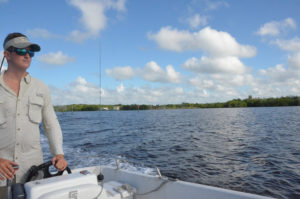 The first tour was back into the Mangrove Wilderness.  This tour was aboard a smaller six passenger boat with a rear console for the guide/captain.  Across the bay, under a bridge, through some open interior water and up the Turner river we powered along and stopped occasionally for some narration and observation of wildlife.  Along this part of the trip we saw Royal Terns on most of the marker posts.  They say this bird is “nature’s weather-vane” as they stand facing into the wind, of course many other birds do this, but given its markings, none do it with such style. 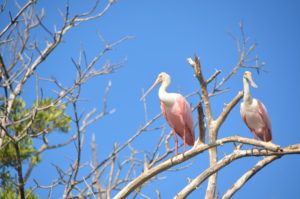 We also saw a group of White Ibis perched in the mangroves.  In the group was an immature bird with brown body and white spots.  The Ibis are strong fliers and are the last to leave before a hurricane, and first to return.  They use their long bills to feel for food in the mud, the bills have nerves like your finger tips.  Along the river we also saw a pair of Rosate Spoonbills.  These birds forage in the shallow water by waving their bill back and forth.  Their pink coloring comes from the shells of the crustaceans they consume.

Up the Turner river we came to a smaller stream and into the Mangrove “tunnel” we went.  The mangrove trees on either side put down roots trying to close off the channel but the steady flow of the stream and the back flush of the tide keeps this channel deep, and the tour company probably does a little trimming here and there.  The roots of the red mangrove are distinctive as they rise above the water/ground and leave open areas underneath.  The Black Mangrove’s roots however send shoots up from underneath the ground as if someone had poked hundreds of pencils into the ground all perfectly straight. 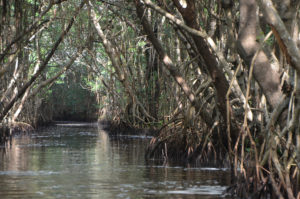 Along the roots that reach into the water, there are small crabs to be seen.  They have really good camouflage and are in a pretty dark setting so pictures didn’t come out.  As the trees get closer together we can see the webs of the large banana spiders above and to the side.  They are mostly of a size where they would fit in your palm, maybe a little larger, but certainly not small. 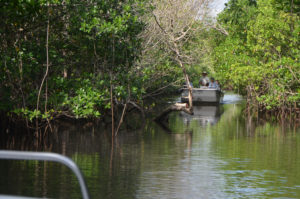 We pass a couple of other boats coming back down the creek, a wide spot and the exchange of a few quiet smiles and hand waves and we are on our way.  Something about the different environment instills a natural hush on even the youngest passengers.  We spot a few Alligators along the way floating in the water, as we stop for pictures the gators aren’t not very interested in us. 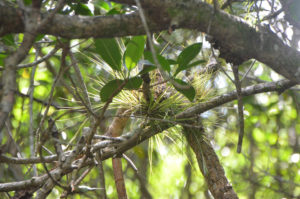 The still water reflects the canopy and the highlights from dappled sunlight filtering through.   Ahead we hear a stir and a heron flies down the narrow tunnel ahead of us and disappears around a turn.  Later on the way back we see the heron standing back away from the edge of the creek in the trees.

Near the end of the creek we turn around under a tree that has many air plants or more properly – some form of “Bromeliad”.  These plants live in the nooks and crannies of trees and are generally not harmful to them. 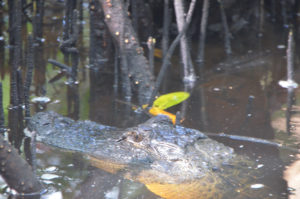 Near the exit of our mangrove tunnel the three folks from Estonia at the front of the boat got quite a treat.  They had never seen a raccoon, and a small one scurried across the branches just as we started to pass under the arch.  The raccoon was quick, so no one got a picture, but the smiles told all, this was an event for them.  Of course those of us at the back of the boat swapped stories about just how easy it is to shine a flashlight off your porch and see these eyes staring back, but we kept our voices down so as not to spoil the moment. 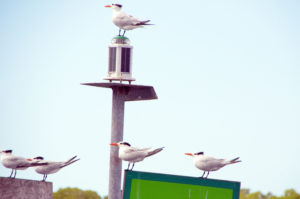 The tour out in the ten thousand islands was on a pontoon boat.  We passed many keys and the guide explained how the mangroves were responsible for the creation.  He pointed out the keys that had grown up on the dredgings from the navigation channel, and how many of the older keys had oyster beds along their outer shores.  He assured us that there was little “land” in these keys, and that behind the shell bank was more mangrove roots and water. 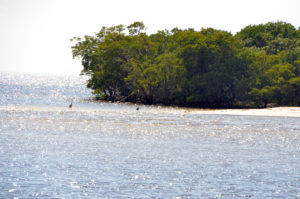 Near the gulf we encountered one other kind of key, these are barrier island keys.   These islands are made of sand, rather like dunes along the shore.  They too have plenty of vegetation, but there is dry land behind the edge of the forest.  In the bay we saw a group of dolphins herding a group of fish into a small area as a hunting technique.  They came close to us a couple of times, and there was a young one in their midst and we assumed they were teaching it to fish.  The young dolphin was somewhat playful and popped up out of the water a couple of times. 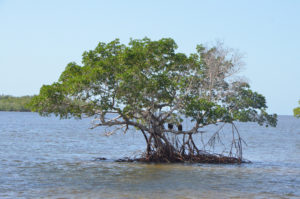 Near the Gulf there is a small key, pretty much a single tree on a shallow bit of land, that is home to a pair of Bald Eagles.  When we passed by on the way out, there was one eagle sitting in the shaded branches, on the way back we saw the other of the pair fly in and join it on the perch.  While I got a least one good picture I had been shooting in the dark of the mangrove tunnel recently so I had the camera opened up a couple of stops and most of the pictures were pretty washed out.

Our Guide on the Mangrove Wilderness Tour.

Mangroves along the Turner River.

Royal Terns typically face into the wind, and in their stylish way are known as nature’s weathervane.

A female Anhinga. The “snake bird”, is a diving bird.

More of the Ibises on the branch above.

Their color comes from the crustaceans they eat.

And they’ve had enough of us.

Vulture of some sort?

A turn in the Turner River.

We reach the stream and turn in under the mangrove tunnel

We met a couple of boats coming out. It was interesting how even the youngest kids were quiet here under the mangroves.

Black mangrove roots look like pencils sticking up from the ground.

Aligators here and there.

Many airplants. They don’t particularly help or hurt the trees.

Small tri-color Heron was trying to keep away from us.

Is a little more interested in us as we slow down.

Now, out in the islands, second tour.

Mangroves have colonized the dredging from the navigation channel.

And the herons love the mangrove roots as a place to hunt from.

The youth was pretty playful.

Oyster beds form a ring around the island.

Barrier Islands have sand below

The birds wade and hunt here too.

Everglades (1 of 3) – Flamingo Area
Next