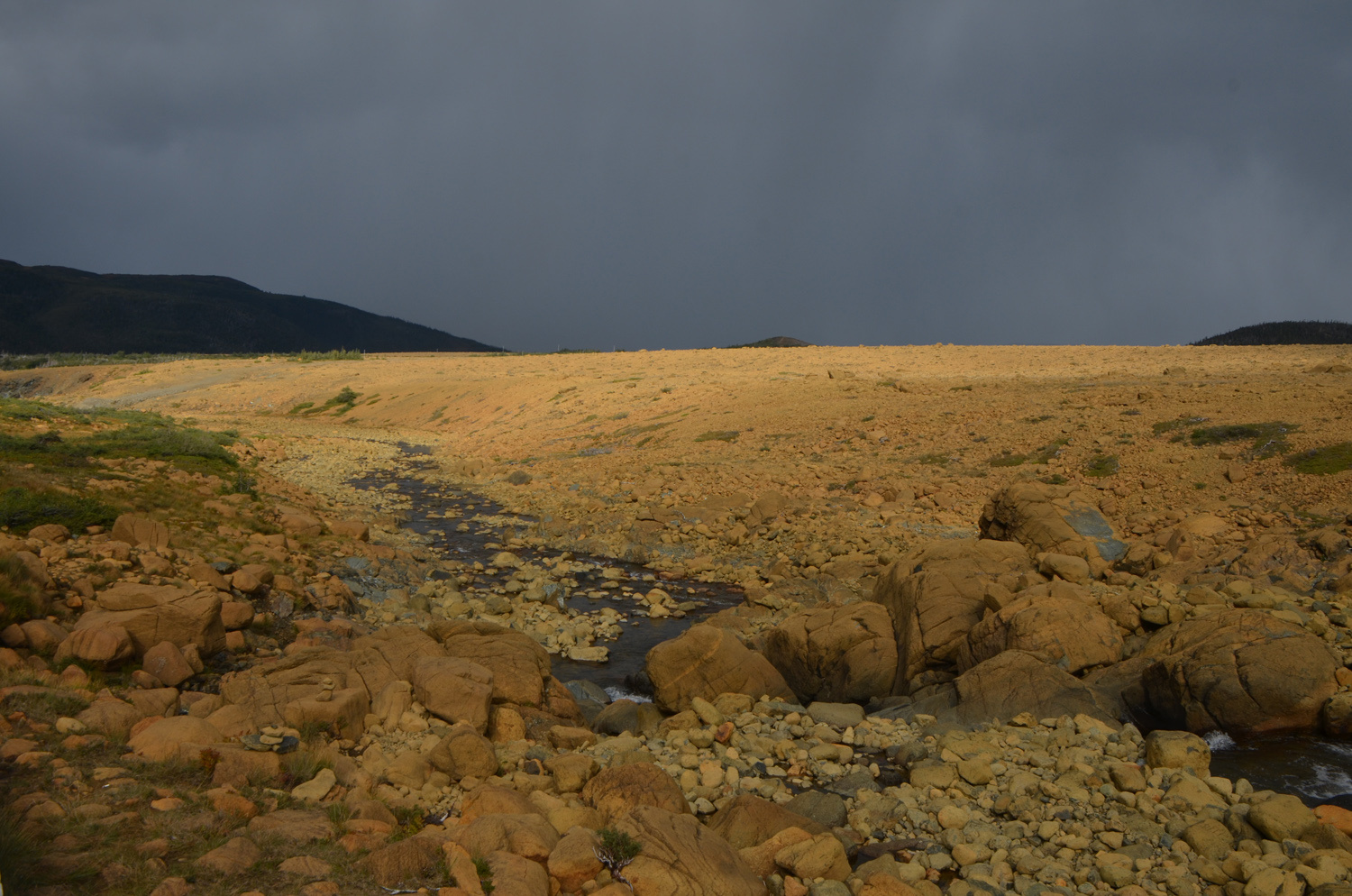 September 26th, 2015 – Gros Morne NP, NL Canada –  The Tablelands is worth a visit.  This area of Gros Morne National Park in Newfoundland is a bronze barren section of the earth’s mantle left exposed as tectonic plates have drifted.  The relative lack of vegetation and the unusual color make it feel otherworldly. 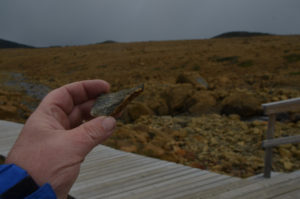 The bronze colored rock is called peridotite.  It is actually greenish in its natural state, and only this color because of being exposed to air, effectively rust.  The ground here is covered with a jumble of small and large rocks, mostly of peridotite, but with some others left behind by glaciation, floods and the like. 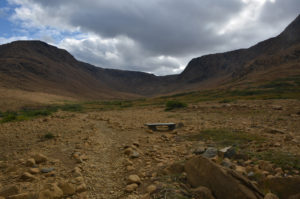 The trail heads north from a small parking lot, and follows the course of an old road.  It turns up and to the right to follow the drainage of a large bowl to the east.  In this last bit it changes from a gravel and rock path to a boardwalk bordered by low junipers and other hearty bushes.

There isn’t much here to slow the wind.  On this day it was a few degrees above freezing and the eventual precipitation came as light snow and small snow pellets.  The snow skirted around me while I hiked until the last few minutes of the hike.  It wasn’t much at this elevation, but on here and there on the hills a temporary accumulation turned them white. 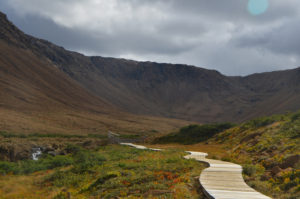 The boardwalk ends at a platform with a couple of small benches overlooking a set of small waterfalls in the nearby stream.  It is built upon the yellow bronze bedrock and the edges of the boards are cut to fit the natural shapes.  The circ is laid out before you, with the headwall over a mile away.  Today the sun was coming and going through broken clouds, so with the sun and shadow constantly shifting the view was never the same. 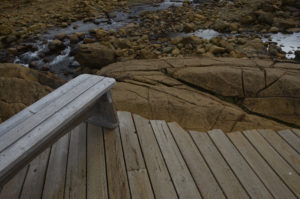 As I had hiked up I had been aware that the wind was at my back, and I knew that on the way down it would be in my face.  As I came back I could see an advance scout of the snow front passing just a half mile to the north.  With the strong winds it seemed only inevitable that I would see snow crest the top of the ridge heading my way.  The next place I saw snow was a couple of miles to the south, and it wasn’t long after this that I could watch it come over the ridge and start falling around me.

I managed to hike most of the trail back to the car before the snow was really falling hard.  The soft tics of small pellets accompanied me the last ten minutes or so.  As the snow started to fall I grabbed my bear bell from the back of my pack where it was largely silent for this wide open, barren, landscape.  I started jingling it, but alas there wasn’t anyone around to appreciate the humor.

From Lobster Cove Head, look closely you will see the cruise ship.

This cruise ship was anchored in Lobster Cove.

Folks were coming ashore to visit Gros Morne and other local attractions.

A small cairne along the trail.

A low bench made of rock.

Hearty plants are all that survive here, and here only because there’s a bit of a low spot which amounts to “shelter”.

Berries on the bushes.

Boardwalk as you approach the end of the trail. Note the rail in the distance, that’s alongside the wider deck area.

The end of the trail.

All this yellow “peridontite” rock is actually green before it is exposed to air. This piece had been broken by someone and left on the bench.

Compare inside to outside of rock.

As the clouds passed over the scene changed constantly. Here the stream is highlighted by the sun.

The stream had small falls near the end of the trail.

Anotehr view of the valley

As the weather moved in this scene unfolded. Purple clouds dropping snow passed behind this hill, and a break in the clouds illuminates the yellow bronze rocks.

What may seem to be a path, may turn out to be a road.

Gros Morne National Park (1 of 2)
Next